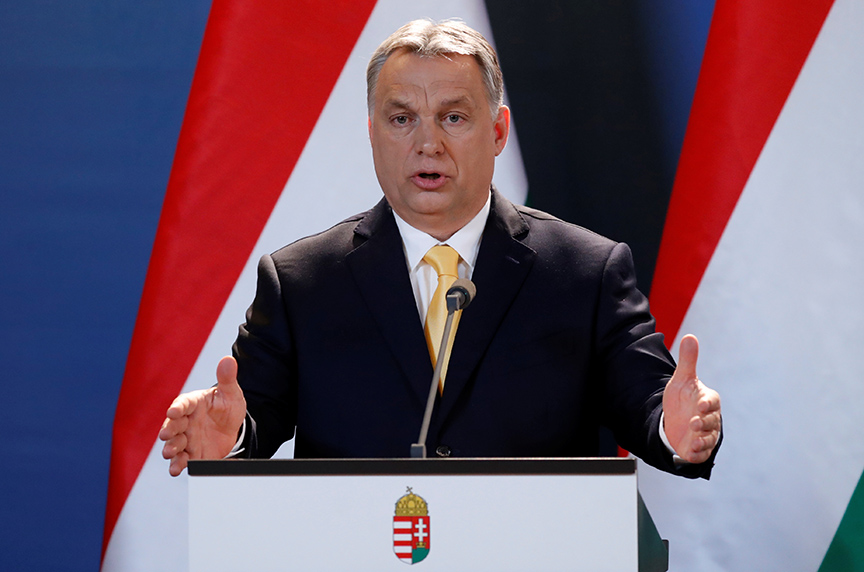 Hungarian Prime Minister Viktor Orbán addressed a press conference in Budapest, Hungary, on April 10. Orbán won a third successive term in the election on April 8 consolidating his grip on power and triggering a wave of resignations among senior opposition figures, including the leader of the biggest opposition party in parliament. (Reuters/Bernadett Szabo)

Fourteen years after Hungary joined the European Union—a celebrated and significant milestone for the post-Communist nation—the country’s deviation from the EU’s shared principles of democracy and freedom is both a source for concern and a warning sign for others following suit.

On April 8, Hungary re-elected Viktor Orbán to his third consecutive term as prime minister. Despite a record turnout of approximately 70 percent in this year’s election, Orbán and his far-right Fidesz party managed to win 67 percent (133) of the seats in Hungary’s 199-seat parliament. By obtaining this two-thirds majority, the seemingly unstoppable leader has secured his ability to make at-will constitutional changes without opposition support, continuing his reign of power.

Orbán, who coined the term “illiberal democracy,” has spent the past eight years in office championing an increasingly authoritarian populist agenda. He has masterfully enacted a series of measures to dismantle Hungary’s constitutional democracy that have involved anti-migrant policies, restrictions on the freedom of press, and controversial changes to Hungary’s constitution.

In 2011, Orbán used Fidesz’ parliamentary supermajority to redraw the lines on Hungary’s electoral map, making it difficult for opposition strongholds to prevail. Last year, one of Hungary’s largest independent newspapers was shut down overnight and sold to a pro-Orbán company—just one example of the “crony capitalism” he has engendered in Hungary. At the height of Europe’s 2015 migrant crisis, Orbán’s government erected a fence at Hungary’s southern border to keep migrants out and preserve the country’s “ethnic homogeneity.”

While Hungary boasts one of the lowest levels of refugee intake in the twenty-eight-member EU, Orbán’s recent election campaign was focused almost singlehandedly on the migrant issue, stoking fear and xenophobia in Orbán’s adoring base of constituents.

Speaking at his campaign’s closing rally in Szekesfehervar (a city in the northwest of Hungary) two days prior to the election, Orbán said: “Our country’s safety is at stake, which is why it is imperative we protect our borders… migration is like rust that will slowly but surely ruin our country. It will first hurt our economy… then compromise our safety… and then infiltrate our culture.”

Over the past few months, Fidesz campaign propaganda posters plastered around the country depicted the word “stop” against a backdrop of migrants wrestling to pass through a border. George Soros, a Hungarian-born Jewish financier and philanthropist, who founded the Open Society Foundation and supports open borders in Europe, was vilified throughout Orbán’s campaign as the antithesis to Christian and Hungarian values. Furthermore, in an effort to target Soros’ business interests, Orbán’s government passed a law mandating NGOs to disclose any foreign-based funding. On April 9, the day following the election, the government announced a bill that would provide the legal framework to ban pro-migrant NGOs.

Orbán’s rhetoric isn’t an anomaly. In recent years, tides of populism around the world have triumphed—from Brexit, to Donald Trump’s victory, to recent elections in the Czech Republic—marking a significant shift in global geopolitical dynamics.

What is noteworthy, however, is Orbán’s steady ideological veer—from a liberal dissident to a far-right autocrat. It is surprising to many that Orbán, who is nowadays seen as a member of Vladimir Putin’s proliferating band of brothers, was once seen as a posterchild for Western-style democracy.

After co-founding the liberal youth group in 1990 that later became Fidesz, the political party, Orbán assumed power in 1998, when he was elected prime minister at the head of a conservative coalition. It wasn’t until he returned to office in 2010, after suffering two consecutive defeats, that Orbán accelerated his illiberal backslide. Not dissimilar to other populist leaders, Orbán rallied his supporters around a promise to reverse the economic downturns of the 2008 global financial crisis.

Fast-forward to 2018: Despite record-high voter turnout and early indicators (such as Fidesz’ stunning defeat in the southern city of Hódmezővásárhely’s election for mayor) that provided hope for change, Orbán was re-elected with a sweeping majority for his third consecutive term as prime minister. Over 50 percent of the country was left feeling dejected as it became clear in the early hours of April 9 that the lack of a unified opposition, coupled with Orbán’s steady consolidation of power over the past eight years, had paved the way for Fidesz’ landslide victory. The fragmented opposition, which consisted of thirty-nine parties, has the next four years to pull together if it wants to stand a chance at defeating Fidesz.

Orbán’s victory is significant for a number of reasons.

For Hungary, it foreshadows four more years of a quasi-authoritarian regime that bears little semblance to the democracy that allowed its accession to the EU and NATO.

For Brussels and Washington, it poses an existential threat. As vanguards for democratic values, neglecting to take adequate measures against Orbán severely erodes both the United States’ and EU’s legitimacy on the global stage.

For global geopolitics, it marks another win for the rising tide of populist movements that recent events show is far from relenting.

And, for Western democracies, it is a rallying cry for action—to protect and defend the democratic values that have bound them together historically and given them one of the greatest periods of peace, freedom, and prosperity.

Vriddhi Sujan is deputy director for board relations and strategic planning at the Atlantic Council.