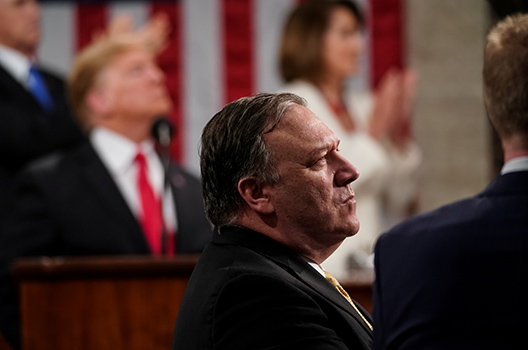 Secretary of State Mike Pompeo during the State of the Union at the Capitol in Washington, DC on February 5, 2019. (Doug Mills/Pool via REUTERS)

US Secretary of State Mike Pompeo’s upcoming trip to Central Europe is “the right call” by the Trump administration, according to Daniel Fried, a distinguished ambassadorial fellow at the Atlantic Council.

After the enlargement of NATO and the European Union to encompass these countries by 2004, “a lot of Americans thought our work in the region was done, and yet it was not so,” Fried explained. With US attention shifting to other regions of the world, the once very close partnerships between the United States and these countries “became eerily normal,” said Damon Wilson, executive vice president of the Atlantic Council. “Central Europe began to be taken for granted as Washington’s attention understandably shifted elsewhere.”

Pompeo’s visits to Budapest, Bratislava, and Warsaw from February 11 to 13 mark one of the first appearances of a senior US official in the region in years. It has been a decade and a half since as US secretary of state has visited Bratislava and seven years since one has visited Budapest. Wilson noted that “it has been twelve years since an American president [visited Budapest],” while “[Russian President Vladimir] Putin visited twice last year.”

The perceived disinterest by Washington toward the region has also been driven by concern about specific internal policies within the region on immigration, media freedom, and the rule of law. Some US analysts, Wilson said, “are arguing for malign neglect” of the region, leading a “policy of shunning and shaming those allies,” who have pursued these policies.

“The United States tended to fall back to a scolding, finger-wagging mode,” Fried explained. But added that “it didn’t do much good.”

But the Trump administration’s new policy of “combined outreach to the governments with careful and, when needed, pointed messages about some of the problems” has already seen some movement, Fried argued.

While Washington certainly can’t take too much credit, in Poland “some of the issues of greatest concern eighteen months ago… have been moving in the right direction,” Fried said, noting a November 2018 letter from the US Ambassador to Poland Georgette Mosbacher to the Polish government criticizing its treatment of journalists.

Engagement, not isolation, is what can provide results on dissuading these countries from slipping away from democratic norms, Wilson and Fried argued. “Freezing people out is not going to help,” Fried said. “The United States has enormous political capital. We need to use it and not walk away and think problems will solve themselves.”

The Trump administration has begun to reverse this policy, Wilson and Fried said, as a response to the growing understanding that, as Wilson said, “the Russians and the Chinese are showing up.” Pompeo’s trip to the region comes as the European Union is still debating the controversial Nord Stream 2 pipeline, which could increase Central European energy dependence on Russia, and considering new provisions to limit the activities of Chinese telecom giant Huawei.

A senior Trump administration official told reporters in a background briefing on February 8 that on his trip Pompeo “will underscore the role in all three of these stops that the US played in supporting that transition and encourage US allies to strengthen their resistance to Russia and China across the board in commerce, energy, security, and rule of law.”

The secretary will “emphasize that the United States intends to compete for positive influence in Central Europe,” the official added.

While some commentators like to point fingers at the region—especially Hungary—for attempting to cozy up to Moscow, Wilson noted that all three countries have joined in the expulsion of Russian diplomats, have not broken the EU’s sanctions regime against Russia, and are continuing to contribute to NATO missions in Afghanistan and Kosovo.

On top of that, Wilson added, Poland remains one of the only allies to meet NATO’s 2 percent of GDP defense-spending targets and Hungary and Slovakia have made firm commitments to reach that goal by 2024. Slovakia recently approved a €1.6 billion purchase of US F-16 fighter jets and Wilson said the United States is working on signing bilateral defense cooperation agreements with both Budapest and Bratislava, following the signing of a Poland-US strategic partnership in 2018. The United States is also working on implementing the Three Seas Initiative with regional partners and the European Union in order to lessen the dependence of the region on Russian energy.

Despite these successes, deeper and more consistent engagement from Washington can avoid any potential desire by the region to get closer to Moscow, Fried and Wilson said. The United States, Fried argued, needs to convince “the Central Europeans—all of them, both sides of the old Iron Curtain line— that the Americans are serious in their Russia policy, serious about their relations with Europe, and present. That tends to work better than both withdrawal and wagging their finger at the same time.”

“It is not too little, to late,” Wilson added, “but we have to be in a mindset of how to keep our allies, our allies.” For too long, Wilson argued, these regional partners have felt as if they were “not backed up” on painful questions such as energy and Chinese economic diplomacy. The growing competition for influence around the globe from China and Russia means the United States cannot take these partners for granted, Wilson said. Washington needs to define “our allies…as part of the free world with us,” Wilson argued, as the United States looks to confront these new challenges to the global order.