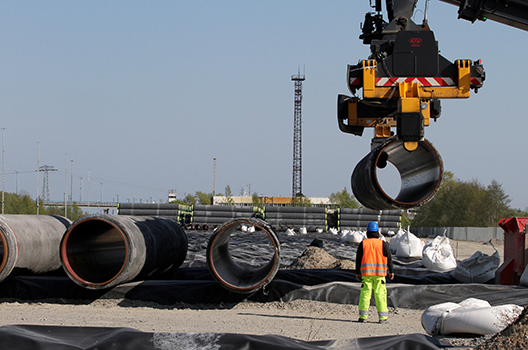 A worker watches as pipes are piled up at a storage area at French pipe coating company EUPEC in Sassnitz May 6, 2011. EUPEC is working to complete around 200,000 pipes for Nord Stream. (REUTERS/Tobias Schwarz)

Opposition to Nord Stream 2—a pipeline that will transport natural gas from Russia to Germany while bypassing Ukraine—is building on both sides of the Atlantic.

On December 11, the US House of Representatives passed a bipartisan resolution expressing opposition to Nord Stream 2. The nonbinding resolution calls on European governments to reject the pipeline and expresses support for US sanctions on entities involved with the project.

Meanwhile, on December 12, the European Parliament passed a resolution that called for Nord Stream 2 to be canceled because it “poses a threat to European energy security.”

Although largely symbolic gestures, these actions signal growing bipartisan opposition in Washington and a hardening of Brussels’ stance toward Nord Stream 2.

The prevailing geopolitical climate and changing energy markets best explain this opposition to Nord Stream 2 in the United States and Europe, as well as the continued support for the project in countries such as Russia, Germany, and Austria. Supporters of the pipeline in Germany argue that it would help meet the country’s energy needs given the government’s decision to phase out nuclear power.

Nord Stream 2, backed by Russian state gas company Gazprom, is planned to become the second strand of the Nord Stream Pipeline network, and double the capacity, from Russia to Germany under the Baltic Sea, bypassing Ukraine as the traditional transit route for Russian gas.

The project is controversial even within Germany, among other EU members states, and in the United States. It is being entertained at a time when the West has implemented sanctions on Russia for its ongoing aggression in Ukraine, annexation of Crimea in 2014, meddling in US elections in 2016, and the attempted assassination of former Russian spy Sergei Skripal in the United Kingdom in March.

Since 2016, the United States launched its liquified natural gas (LNG) exports following the shale revolution, which dramatically boosted North American oil and gas production. As a result, European natural gas importers now have the opportunity to import gas from a wide variety of suppliers other than Russia at a competitive cost.

Meanwhile, US President Donald J. Trump has focused on reducing the trade deficit and boosting US exports, including LNG. The tension over Nord Stream 2 has been framed as one of US-Russian competition for European energy markets.

Trump has called out Germany for its support for the pipeline, accusing Berlin of being “captive” to Russian energy interests. Certainly, the strength of the Russian energy lobby in Germany is undeniable, as is evident from former German Chancellor Gerhard Schroeder’s position within the Nord Stream consortium and as chairman of the board of Russian energy company Rosneft. Schroeder has publicly supported the pipeline and “thwarted attempts to put unified Western pressure on Russia to change its behavior”.

The House resolution highlights Russia’s efforts to dominate the European energy market by controlling “nearly 40 percent of Europe’s gas” and the reliance of eleven countries for 75 percent or more of their annual gas needs from Russia. The resolution pointedly argues that it is in Russia’s geopolitical interest to drive a wedge between countries in Europe and drastically diminish the existing Ukrainian gas transit system.

Rep. Michael Conaway (R-TX), who sponsored the resolution, said: “Russia has continually defied global norms, sovereign borders, and international law. We would be foolish to allow Vladimir Putin a stronger grip on our European allies and the global energy market.”

The House resolution (“Expressing opposition to the completion of Nord Stream II, and for other purposes, as amended) makes four major points. First, it confirms that “Nord Stream II is a drastic step backwards for European energy security and United States interests.”

Second, it “calls upon European governments to reject the Nord Stream II project.”

Third, it urges Trump “to use all available tools to support European energy security and diversification away from reliance on Russian gas.”

Finally, it expresses “support of the imposition of sanctions on Nord Stream 2 via the Countering America’s Adversaries Through Sanctions Act” (CAATSA), a law signed by Trump in 2017 that enables sanctions on Iran, Russia, and North Korea. In this event, European companies participating in Nord Stream would be subject to secondary sanctions.

The resolution passed by the European Parliament called for cancelling Nord Stream 2 in light of the recent Russian aggression toward Ukraine in the Kerch Strait on November 25.

For some Nord Stream 2 critics, the new resolutions from the US House of Representatives and the EU Parliament will be insufficient. However, these two resolutions signal a turnaround in Washington and in Brussels, where until this year there was little discussion of Nord Stream 2 or it was being sold as a “done deal.”

Already, a group of former US government officials and leading foreign policy experts (including myself) have signed an Open Letter to President Trump calling for sanctions on Nord Stream 2 among other forms of increasing pressure on Moscow.

At the same time, these resolutions do not address the conflict that may arise if the United States were to sanction European energy companies, and therefore their allies, should they fail to withdraw from Nord Stream 2. The complicated path that lies ahead for policymakers who oppose the project, on both sides of the Atlantic, is how to reduce the incentives for companies to continue working on the pipeline, while holding a united front against the Kremlin’s attempts to dominate Europe’s energy market.

Agnia Grigas is a nonresident senior fellow at the Atlantic Council’s Eurasia Center. She is the author of Beyond Crimea: The New Russian Empire and The New Geopolitics of Natural Gas. Follow her @AgniaGrigas and Grigas.net.