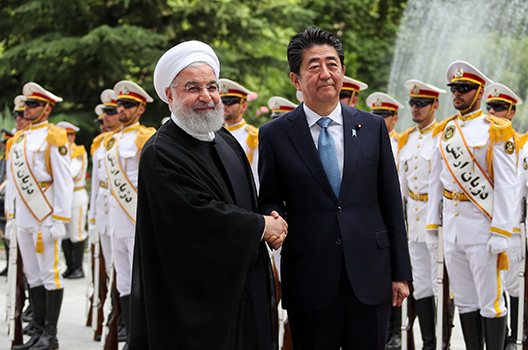 Iran is unlikely to agree to negotiations with the United States in the absence of US concessions, according to Barbara Slavin, director of the Atlantic Council’s Future of Iran Initiative.

“I do not see Trump as worthy of any message exchange, and I do not have any reply for him, now or in future,” Iranian state media quoted Khamenei as telling Abe on June 13.

“What Khamenei is saying to President Trump,” Slavin explained, is that “‘you say you want negotiations but you have made no concessions and no offer of concessions and we will not respond to pressure.’” It is unlikely that Tehran would want to start negotiations, she said, unless there is “some sort of gesture from the United States. Otherwise it would be too huge a loss of face at this point to agree to talk to Trump.”

Slavin was not surprised by Khamenei’s rejection. “I think it is pretty clear that we are still in an escalatory cycle between the United States and Iran, both in terms of rhetoric and in terms of action,” she said.

Abe’s trip to Tehran follows an official state visit by US President Donald J. Trump to Japan from May 25-28 during which the prime minister suggested serving as a mediator between the United States and Iran. “I know that the prime minister and Japan have a very good relationship with Iran, so we’ll see what happens,” Trump said on May 27.

Borzou Daragahi, a nonresident senior fellow in the Atlantic Council’s Scowcroft Center for Strategy and Security’s Middle East Security Initiative, said Trump “would love a photo op with [Iranian President Hassan] Rouhani.” But “the complicated nature of the Iranian system… makes such a meeting extremely difficult and makes any kind of agreement with someone who has said the kinds of things [Trump] has said and behaved the way that he has behaved very, very tough to do,” he explained.

US-Iran tensions have escalated since the Trump administration’s withdrawal from the 2015 Iran nuclear deal—the Joint Comprehensive Plan of Action (JCPOA)—on May 8, 2018. US officials have consistently accused Iran of supporting terrorism in the Middle East and taking aggressive actions against US allies in the Persian Gulf.

Abe’s visit to Iran was overshadowed by attacks on two oil tankers in the Strait of Hormuz. One of the tankers was Japanese. Iranian Foreign Minister Javad Zarif, noting that the attack took place as Abe was meeting Khamenei, tweeted: “Suspicious doesn’t begin to describe what likely transpired this morning.”

While no one has claimed responsibility, the United States has blamed Iran for the attacks on June 12 and the attack on four oil tankers off the Emirati port of Fujairah in May. US Secretary of State Mike Pompeo tweeted that “it is the assessment of the US government that Iran is responsible for today’s attacks in the Gulf of Oman. These attacks are a threat to international peace and security, a blatant assault on the freedom of navigation, and an unacceptable escalation of tension by Iran.”

If Tehran is responsible, Slavin said the attack should be seen as “part of a calculated escalation that involves damage to oil from other countries—particularly Iranian adversaries—to show that there is a price to be paid for putting an oil embargo on Iran.”

The United States announced on April 22 that it would not be granting any more waivers to countries that import Iranian oil, effectively trying to reduce Iranian oil exports to zero.

Daragahi suggested that the explosions in the Strait of Hormuz could be the work of “freelancers” rather than coordinated government action. While these actors would not embarrass Tehran during Abe’s visit, they could “take on an operation—somewhat unauthorized—in order to do the right thing,” as they see it, he said.

Both Daragahi and Slavin doubted, however, that any evidence of Iranian involvement in the attack would spark a significant response from Washington. “President Trump has made it clear that he doesn’t want another war in the Middle East that involves a large deployment of US troops,” Slavin said, pointing out that after similar damage to four tankers on May 12, Trump’s response was to send 900 more troops to the region.

Daragahi noted that the US president had tweeted multiple times in the morning of June 13, but had not said anything on the incident. “It is definitely not his instinct to be focused on this kind of thing,” Daragahi said, especially given Trump’s reluctance to embroil the United States in a wider conflict in the region.

But attacks on tankers is exactly what the international community wants to avoid, Daragahi added. “No one wants to see the disruption of energy markets with the economy being as fragile as it is at this point… [A]nother shock to the system in the form of very high oil prices would really be damaging political and economically for everyone.”

Oil prices surged after the attacks on June 13.

Japan was one of eight countries that had received special exemptions from the United States allowing it to buy oil from Iran. When those exemptions ended, Japan stopped importing oil from Iran.

“Even if Japan is not buying Iranian oil at this point, it relies on oil primarily from the Persian Gulf and the last thing the Japanese want to see is real hostilities in the region that would jeopardize its supply of oil and would jack up the price of oil,” Slavin said. “Any type of repeat of the tanker wars of the 1980s during the Iran-Iraq War would be particularly damaging for Japan and other Asian countries that import oil from the Persian Gulf.”

Slavin warned that the growing number of incidents in the Persian Gulf could be a sign of things to come. After the United States withdrew from the JCPOA in 2018, “Trump has paid no price… and the international community has paid no price,” Slavin said. “Those days are clearly over.”