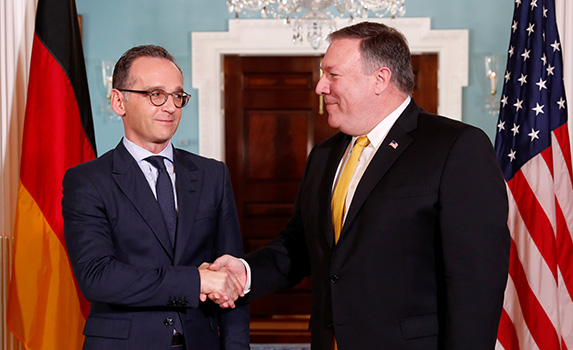 US President Donald J. Trump’s October 20 announcement that the United States would withdraw from the Intermediate-Range Nuclear Forces (INF) Treaty as a result of Russian cheating set off a wide variety of anxious messages from allies as well as some gratuitous threats from Russian President Vladimir Putin.

The European Union (EU) said in response: “The United States and the Russian Federation need to remain engaged in constructive dialogue to preserve the INF Treaty and ensure its full and verifiable implementation which is crucial for Europe’s and global security. … While we expect the Russian Federation to address serious concerns regarding its compliance with the INF Treaty in a substantial and transparent way, we also expect the United States to consider the consequences of its possible withdrawal from the INF on its own security, on the security of its allies and of the whole world. … The world doesn’t need a new arms race that would benefit no one and on the contrary would bring even more instability.”

Germany’s foreign minister, Heiko Maas, calling the US decision “regrettable,” stated that the INF Treaty was “an important pillar of our European security architecture” and that the US move to withdraw “raises difficult questions for us and Europe.”

Germany, Maas said, would be urging Washington to “consider the possible consequences” of its decision.  (In fairness, he also did note that Germany has repeatedly urged Moscow to “clear up the serious allegations of breaching the INF Treaty, which Russia has so far not done.”)

For his part, Putin stated that any European countries hosting US missiles would be at risk of retaliatory Russian strikes. Russia’s response would be “very quick and effective,” he threatened. “If the United States does end up pulling out of the INF Treaty, then the most important question is what will they do with the missiles that will reappear again? … If they are supplied to Europe, then of course we will have to respond in kind, and the European countries that agree to this—if things come to this—should understand that they will be subjecting their own territory to the threat of a possible retaliatory strike,” he said.

All of this was predictable. And it encapsulates what’s wrong with the whole INF—and indeed nuclear weapons—debate in Europe.

Calls for the United States to continue to engage in a constructive dialogue with Russia on this issue bring to mind Albert Einstein’s definition of insanity: “doing the same thing over and over again, but expecting different results.”

The United States has been raising Russian violations of the INF Treaty with Moscow since 2014. During that period, Russia completed design of the treaty-busting SSC8 cruise missile, and moved to produce, test, and deploy the system. Multiple SSC8 battalions are in the field and are operational—equipped with nuclear weapons. Continued entreaties to the Kremlin “to make Europe safer” will result only in additional Russian deployments, while Moscow continues to reject any idea that it has violated, let alone eviscerated, the treaty.

The Kremlin’s behavior mirrors almost exactly the situation of the late 1970s and early 1980s when NATO appealed to the USSR to halt deployments of the Soviet SS-20 IRBM only to have Moscow ramp up placing SS-20s in the field. The halt in SS-20 deployments and their eventual elimination thanks to the INF Treaty only occurred as a direct result of NATO’s counter-deployment of Pershing II and ground-launched cruise missiles.

How can the INF Treaty be considered “an important pillar of our European security architecture” when Russia is exploiting it to place illegal systems in the field while NATO continues to believe itself bound by the treaty’s strictures?

To believe the INF Treaty remains in force is risible: Russia’s continued deployment of SSC8s has rendered it null and void. It only remains for the West to acknowledge this, which the Trump administration has now done.

But Russia’s violation of the INF Treaty is only one element of Russia’s growing nuclear threat to NATO Europe, a threat which was supposed to be reduced dramatically by the Presidential Nuclear Initiatives agreed to in 1991 by US President George H.W. Bush and Soviet President Mikhail Gorbachev, and in 1992 by Bush and Russian President Boris Yeltsin. Under those initiatives, which were politically (although not legally) binding, NATO and the USSR/Russia pledged to slash their arsenals of short-range nuclear weapons.  The United States/NATO cut its arsenal by 90 percent; Russia did not. Of particular importance, both sides agreed to eliminate all of their ground-launched short-range nuclear weapons.  The United States accomplished this goal promptly: existing nuclear artillery shells and short-range missile warheads were withdrawn to the United States and destroyed, while new programs were halted.

Although the Russian government claims it has adhered to the Presidential Nuclear Initiatives, it has become evident that the Russian army still retains nuclear artillery weapons and has deployed for many years a relatively new short-range ballistic missile, the SS-26, which has nuclear capability. As a result, Russia’s deployed stockpile of short-range nuclear weapons is now ten times larger than NATO’s.

Ironically, this calls to mind the classic title of a Cold War-era Soviet propaganda document: “Whence the Threat to Peace?”

Russian cheating on its nuclear arms control commitments must be confronted, especially by those who are threatened by the Russian weapons. There is no excuse for the European members of NATO to seek “moral equivalence” by casting aspersions on both the United States and Russia for increasing the nuclear threat to NATO; Russia alone bears that burden. Our allies might take to heart the message President John F. Kennedy sent to British philosopher Bertrand Russell when the latter accused the United States of creating a crisis over Nikita Khrushchev’s deployment of nuclear missiles in Cuba: “I think your attention might well be directed to the burglars rather than to those who caught the burglars.”

Russia’s malevolent behavior toward NATO over the past ten years has been well-documented. Putin and his senior officials have long indulged in inflammatory rhetoric unheard since the era of Khrushchev, statements in which Russia threatens to conduct nuclear strikes against (or to put on Russia’s nuclear target list) Poland, the Czech Republic, and Denmark; Russian generals have identified the United States and NATO “as our primary enemy.” Russian bombers and fighters routinely penetrate allied air defense zones and Russian aircraft and naval ships routinely maneuver in an extremely unsafe manner in close proximity to NATO assets. Russian military exercises showcase assaults against NATO, to include nuclear strikes. All of this is intended to intimidate and blackmail NATO governments and publics.

Putin’s latest intimation that he would add NATO countries to his target list belies the reality that Russian nuclear forces have been targeting NATO for decades. The existing short-range forces do so today, as do Russian naval and air tactical nuclear systems. The growing number of newly deployed SSC8s do so as well.

Further, to suggest that should NATO decide to respond to the SSC8 deployments, Russia would have to deploy a countervailing capability is to reach a new level of hypocrisy, even for Putin.

What, then, should NATO nations (and even the non-NATO members of the EU) be doing about all of this?

First, they should recognize that two US administrations have been negotiating with Moscow about the SSC8’s violation of the INF Treaty with the only tangible result being the system’s operational deployment. The blame for the INF Treaty’s demise rests squarely and solely with the Kremlin.

Second, they should remember that the United States’ extension of its nuclear umbrella over NATO—thereby putting the US homeland directly at risk—is a selfless act designed to protect our allies from Russian coercion, blackmail, or attack. A quick look at the situation in Abkhazia, South Ossetia, the Crimea, the Donbass, and Transnistria provides evidence of what happens when Russia confronts weaker nations that lack protection.

Third, working with the United States, the rest of NATO should agree upon a counter to the SSC8 which may not need to be nuclear-capable, and which almost certainly would not be based in Europe. The history of the past many decades makes clear that the Kremlin, whether the ruler is Soviet, post-Soviet or the current mixture of the two, will only agree to negotiate and abide by arms control/reduction agreements if there is a Western system whose deployment Moscow seeks to block or constrain.

Finally, the United States and NATO should be ever mindful of Russian threats and activities which have occurred for over a decade and which continue today. Russia has not been a good neighbor. Europeans’ concern and ire should be directed at the former KGB official who now directs all aspects of Moscow’s malign behavior toward the West, rather than at the United States.

Franklin C. Miller is a board director at the Atlantic Council and a principal of The Scowcroft Group. He is a former senior Defense Department and White House official.  In his thirty-one-year career he was a leading force in shaping US deterrence and arms control policy in the Ronald Reagan, George H.W. Bush, Bill Clinton, and George W. Bush administrations. He was deeply involved in NATO nuclear policy issues throughout his career and chaired the NATO High Level Group from 1996-2001.