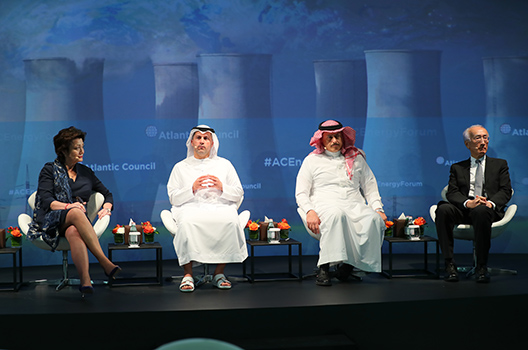 Nuclear power evokes a broad spectrum of responses around the world. While the United Arab Emirates is building a nuclear power plant and Saudi Arabia has announced its intention to do so, in Japan—where the memories of the Fukushima plant disaster of 2011 are still fresh—there is a reluctance to embrace nuclear power, while Germany is implementing a plan to take all of its nuclear reactors offline by 2022.

In 2007-2008, the United Arab Emirates did a comprehensive assessment of its energy options with the goal of building a diversified portfolio, Al Hammadi said at the Atlantic Council’s 2019 Global Energy Forum in Abu Dhabi on January 12. “Nuclear is proven to be a very secure, safe, and reliable source of energy,” he said. “If you look at CO2 emissions, nuclear is one of the best sources to avoid CO2 emissions.”

Earlier this week, the United Arab Emirates’ Minister of Energy and Security Suhail Al Mazrouei said the Barakah nuclear power plant project had been delayed. “Nuclear is coming (but) there will be a bit of a delay,” he said without providing a timeline.

The Trump administration, meanwhile, has been involved in talks with Saudi Arabia aimed at striking a so-called 123 Agreement that would allow US companies to build nuclear power plants in Saudi Arabia.

Discussing Saudi Arabia’s vision for nuclear energy, Al Odan said: “When a nation decides to get into nuclear it has the strategic objective to diversify the energy supply and energy security. Diversification of energy is very critical for any nation and each nation has to look at its own characteristics.”

“Getting into nuclear is not just a matter to supply power,” said Al Odan, “actually it is a way to diversify the economy as well, creating jobs, creating industry.”

Al Hammadi and Al Odan participated in a panel discussion on “Nuclear Energy: New Actors, New Technologies, and New Geopolitics.” They were joined in the discussion by Sasakawa Peace Foundation  Chairman Nobuo Tanaka and Ellen Tauscher, a former US under secretary of state for arms control and international security affairs. David Scott, founder and president of the Investment Diplomacy Group, moderated the discussion.

Tanaka said that nuclear energy is a challenging question for Japanese in light its history, both recent and not so recent. After the Fukushima disaster, Japan idled all of its nuclear power plants. Only now are some of them beginning to come back online. In Japan, “regaining public confidence [in nuclear energy] is really tough,” he said, adding: “Still more than half of the population if you ask ‘do you support the restarting of the power plants?’, they say no.”

“To make these people convinced certainly we need to show that the safety is guaranteed by the technological advances and strict rules, regulations, and changed behaviors,” said Tanaka.

Tauscher acknowledged that talking about nuclear power is “not for the faint of heart” in politics. “You have to deal with the fact that you have to have a big educational push,” she said. “But, in the end, governments have got to lead.”

“Of course there is risk, but it’s manageable risk,” said Tauscher. “I think the benefits are significant, but we need to have a political debate where the facts are presented, people can assess them, and give people something to be for. There is a way to do that. We haven’t found it yet.”

The panelists also discussed the questions of cost, the importance of new technologies related to nuclear energy, and the storage challenges when it comes to renewables.

As for the future of nuclear energy, all the panelists appeared to be in agreement that nuclear energy is not going anywhere anytime soon.

While Tanaka said that for a sustainable future nuclear power should be 25 percent of the energy mix, Al Hammadi said its future will depend on how serious the world is about addressing the challenge of global warming.