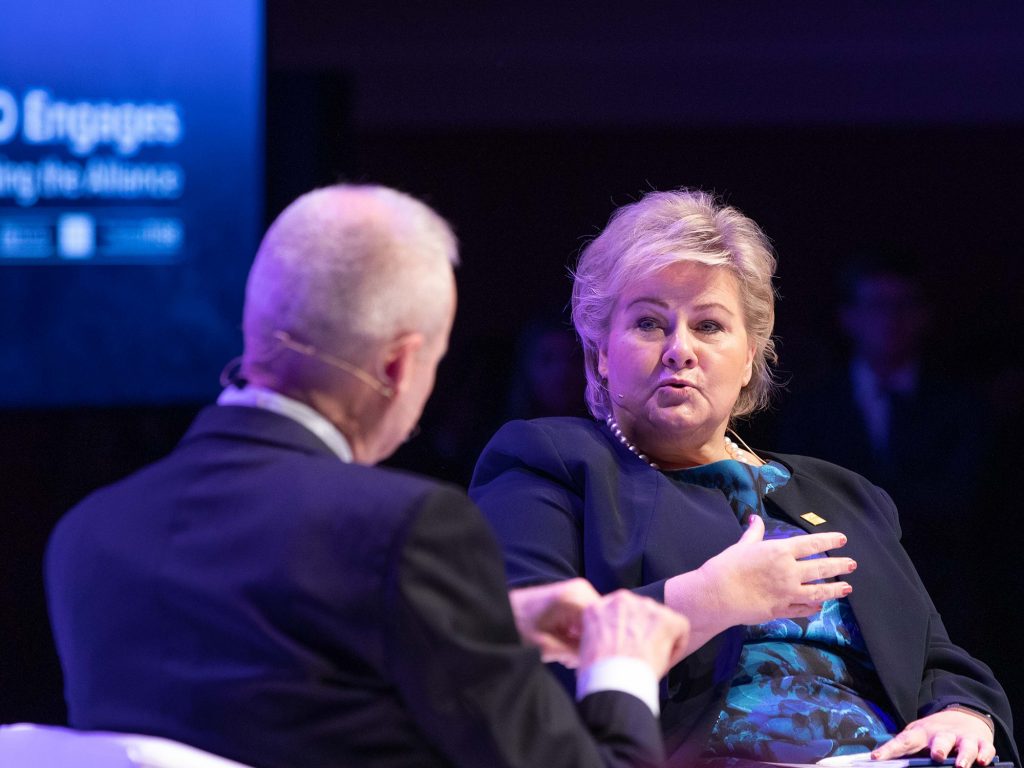 As the world confronts the growing threat of climate change, Norwegian Prime Minister Erna Solberg argued that NATO has an important role to play. Speaking at the NATO Engages event in London on December 3, co-hosted by the Atlantic Council, Solberg said that the Alliance needs to “give rise to a little bit more discussion on how important it is to stop [climate] change.”

Solberg admitted that she doesn’t think “we will solve this by our defense part of NATO,” but stressed that NATO leaders can help spur greater action. “What we really have to do,” she said, “is [to] stop climate change [and] make sure that we invest now instead of having to invest a lot in the future to work on the damages. It is much less costly to prevent climate change than it will be to adapt to it – on all levels of our society.” NATO can help spark global action by making the connection between climate change and NATO’s traditional realm: security. “I think NATO’s role is to make sure that they analyze the root causes for changes in security in different areas,” due to climate change, Solberg argued.

Solberg explained that “climate change makes people move, and…it creates new security threats in areas,” such as water scarcity. She cited a lack of water as fueling extremism in Mali and Burkina Faso and noted that this was also a problem for the Middle East in general, with specific focus on Iraq: “The whole Middle East has a water problem for the future,” she explained, “and it will lead to more conflicts in these areas.” Climate change has eradicated approximately 80 percent of the African Sahel’s farmland, intensely affecting nations like Mali and Burkina Faso.

Furthermore, rising temperatures have increased droughts and floods and have limited rainfall, creating a massive food insecurity crisis in the region. The rapid reduction in arable land has brought farmers and herders into conflict, contributing to a contagious atmosphere of violence that has seen a large uptick in violent deaths, civilian attacks, and jihadist activity in Mali and Burkina Faso, in addition to other Sahelian countries. For Iraq’s part, poor bureaucratic management, along with climate change, have led to dangerous water insecurity, with the problem concentrated in Basra.

Solberg also described the threat closer to home for Europe, such as the potential effects of climate change on the Arctic. Despite a query from the audience about a future “struggle” in that region, Solberg expressed faith in the stability of the situation and her belief that the sea routes opening in the Arctic did not present a serious security threat to Norway. She did, however, say that climate change has created an issue of general public safety in the area following increases in economic activity and tourism, as authorities have to take extra care in “making sure that you can search and rescue people who are there.”

Solberg also stressed that the “big emitters” of the world will be crucial in developing a global response to climate change. She was adamant that no solution would be effective until the likes of China and the United States were “onboard” and were setting “stronger national targets [every] year.” She expressed hope that the United States would be “getting back into the climate discussions again” following its withdrawal from the Paris Climate Agreement and demonstrated some faith in China, explaining that they are “thinking seriously about [climate change]…because of the air pollution in their own cities.”

While Solberg admitted that there is currently a “problem between the shortsightedness in politics” and the need for long-term solutions for the climate change threat, she was optimistic about potential action because she “sincerely believe[s] that there is a big responsibility that most national leaders feel today.” With every nation and organization needed to do their part to confront this challenge, NATO’s role in combating global climate change and mitigating its effects will only become more important.

Om Arvind is an editorial assistant with the Atlantic Council.