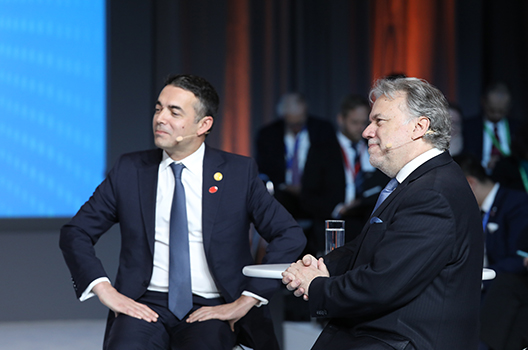 As NATO marks its seventieth year, it is also looking forward to welcoming its thirtieth member: the Republic of North Macedonia.

The agreement between Greece and the newly-named Republic of North Macedonia, which ended a twenty-seven-year dispute between the two countries, “sends a clear message that we can resolve disputes through dialogue, by good faith… and using history not as a prison but as a school,” Greek Foreign Minister Giorgos Katrougalos said on April 3. He said that the success of the two Western Balkans neighbors’ reconciliation can be a “blueprint for the Balkans — the powder keg of Europe in the past — to help resolve the other very difficult disputes that still exist” in the region and around the world.

“This is unfinished business,” Nikola Dimitrov, the foreign minister of North Macedonia, said in a session with Katrougalos at the NATO Engages conference jointly hosted by the Atlantic Council, the German Marshall Fund of the United States, and the Munich Security Conference in Washington. But Dimitrov  trusted that his country’s membership would be formalized by the end of the year.

Dimitrov argued that North Macedonia will be a boon to the Alliance, despite its small size. “Strength is about how strong your military is, how strong your economy is, but also how many friends you have, how close those friends are, and how willing are those friends to engage when you need them,” he said. He pointed out that his country had supported NATO operations in the Balkans as early as 1995 and that as a non-member partner was at one time the fourth-largest per capita contributor to the mission in Afghanistan. North Macedonia had surpassed the 2 percent target on defense spending in 2008, but has since dropped below that goal. Dimitrov promised his government would work fast to return to that level.

Dimitrov said that his country’s membership would also “extend the zone of stability in a region that still needs more stability” and “will have a calming influence in the neighborhood.” Perhaps more importantly, he argued that his country’s experience outside of the Alliance will invoke new energy among member states. “Being there for so many years,” he said, “you forget how cold it is on the outside.”

The agreement between North Macedonia and Greece remains controversial and could be a huge factor in the upcoming European and parliamentary elections in Greece. On April 2, Tsipras became the first Greek prime minister to visit North Macedonia since that country’s independence in 1991. Katrougalos concede that “a lot of Greeks had an emotional reaction to the agreement,” but he hopes that Tsipras and his government allies “are going to persuade them.” For Katrougalos, “the agreement is a win-win, not a zero-sum game” as North Macedonia gains NATO membership while Athens gets to have an expanded regional role, “not just to be a stable democracy, but to export stability as well.”

Dimitrov praised both Zaev and Tsipras for thinking “more about the next generation and less about the next election.” With the new agreement, he said, “we are in the same boat” and that both countries “would like to have a great neighbor.”