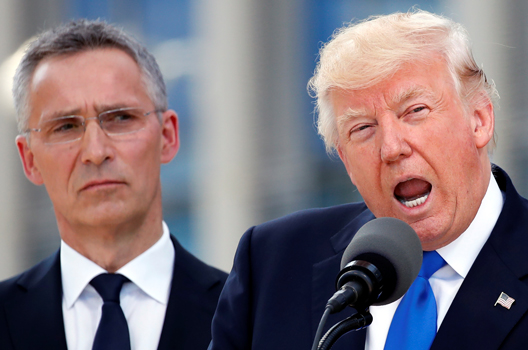 US President Donald Trump (R) speaks beside NATO Secretary General Jens Stoltenberg at the start of the NATO summit at their new headquarters in Brussels, Belgium, May 25, 2017. (REUTERS/Christian Hartmann)

In a few days, US President Donald J. Trump will meet with his fellow heads of state and government from across the NATO alliance in Brussels, Belgium, and there is widespread concern that it will once again be a meeting where the United States is scornful of its allies and partners. Some even fear that this may be the beginning of the end of NATO and the bond between the United States and Europe. The flames have been fanned further by the recent G-7 meeting which ended in acrimony between the US president and the other leaders, the announced Trump-Putin summit in Helsinki a few days after the NATO summit, and whispers that the United States may pull its troops out of Germany in the coming years.

Trump has, going back to when he was a Republican primary candidate, criticized NATO’s members for not doing their fair share in terms of spending on defense, and stated that the Europeans get more out of NATO than the United States does.  The president does indeed have a point when it comes to European defense spending, which has been in decline since the early 1990s, although it is again on the rise since 2014. And the uptick in European defense spending is something that the president could arguably take partial credit for, if he wished.

But NATO is not about the United States doing Europe favors. It is an alliance created by the United States, and which has proven remarkably effective in transforming to, in great part, advancing American national security objectives. During the Cold War NATO stood as the bulwark against the Soviet Union in Europe during the multi-decade struggle between communism and the free world led by the United States. After the Cold War, NATO helped advance the vision set out by US President George H.W. Bush of a Europe whole, free, and at peace by inviting newly free countries of Eastern Europe to join the Alliance. And after the 9/11 attacks in the United States, NATO transformed again to take on the tough mission in Afghanistan alongside the United States. Well over a thousand non-US NATO soldiers lost their lives in that campaign. As a proportion of deployed forces, four NATO nations—Canada, the United Kingdom, Estonia, and Denmark—sustained higher casualty rates in Afghanistan than the United States did.

NATO is also useful to the United States, even when the Alliance itself is not centrally involved in an operation. The US-led campaign against the Islamic State of Iraq and al-Sham (ISIS) includes contributions from a range of NATO allies. Over a third of the air strikes against ISIS in Iraq and Libya have been flown by NATO partner countries, something that is made possible by the habits of cooperation established and practiced inside NATO.

The United States’ European allies certainly do need to spend more on defense, and the president should push them to do it. But that is not to say that NATO is a burden for the United States. It has proven itself key to American national security objectives since the late 1940s. It is, after all, the United States’ alliance.

Magnus Nordenman is director of the Transatlantic Security Initiative at the Atlantic Council’s Scowcroft Center for Strategy and Security. Follow him on Twitter @MNordenman.