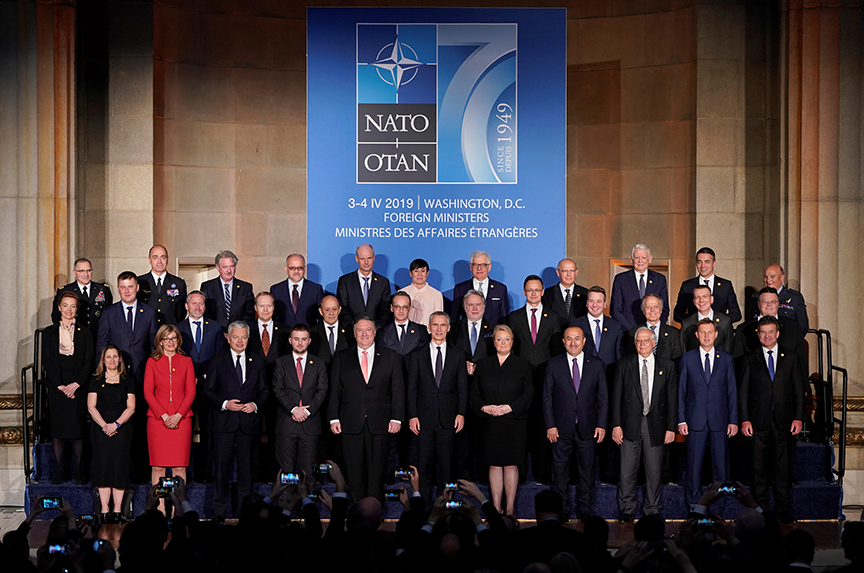 NATO foreign ministers posed for a family photo at a reception to celebrate NATO's 70th anniver-sary in Washington on April 3, 2019. (Reuters/Joshua Roberts)

As NATO leaders marked the seventieth anniversary of the Alliance in Washington on April 4, they highlighted its success in keeping the peace in Europe and protecting member countries. But NATO’s importance today goes beyond its borders as it continues to flexibly work with partner countries around the world to improve stability and security globally.

Since its founding in 1949, NATO has grown from its twelve founding members to twenty-nine allies across North America and Europe. Outside of these allies, NATO has partnership agreements with more than forty countries. These include neighbors like Sweden, Finland, Austria, Switzerland, and Ukraine, as well as countries located further away, such as Australia, Japan, South Korea, Iraq, and Colombia. NATO partnerships enable cooperation through joint trainings and exercises, capability development, and political consultations, which enhance security and stability in NATO’s neighborhood and help prevent conflict and defend the Alliance’s core values.

NATO’s joint exercises, for example, are an opportunity for members and partners to learn from each other and exchange lessons learned and best practices. Last year, in NATO’s largest exercise in recent years, Trident Juncture 18, 50,000 participants from NATO and partner countries practiced operating together in Norway’s harsh weather and varying landscapes. NATO partner Sweden participated with 2,200 personnel from the Swedish Armed Forces, and viewed the exercise as an opportunity to enhance national capabilities and strengthen cooperation with Finland, Norway, the United States, and NATO. In a joint article published after Trident Juncture, defense and foreign ministers from the Nordic NATO members—Norway, Denmark, and Iceland—and Nordic NATO partners, Sweden and Finland, described how joint NATO exercises strengthen their bond and improve their ability to operate together as neighbors.

Capability development is another important part of NATO’s broader efforts. Through the Defense and Related Security Capacity Building Initiative, NATO assists partner countries in strengthening their own defense institutions and capacities. By helping partner countries improve their own capabilities, through advice, trainings, and mentoring, NATO can contribute to security and stability on a longer term, and without deploying combat forces.

Going hand in hand with NATO’s open-door policy, these partnerships are evidence of NATO’s willingness to collaborate outside of the Alliance and its open approach to finding common ground with non-NATO members to work together for peace and democratic values. While some of NATO’s partner countries have expressed an interest in joining the Alliance in the future, the partnerships can work as an alternative route for countries wishing to stay non-aligned or that may not be eligible for membership to cooperate with the Alliance.

While NATO’s partnership policies set out the strategic objectives for cooperation, such as promoting regional security, enhancing support for NATO operations, and strengthening international security, peace, and stability, each partner has a separate agreement setting out specific goals and focus.

Ukraine has, for example, received both political support and practical assistance from the Alliance in response to the Russia-Ukraine conflict. In 2016, NATO included support measures as part of Ukraine’s Comprehensive Assistance Package (CAP). Through CAP, Ukraine receives financial support to make reforms and better provide for its own security and defense. NATO’s close partner Georgia has also received large support from the Alliance. Through the Substantial NATO-Georgia Package (SNGP), NATO helps Georgia strengthen its defense capabilities and develop close cooperation and interoperability with NATO allies. As part of the SNGP, experts from NATO member and partner states provide advice to Georgia on several areas including air defense, maritime security, military police, and intelligence-sharing.

Besides benefitting partner countries by improving their defense and helping them provide for their own security, NATO’s partnerships act as a strengthening factor for the Alliance. As highlighted in the NATO Secretary General’s annual report released earlier this year, NATO partners took part in seventeen NATO-led exercises and contributed 107 personnel to the NATO Command Structure during 2018. NATO partners have also been valuable supporters of the Alliance in its operations in Afghanistan and Kosovo, and play an important role in NATO’s continuing fight against terrorism.

Australia, for example, has been an important contributor to NATO efforts in Afghanistan. From 2010 to 2018, Australia provided a total of $440 million in financial support to Afghanistan’s security forces and institutions through NATO’s Afghan National Army Trust Fund, making the country one of the most generous contributors. Australia is also involved in the NATO Science for Peace and Security Programme, cooperating with the Alliance on issues related to women, peace, and security; advanced technologies; counter terrorism; and energy security.

Even partners receiving support from the Alliance make contributions to NATO efforts. In fact, most partnerships are mutually beneficial for the Alliance and the partner countries. Georgia has, for example, provided much support to NATO operations in Afghanistan and contributed with one of the largest non-NATO deployments to the International Security Assistance Force. Ukraine has supported NATO peace operations in both Bosnia and Herzegovina and Kosovo, and is currently providing an engineering unit with counter-improvised explosive devices capabilities to the Kosovo Force.

Finland is another partner country benefitting from, and contributing to, NATO’s efforts. With its long-standing relationship with the Alliance, and important contributions to NATO operations in Afghanistan and the Balkans, Finland has been one of NATO’s most active partners. Finland is also, like Sweden, Australia, Georgia, and Jordan, one of NATO’s Enhanced Opportunity Partners, meaning increased opportunities for dialogue and cooperation with NATO allies. Due to Finland’s geography, and increased concerns about Russian activities in recent years, NATO’s cooperation with Finland currently includes a focus on maintaining security in the Baltic Sea through both dialogue and practical cooperation.

While Finland may not be ready for full NATO membership, a close partnership with the Alliance has, in many ways, proven itself successful. It has benefitted Finland in both the development and use of military capabilities and in defense policy, and made it possible for the country to participate in NATO exercises and trainings. According to Lauratuulia Lehtinen, deputy head of the Finnish Mission to NATO, the Alliance is fundamentally important to European security and has improved security and stability in Finland’s neighborhood.

With new challenges and a changing security environment, international cooperation through friends and allies is now more important than ever. NATO and its extensive partner network have played a key role in maintaining global stability and security, and looking back at the past seventy years we see the Alliance’s and partners’ success in doing just that. The Alliance and its partners need each other to face the global security challenges of today. So, as we celebrate this milestone in transatlantic cooperation, let’s not forget about the broader importance of NATO because NATO’s importance today goes beyond its own territory.

Marlene Wiklund is a junior fellow in the Atlantic Council’s Scowcroft Center for Strategy and Security’s Transatlantic Security Initiative.