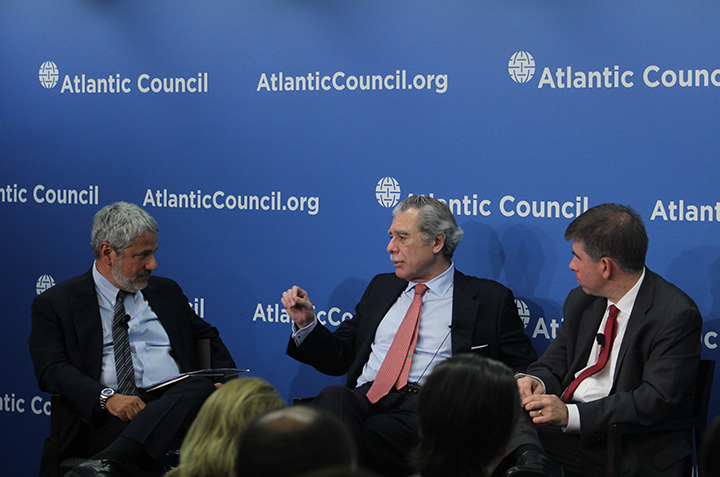 It would be a disaster to cut trade relations with Mexico, three former US officials said at the Atlantic Council on June 27.

In a speech at a rally on June 28, Trump promised to “get a better deal for [US] workers.” Barring that, he claimed that he would push for a US departure from NAFTA.

“NAFTA is worth about one trillion dollars and companies have been setting up supply chains in these three countries for the past twenty years. We need to preserve this embedded infrastructure,” said Carlos Gutierrez, who served as US secretary of commerce in the George W. Bush administration.

“For a government official to say that NAFTA is bad and it’s a part of my campaign…think about what you would do to thousands and thousands of US corporations who all of a sudden would be turned upside down,” he added.

Trade and immigration have taken center stage on the US presidential campaign trail. Trump has called for the construction of a wall along the US-Mexico border, referred to Mexican immigrants criminals and rapists, and claimed that the governor of New Mexico, Susana Martinez, was “not doing her job.”

Meanwhile, Hillary Rodham Clinton, the Democratic Party’s presumptive presidential nominee, has backtracked support for US President Barack Obama’s chief trade agreement, the Trans-Pacific Partnership (TPP), of which Mexico is a signatory member. Congress has yet to ratify the TPP.

Bill Clinton’s administration spearheaded negotiations on NAFTA, which was implemented in 1994.

Trump has claimed that NAFTA “has emptied our states of manufacturing and our jobs.”

“Today, it is a much more complex but cooperative relationship…and through NAFTA we have reached a high and comfortable level of cooperation between the two countries,” said Negroponte.

On June 29, Obama, Mexican President Enrique Peña Nieto, and Canadian Prime Minister Justin Trudeau will meet in Ottawa at the annual North American Leaders Summit. Economic stability and trade are expected at the top of the meeting’s agenda.

Illegal immigration and political instability in Central and South America have defined the United States’ diplomatic sentiment toward the region at-large.

Illegal Mexican immigrant populations in the United States have declined since their 2007 peak of 6.9 million.

“More and more people that are coming from Latin America are fleeing violence and failed states. If we don’t address the problem at its source and to help the rule of law gain a footing in Central and South America, people are going to continue to flee because their lives are at risk,” said Chertoff.

“The idea that most illegal migrants in the US are Mexicans is complete hogwash. A very significant number come from Latin and Central America…even though they may come through Mexico,” he added.

Venezuela, to Mexico’s south, has been plunged into economic crisis amid political instability and volatile oil prices. The nation is gripped by food shortages and riots have regularly erupted over the past few weeks.

To the west, however, Colombia signed a historic bilateral ceasefire agreement with the leftist Revolutionary Armed Forces of Colombia (FARC) rebel group on June 23. Across the region, efforts to combat drug production and trafficking still define the overall security situation. In January, drug cartel kingpin Joaquín Guzmán, better known as “El Chapo,” was recaptured by Mexican authorities following his prison escape in July of 2015. “El Chapo” is widely believed to be involved in one of the most profitable cartels in the region.

Chertoff noted that transnational criminal activity has been a high point of collaboration between the United States and Mexico.

“The issue with these criminal gangs is a problem for both countries. Even though [the United States] creates the market for these groups to operate, I do think we are making progress in cooperating [with Mexico] on the issue,” said Chertoff.

Regional conflicts have catalyzed flows of illegal immigration northward, but immigration and employment legislation in the United States still needs significant improvement to deal with migrant integration, according to the discussants.

From left: Mary Jordan, national correspondent for the Washington Post moderates a panel with former director of national intelligence John Negroponte, and former secretaries of the US Department of Homeland Security—Michael Chertoff and Tom Ridge.

“If you want to fix the problem, we need a structured way for people to work legally and come out of shadows to pay their taxes, to pay their social security. This is one of the best tools we have to reduce the amount of illegal flow that otherwise comes into the United States,” said Chertoff.

“Having a legitimate guest-worker program that satisfies the needs of American employers, but gives people the ability to come and go as they please answers two needs: a desire for people to work and a desire for employers to have worker,” he added.

Negroponte contended: “This is not just a border issue. It’s a domestic labor issue.”

With the US presidential campaign in its busiest season before the Democratic and Republican conventions later this summer and the general election looming in November, the panelists offered basic policy prescriptions for the next administration.

“The Trump rhetoric is so alarming because if there are two things that have helped the US economy over the last two hundred years they are immigration and trade, and those are the two things he wants to go after,” said Gutierrez.

The arguments purported by US presidential candidates against the US-Mexico relationship have “only been successful in a certain portion of the population, the primary voter, which is not representative of the mainstream national voter. I’m not sure that these arguments will play nationally. The concept that the Mexican government is sending its worst people to the US is simply false advertising,” he added.

Polls on Trump’s support among Hispanic voters are not promising. They have placed the Republican candidate anywhere between 18 and 23 percent of the voter base—well below historical benchmarks.

“I prefer presidents who tear down walls, not build them,” he added.

Mitch Hulse is an editorial assistant at the Atlantic Council. You can follow him on Twitter @mitchhulse.