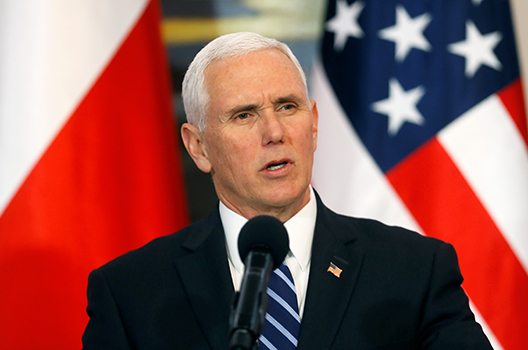 US Vice President Mike Pence, addressing US and Polish armed forces in Warsaw on February 13, emphasized the importance of NATO, reaffirmed the US commitment to the principle of collective defense, and encouraged allies to meet the Alliance’s defense-spending goal. It is an open question, however, whether his boss, US President Donald J. Trump, shares his conviction.

“While Vice President Pence’s words were eloquent and reassuring, allies have learned that there is a disconnect between the administration’s policy and the president’s own feelings about NATO and other US alliances,” said Alexander Vershbow, a distinguished fellow at the Atlantic Council’s Scowcroft Center for Strategy and Security and a former deputy secretary general of NATO.

“We saw this when Pence went on a similar ‘reassurance tour’ two years ago, featuring an appearance at the Munich Security Conference, only to see the president fumble several early opportunities to reaffirm his commitment to NATO’s Article 5 guarantee,” said Vershbow.

“Trump finally got it right on Article 5 during his own visit to Warsaw in the summer of 2017, and he seemed to declare victory on the burden-sharing issue during his State of the Union address two weeks ago.  But allies worry that his transactional, zero-sum approach could flare up again at the slightest provocation—for example, if the current truce on trade between the United States and the European Union breaks down,” he added.

In his address in Warsaw, Pence said: “[T]o confront the threats that we face today, the people of Poland know, and the people of the United States know, that the free world needs the members of NATO to be strong and united.  And so we are.  We stand together in defense of our alliance and all that we hold dear.  And each member nation, we know, has a vital role to play.”

While affirming the US commitment to Article 5, which enshrines the principle of collective defense, Pence also urged allies to meet the 2 percent of defense spending goal set at NATO’s Wales Summit in 2014. “At the heart of our NATO Alliance is a solemn promise that an attack on one is an attack on all,” Pence said. “But to keep this oath requires preparation, it requires investment.  And for every NATO member to uphold their commitment to our common defense, we need to work together.”

Daniel Fried, a distinguished senior fellow in the Atlantic Council’s Future Europe Initiative and Eurasia Center, said: “Vice President Pence’s affirmation of the US commitment to its NATO allies is welcome. He did a good job integrating language of solidarity with a call for allies to invest more in their own security.”

Noting the significance of the location of Pence’s address, Fried said: “The message of solidarity is especially good for Poland, a solid ally exposed to potential Russian aggression, eighty years after a failure of solidarity led to a Nazi-Soviet attack on Poland and the Second World War, and thirty years after Poland led the way to the downfall of the Iron Curtain and a generation of peace, prosperity, and democracy throughout Europe.”

Fried said he hoped Trump “can make similar statements, not just in Poland but in Germany and other European countries.”

After surprising his closest advisers by failing to explicitly commit to Article 5 at a meeting of Alliance leaders in Brussels in May of 2017, Trump affirmed US commitment to NATO’s collective defense article two months later.

On June 5, addressing the Atlantic Council’s Distinguished Leadership Awards dinner in Washington, Pence affirmed the US commitment to NATO and Article 5.

Affirmation of NATO from US officials is always welcome news for allies, but especially so when it comes from the Trump administration which is led by a president who has shaken the faith of some of the United States’ closest allies.

Like Barack Obama before him, Trump has pressed allies to meet the two percent of GDP defense spending goal. The target date for achieving that goal is 2024. But as allies’ spending has inched up, Trump has touted this increase as a direct result of his pressure.

Trump can “claim success in squeezing additional defense spending out of the allies since he took office and began hammering them to fulfill the two-percent-of GDP pledge. But the upward trend began before he took office, in 2015 and 2016, as allies reacted to the new threat posed by an aggressive Russia after its invasion of Ukraine in 2014,” said Vershbow.

Fried pointed out that Trump and many presidents before him have urged NATO allies to spend more on their own defense.

“Trends are good and the president can claim some of the credit for pushing the issue. But the president’s messages on NATO have been mixed—it is one thing to push for more military spending by allies but another to suggest that the United States regards NATO as some sort of income-generating instrument,” Fried said. “American power has kept the general peace in Europe for over seventy years. Casting doubt about whether America will honor its commitment to its allies, especially when allies fought at our side in Afghanistan and Iraq for many years, damages the United States, and could be taken as a green light for aggression.”

Pence maintained that while the United States’ security and prosperity is a priority for the Trump administration, “America first does not mean America alone.”

Nevertheless, Trump’s approach to allies has forced some in NATO to look at what they can do by and for themselves.

“The damage caused by the president’s bullying to the trust and confidence that underpins NATO unity may be hard to repair, even as NATO’s defense posture and readiness continue to improve,” said Vershbow.

Making the point that the “NATO Alliance is not something apart from the United States,” Fried said: “Some NATO allies, like Estonia, Latvia, Lithuania, and Poland, are increasing their readiness, making it clear that they will fight if attacked, a message which the Russians understand. Germany, Canada and Great Britain, as well as the United States, are leading NATO deployment in these countries.”

Noting that the European Union has discussed the possibility of raising its own defense profile for many years, Fried said: “This can help, if done in ways that improve defense capacity.”

However, Vershbow said, European capabilities are far too meager to allow the Europeans to take greater responsibility for their own defense.

“As a first step, they should set a higher level of ambition so that, within a decade, Europe can deliver at least half of the key high-end capabilities NATO needs to deter and defend against Russia, capabilities now provided almost entirely by the United States,” he suggested.