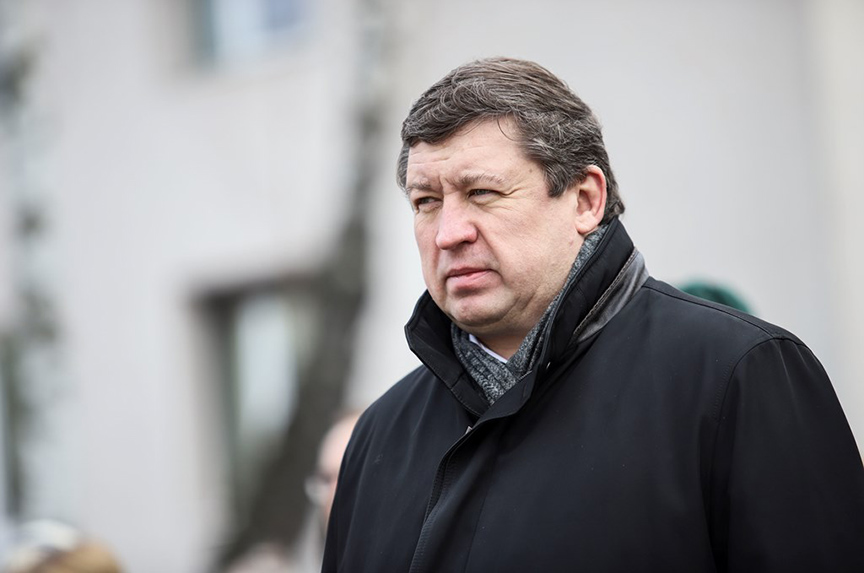 “It’s one of my dreams, but only a dream… that we would address tactical nuclear weapons in the same manner as mid-range or strategic [weapons] but unfortunately it's not the case,” said Lithuanian Defense Minister Raimundas Karoblis. (Photo courtesy of Lithuanian Ministry of De-fense/Ieva Budzeikaite)

Not all NATO allies are reassured by the pledges coming from Washington and NATO headquarters that there will not be more nuclear weapons stationed in Europe after the expected demise of the Intermediate-Range Nuclear Forces (INF) Treaty in August.

Some European governments would like to hear just the opposite: that the West will stop at nothing to combat Russian aggression, including countering Moscow’s INF-busting 9M729 missile system with more nuclear weapons on European territory if necessary. Baltic diplomats have said privately they believe ruling out such a deployment is a strategic mistake.

Lithuania has been perhaps the most vocal about the threat, with Russia’s nuclear-capable Iskander missiles now stationed plentifully and perhaps permanently just over its border in Kaliningrad, the Russian enclave nestled between Lithuania and Poland. But unlike in Western Europe, where new nervousness is provoked by implications of the INF collapse, for Vilnius, reality sunk in a long time ago.

Speaking to Channeling Brussels at the Munich Security Conference in February, Lithuanian Defense Minister Raimundas Karoblis emphasized “we are [already] targeted by tactical nuclear weapons with range of up to 500 kilometers,” referring to the Iskanders. “So for us, it’s not a new situation at all,” he added.

That doesn’t mean Lithuania supports an arms race, Karoblis underscored, but he said, “on the other hand, of course, it’s really a wider question that NATO needs to concentrate on technology, new technological development. Nukes is one of the capabilities of NATO as a deterrence measure.”

US Secretary of State Mike Pompeo on February 1 announced that the United States was suspending its participation in the INF Treaty. “We can no longer be restricted by the treaty while Russia shamelessly violates it,” he said. The US withdrawal is expected to take effect in August.

The Lithuanian government continues to make the case that limiting arms-control efforts to the 9M729 outlawed by the INF Treaty is a short-sighted and dangerously narrow view with the beefed-up contingent of Iskanders in Kaliningrad. Vilnius has long argued these missiles are a threat to all of Europe, but the concern has not been particularly contagious.

“It’s one of my dreams, but only a dream,” Karoblis said, “that we would address tactical nuclear weapons in the same manner as mid-range or strategic [weapons] but unfortunately it’s not the case. This is our situation.”

The Lithuanian government has long advocated a stronger NATO presence in the air over the Baltic states and to turn the current “air policing” mission into “air defense.” In addition, Vilnius has asked the United States to install long-range Patriot and short-range Avenger missile-defense systems in Lithuania. Neither wish has yet been fulfilled, but there have been some steps forward. In December, NATO launched two long-range radars there which tie into the Alliance’s Integrated Air and Missile Defense System, and a third radar is expected to become operational in 2020.

Nonetheless, Karoblis is still pessimistic about the threats in his neighborhood getting the attention his government believes is necessary. “On INF, maybe some miracles will happen,” he said, but “we don’t expect that we will get solutions—any solutions—on tactical nuclear weapons.”

The United States cites China’s unbridled advancement in the nuclear field as a secondary reason for abandoning the INF. But while Karoblis acknowledged China is a “real player,” he emphasized that “from our perspective I think and from the European perspective, the major risk is the Russians.”

“We need to take care of the hierarchy of the threats,” Karoblis said, listing them from immediate short-term concerns such as North Korea and Iran, moving on to Russia as the “”medium-term” menace and then China as a collective long-term threat due to competitiveness in sensitive sectors, not likelihood of attack.

Meanwhile, Beijing has done nothing to ameliorate worries about its atomic ambitions. At the Munich Security Conference, German Chancellor Angela Merkel led the call for China to join a new INF, but that suggestion was quickly quashed by Beijing. “So far we’ve received a very clear response from Chinese representatives,” Karoblis explained, “who said that it’s bad that INF is in the process of denunciation but… they are not eager to join such a format because these capabilities are necessary for the security in their region.”