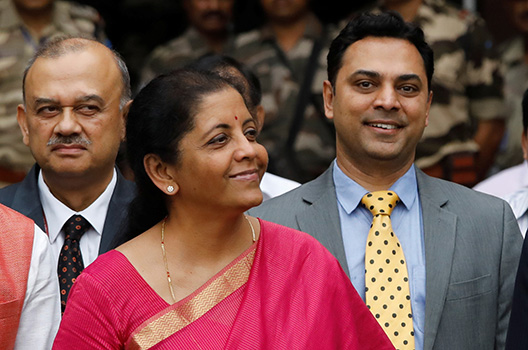 India's Finance Minister Nirmala Sitharaman (C) and Krishnamurthy Subramanian (R), chief economic adviser pose during a photo opportunity outside their office before the presentation of the federal budget in the parliament in New Delhi, India, July 5, 2019. (REUTERS/Anushree Fadnavis)

Presenting her maiden budget on July 5, India’s Finance Minister Nirmala Sitharaman signaled her ambition to transform India into a $5 trillion economy by 2025. No doubt India has the potential to achieve this goal but succeeding requires recognizing and addressing the challenges it faces.

Unexpectedly, a primary obstacle to India’s ambitions is the United States itself, as evidenced by the stalled and frustrating trade talks between Delhi and Washington. Disagreements about data privacy, e-commerce, the medical device price cap, dairy, and now foreign direct investment (FDI) into the insurance sector are all contributing to the on-going trade impasse and growing tensions. Going by the US administration’s recent public statements, there is little reason to be optimistic for progress, and more reason to believe that harder times lie ahead for the bilateral trade relationship.

One of the perceived obstacles is on e-commerce.

India is one of the top three global economies in terms of digital consumers, with 560 million internet subscribers in 2018. It is home to the second largest internet subscription market in the world, which is poised to grow to 830 million users by 2021.

Given this large consumer base, it is no surprise that India’s e-commerce industry is thriving and growing exponentially. The e-retail industry worth $38 billion in 2017 is projected to reach $200 billion by 2026. While rising income levels are a core reason for this expansion, greater access to the internet, the permeation of smartphones, and the increased popularity and functionality of online payments systems have also propelled India’s e-commerce growth. And the potential for future growth is boundless: the current share of online retail is just 3 percent of the total retail in India and is projected to be a mere 5 percent by 2020.

The immense potential of India’s domestic e-commerce sector has attracted the attention of domestic and international capital. Investments in the e-commerce industry in India via private equity and venture capital deals were worth $2 billion in 2017 and $1.2 billion in the first half of 2018. Walmart’s acquisition of Flipkart, valued at $16 billion, heralded the arrival of India’s e-commerce sector on the global stage. But the dynamism of the sector has outstripped the policy and regulatory framework that governs it.

India’s e-commerce regulations, last updated in December 2018, have reiterated the norms of online retail in India. From 2000 till 2016, the e-retail industry has been based on a business-to-business (B2B) model or marketplace e-commerce. Domestic e-commerce companies largely funded by venture capital, and online-only stores supported by foreign portfolio investments, were operating on wafer-thin margins. In March 2016, the Indian government allowed 100 percent FDI for online retailers of goods and services through the automatic route, meaning that no special permission from any governmental authority is required to invest, but prohibited FDI in an ‘inventory-based model,’ when an e-commerce entity owns the products and services it directly sells to consumers.

The December 2018 notification doubles down on this restriction, prohibiting e-commerce platforms from holding exclusive contracts with vendors, selling products from vendors in which they hold equity, and selling more than 25 percent of their product on a single platform. Effectively, this most recent government notification prohibits an inventory-based model for e-commerce completely. This policy pronunciation undermines the existing business model of the major US e-commerce companies seeking to enter the Indian market and will require considerable adjustments to comply with the regulation.

How did we get here? The most charitable interpretation of the facts is that both the regulator and the regulated are reacting and evolving simultaneously to the dynamism in the e-commerce sector. Both justify their preferences as in the interest of the consumer. Whilst industry tries to ensure consumers get the best price for their purchase, government aims to ensure that consumers are not coerced into buying a certain product.

A contrasting dynamic has played out in the Indian retail market over single-brand retail, which usually brings premium or luxury goods in to the market. As per policy, 100 percent FDI is allowed in case of single-brand retail through the automatic route, so long as at least 30 percent of the value of goods is sourced from India. The government is considering relaxing this 30 percent mandate for single-brand retail in a bid to draw in more companies. Simultaneous functioning of online and offline stores is also allowed for single-brand retail. The rules have resulted in several joint venture (JV) lifestyle brands trying to go solo in the India market. This is driven by rising demand for more high-end brands and enabled because the regulator and the corporate entities have convergent preferences on this issue.

In the future, it may be highly likely that the retail sector is further liberalized with the caveat of local product sourcing of majority percentage. Inventory-based e-commerce may also be considered. It is also unclear whether data localization will also be included in the draft e-commerce policy.

The coming months will witness continued policy discussions and innovations relevant to e-commerce. This is precisely why there have been countless consultations between the Indian Ministry of Commerce and US e-commerce companies over the past two weeks. The mandate from both Indian Prime Minister Narendra Modi and US President Donald J. Trump to tackle the trade issue is also a reason for cautious optimism, but policy makers in Washington should not underestimate the seriousness with which Delhi takes these issues. Achieving a majority of local product sourcing, ensuring the future of inventory-based e-commerce, and promoting data localization are key issues for Delhi.

With so much at stake in e-commerce, and with the United States being home to two of the world’s largest e-commerce businesses in Amazon and WalMart, the next round of trade talks between India and the United States carries high stakes and will be fraught with tension. Finding a compromise that is mutually beneficial is everyone’s goal, but the confidence of the finance minister in declaring her ambitions for the Indian economy is mirrored by the resoluteness of her government to articulate a policy framework for e-commerce that addresses all the parties’ concerns, but not at the expense of India’s interests.

Ridhika Batra is the director of the Federation of Indian Chambers of Commerce and Industry-USA. You can follow her on Twitter @batraRidhika.