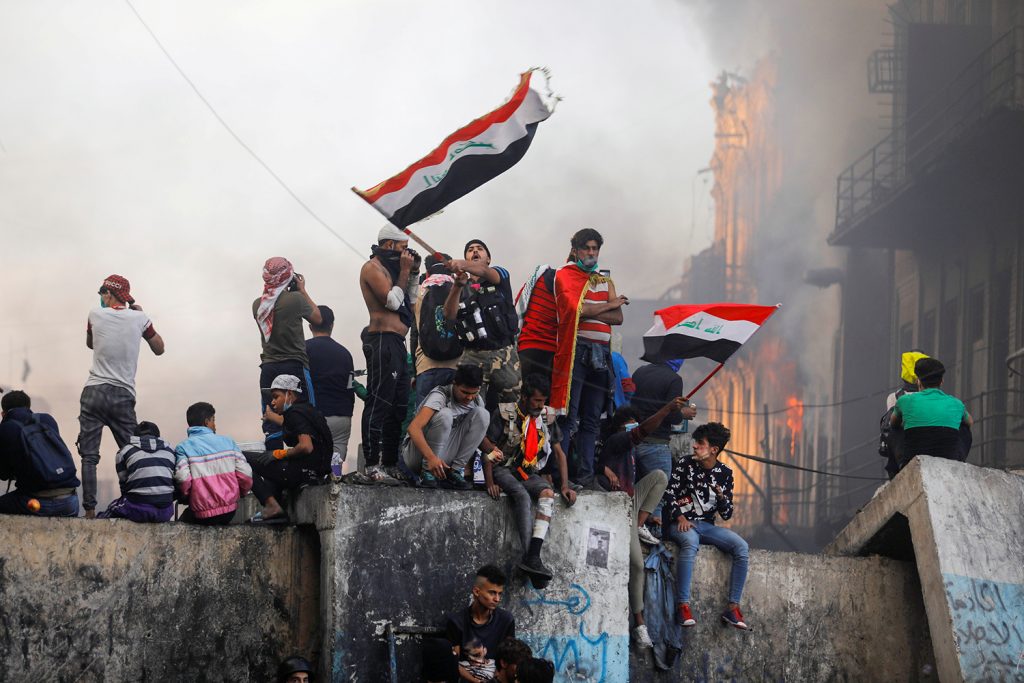 On November 29, Iraqi Prime Minister Adil Abdul-Mahdi submitted his resignation to the Iraqi parliament, which was accepted on December 1. This follows a November that saw more deaths of protesters in southern Iraq, the burning by demonstrators of the Iranian consulate in Najaf, and a call on November 29 by Grand Ayatollah Ali al-Sistani, made through a sermon delivered by his representative in Najaf, for the parliament to “reconsider its options in that regard.”

My colleagues here at the Atlantic Council elsewhere address the issues Iraqis face as they come to grips with the current government’s inability, after ISIS’s defeat, to solve Iraq’s problems of inadequate basic services, lack of economic opportunity, and corruption. The protesters, who have no clear leader, have consistently called for the government to solve these problems or make way for other leaders who will.

Lessons for the United States

The Trump administration and its supporters should not think Iraqis favor the United States over Iran in their struggle for influence. It is true that Iraqi protesters burned the Iranian consulate in Najaf on November 27, and earlier had scaled the walls of the Iranian consulate in Karbala on November 4, and last year burned Iran’s consulate in Basrah. Numerous interviews with protesters make clear they resent the extent of Iran’s influence in Iraq’s politics, including Iran’s near-veto power over who is Iraq’s prime minister. The protesters are well aware of Iran’s corrupting influence in Iraqi politics, which affects a number of both Shia and Sunni politicians. They understand that Iran’s influence is aimed at benefiting Iran, not the Iraqi people.

That does not mean that Iraq will make a binary choice between aligning with the United States against Iran. Many of the protesters previously supported Muqtada al-Sadr, who resisted US influence during the 2003-2004 occupation, and whose family was also a symbol of resistance to Saddam Hussein and his brutal regime. Moreover, most Iraqi politicians supported Abdul-Mahdi’s efforts to be on good terms with both Iran and the United States.

United States policymakers need to recognize that Iraq’s protesters are ready to hold their own leaders and Iran responsible for the failings of the last fifteen years. The fact that the United States has shown more respect for Iraqi democracy than Iran has is very important and needs to stay a tenet of the United States’ Iraq policy. Arm-twisting Iraqis over Iraq’s ties to Iran might be President Donald J. Trump’s first instinct, but more experienced voices in the White House, the State Department, the Pentagon, and elsewhere know that forcing Iraq into a “with us or against us” choice between Iran and the United States could result in Iraq being pushed into Iran’s orbit—to the detriment of the United States’ national security interests.

Instead, the United States should use persuasion, not muscle, to encourage Iraqi officials to move in the right direction. The results will be slower, and will require support from the Congress, but the results will be much more long-lasting. The United States need to find ways to help Iraqi universities educate the emerging generation of Iraqis on how to build democratic, rule-of-law based societies. Now is the time to increase the number and scope of State Department International Visitors Programs and increase the number of student visas for Iraqis studying history and journalism. A program to build a generation of Iraqi legal scholars grounded in the successes and failures of Western constitutional thought could help shape how Iraq reforms its 2005 constitution. The United States has other ways it can help Iraqis to reduce corruption and increase government transparency so that all Iraqis benefit from Iraq’s oil wealth.

Iran’s policy towards Iraq appears focused first and foremost on preventing Iraq from ever again posing a threat to the current Iranian system of clerical government. To achieve this, however, Iran uses Qasim Soleimani’s model of making Iraq into another Lebanon, where it wants Iranian-supported and -dominated militias to be a lasting, parallel power structure that will be under Iran’s control, outside the Iraqi constitution. Iran’s reaction to Abdul-Mahdi’s effort in October to resign was to show support for him but also to push Iran’s supporters in the Iraqi government to offer cosmetic reforms and crack down harder on the protesters.

Iran’s instinct will be to urge its Iraqi supporters to replace Abdul-Mahdi, who tried to be friends with both Iran and the United States, with someone who is in Iran’s pocket. But Iran has no miracle worker among its Iraqi supporters who could deliver on basic services, the economy, and anti-corruption that the protesters—and many Iraqis—are demanding. This leaves Iran with (1) trying to ensure control through a crackdown on protesters or (2) increasing efforts to suborn the Iraqi political class and keep Iraq’s parliament backing leaders acceptable to Tehran. Either approach is almost certain to blow up in Iran’s face. A more pro-Iranian Iraqi government that fails to deliver would likely bring more Iraqis into the street, and at some point someone, probably from Iraq’s military, would try to take power through extra-constitutional means.

Iran would be wiser to back off, and to encourage Iraqis to find a way of meeting the demands of the protesters while respecting the Iraqi constitution. This is the course the United States is already following.

As I wrote in October, and as others have said, it is increasingly clear that Iraqis need to consider serious constitutional reforms. Iraq’s present constitution, adopted in 2005, was drafted by Iraqis with some US and international help that, to put it charitably, could have been much better. The present system intentionally gives a lot of power to the sectarian and ethnic-based parties recognized by the United States and Iran after Saddam Hussein’s overthrow. It is a recipe for both gridlock and an inability to legislate or govern. Serious reform of the current system, which many Iraqis recognize is both ineffective and corrupt, is almost impossible under the current constitution.

Thomas S. Warrick is a nonresident senior fellow at the Atlantic Council. He was most recently the deputy assistant secretary for Counterterrorism Policy at the US Department of Homeland Security and a career member of the Senior Executive Service.

The Iraqi prime minister’s resignation: A way ahead for the United States

Iraq’s Prime Minister, Adil Abdul-Mahdi, should be feeling a great sense of relief. Since mid-October, media outlets have reported his intent to resign amid violent protests that have engulfed much of Iraq. His resignation should be no surprise. Since the fall of Saddam, Iraq has a history of picking leaders who do not pose a […]

Ongoing violent protests in Iraq have shaken the fragile stability of the country, as well as Iran’s carefully constructed geopolitical strategy for its neighbor and historic rival.

The news on November 29 that Iraqi Prime Minister Adil Abdul-Mahdi will resign is unprecedented in post-2003 Iraq. Many questions must be answered before his successor is appointed, and in the meantime, we can expect unrest to continue.