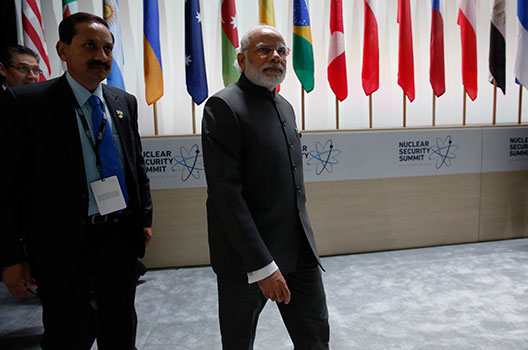 This article is part of a series.

The Nuclear Suppliers Group (NSG) plenary meeting in Seoul ended on June 24 without resolving India’s request to join the group. The final statement issued at the conclusion of the meeting lacked an explicit reference to India’s application to join or an outline for a future course of action. With the exceptional waiver granted by the NSG to India in 2008, membership in the group should have been a relatively straightforward decision. However, larger geopolitical factors contributed to the stalemate.

Evolution of the NSG

Originally known as the London Club, the NSG was established in 1975 with seven countries—the United States, the former USSR, the United Kingdom, France, West Germany, Canada, and Japan—in order to tackle the challenges of nuclear proliferation by focusing on export controls, outside the framework of the 1970 Nuclear Non-Proliferation Treaty (NPT). The immediate catalyst for forming the NSG was the nuclear test conducted by India in 1974, although there were also concerns about French plans to export a reprocessing plant to Pakistan. At the time, France was not a party to the NPT and West Germany planned to export key elements of the fuel cycle to Brazil—West Germany was a party to the NPT; Brazil was not.

The NSG did not convene between 1977 and 1991, when concerns about Iraq’s nuclear program surfaced following the first Gulf War. In addition, the end of the Cold War eliminated the threat of a US-Soviet nuclear conflict. Proliferation emerged as the new threat. The idea of making encompassing safeguards a primary condition for nuclear transfers—first proposed in 1977—was finally adopted in 1992. Furthermore, NSG export control lists were expanded to include dual-use items and technologies. By this time, NSG membership had expanded to twenty-six countries—including China, which joined the group in 2004. Since 1991, the NSG has hosted both technical and policy-based meetings. Legally, however, it remains an informal grouping of likeminded states committed to nuclear nonproliferation, implemented through a system of harmonized export controls. Decisions in the group are taken by consensus. Today, the NSG has grown to include forty-eight participating governments (PGs).

As an informal grouping comprised of so-called PGs, instead of member states, the NSG has set out five factors, not criteria, for considering applications. Prospective PGs should: (1) be able to supply the items on NSG control lists; (2) act in accordance with NSG guidelines; (3) have a legally based export control system; (4) support international nonproliferation efforts; and (5) be a signatory to treaties that require encompassing safeguards, including the NPT. This is an indirect nod to the NPT, which acknowledges five nuclear weapon states, defined as those that exploded a nuclear device before January 1, 1967. Evidently, India more than fulfils the first four factors but cannot meet the fifth one because it became a nuclear weapon state in 1998, and therefore, cannot be subjected to full-scope safeguards.

India and the NSG

In 2008, the NSG granted India a waiver from the full-scope safeguards requirement, allowing the country to sign civil nuclear cooperation agreements with the United States, France, and Russia for the supply of nuclear power reactors, and with nearly a dozen countries for long-term uranium fuel supplies. Addressing the NPT factor, the NSG decision in 2008 stated that India contributes to the “widest possible implementation of the provisions and objectives of the NPT.” As part of the discussions leading to the waiver, India separated its military and civilian fuel cycles, placed its civilian facilities under International Atomic Energy Agency (IAEA) safeguards, and signed the Additional Protocol—a legal document that supplements IAEA safeguards agreements for member states. India also became a voluntary adherent to NSG guidelines. For the last seven years, India has continued its engagement with the NSG and finally, on May 12, 2016, applied to formally join the NSG.

Agreeing to formally join the NSG and the other export control regimes such as the Australia Group, the Missile Technology Control Regime (MTCR), and the Wassenaar Arrangement reflects a policy shift by the Indian government. During the Cold War, India had been critical of these regimes—condemning them as mechanism to deny technology to developing countries although, in practice, India has maintained equally strict controls on exports of sensitive materials and technologies. In the run up to the 2008 waiver, India began to modify its position and demonstrate its credentials as a responsible nuclear weapon state. The United States backed India’s decision and the joint statement to the NSG issued—following US President Barack Obama’s visit to India in 2010—declared that “the US intends to support India’s full membership in the four multilateral export control regimes.” This position has been reiterated at subsequent summits.

Pakistan’s application to join the NSG, made just days after India’s request, was clearly part of a coordinated strategy with China to block India’s admittance. Prior to the Seoul deliberations, India had made it clear that after admission it would not block Pakistan’s entry. However, China and Pakistan seemingly realized that—given Pakistan’s tainted proliferation record—other countries are just as likely to question Pakistan’s credentials. Chinese statements that India’s entry into the NSG would upset the balance in South Asia also revealed Beijing’s preference to keep India hyphenated with Pakistan and locked into regional frameworks. In any event, Pakistan needs to undertake a fair amount of preparatory work to qualify for NSG membership. China thus used procedural debates to block a decision at Seoul, suggesting that NSG members should have broader discussions on the technical, legal, and political aspects behind the participation of non-NPT states in the NSG. A number of smaller countries that take a somewhat evangelical view of the NPT and are active supporters of the “humanitarian initiative” against nuclear weapons fell for the Chinese ploy.

In hindsight, India underestimated China’s opposition. In 2008, China had opposed the exceptional waiver for India but did not want to be the only holdout. Today, a relatively stronger China is led by a considerably more assertive leadership. Many NSG members find China’s stance hypocritical, given its own proliferation record and occasional amnesia regarding its ongoing nuclear cooperation with Pakistan.

India and its supporters, led by the United States and France, have suggested that a special plenary session be held later this year to admit India but, given the polarization generated at the Seoul meeting, they need to clinically evaluate the prospects and then pursue a strong and coordinated strategy to ensure a favorable outcome. Meanwhile, India has joined the MTCR and the NSG blip should not derail its efforts to join the Wassenaar Arrangement and the Australia Group later this year.

The 2008 exceptional waiver enables India to pursue civilian nuclear cooperation with NSG states and stands as an acknowledgement of India’s impeccable nonproliferation record.

Rakesh Sood, who served as then Indian Prime Minister Manmohan Singh’s special envoy for disarmament and nonproliferation from September 2013 to May 2014, is currently a distinguished fellow at the Observer Research Foundation in New Delhi.