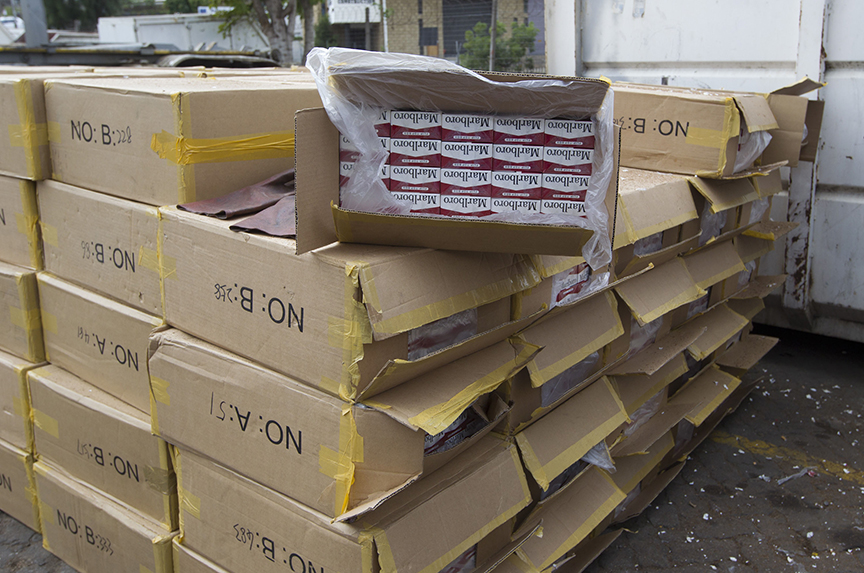 In South Africa, cigarettes are ubiquitous on the black or gray market. They are mostly sold loose or in packs at roadside kiosks and small informal shops known as spazas. This illicit market accounts for a large portion of the total market for cigarettes, and as a result major multinational companies have launched massive and expensive campaigns to shape the state’s response to this problem. Yet both the smaller companies accused of smuggling cigarettes and the multinationals that rail against the practice have been implicated in, at least, serious impropriety and, in the worst cases, corruption, money laundering, and tax evasion. All of this has been vividly documented in long-running media exposés — but until now these exposés haven’t led to arrests or prosecutions.

Illicit cigarettes have long been associated with conflict, terrorism financing, and organized crime. Yet the flourishing illicit tobacco market in South Africa speaks to a less sensational but equally destabilizing set of risks. At the core of this challenge is the state’s ability to provide effective regulation of an industry that is vulnerable to gray and black markets. As is true in South Africa, many countries around the world must provide this regulation in the midst of high levels of official corruption and a history of accommodating powerful private sector actors rather than bringing them to account. As such the challenge is bound up with the state’s ability to regulate legal markets, not just eradicate illegal ones.

The case study presented in my Atlantic Council working paper on the illicit tobacco trade shows how failures in the South African state from 2013 to 2018 led to an explosion in this activity.

Illicit cigarette trade began to pick up in South Africa around 2002 at a time when there was a rise in the presence of counterfeit products on the market and cross-border smuggling from Zimbabwe. But it wasn’t until 2006, when the modus operandi switched from cross-border smuggling to under-declaration, that the illicit cigarette trade started to flourish. At this point a core group of small tobacco companies set themselves up in competition with big multinational tobacco companies. Some of these independent producers set up factories that employed numerous methods to evade paying taxes on their products: they operated undeclared double shifts, ran their machines at night, and/or hid the true scale of their production by paying off customs officials and using fraudulent paperwork.

As this illicit industry picked up, profits escalated, making the beneficiaries more visible to law enforcement. But in a context conducive to corruption, it also gave them power to buy political protection. Both the South African Revenue Service and the South African police set up dedicated teams to tackle the problem. However, the police’s task team worked closely with individuals linked to Big Tobacco to undertake their investigation, which compromised the effort.

Many people with whom I spoke for this study attributed the considerable influence Big Tobacco has in South Africa to its position as a substantial taxpayer; a sophisticated public relations and lobby presence, funded by corporate coffers; and the private resources that these companies have invested into investigating others in the trade. There is evidence that these private resources have included corporate espionage and money laundering.  The close relationship Big Tobacco had with the police task team may have deflected attention away from their own operations.

In 2014, the South African Revenue Service’s investigations into several illicit trade and financial flow cases collided with corrupt interests and exploded in an ugly scandal involving the small and multinational tobacco companies it had been investigating. Eventually, the South African Revenue Service was restructured, seemingly to protect the interests of political figures, decimating its capacity to investigate the illicit economy. The restructuring also diminished the state’s ability to reign in corporate misbehavior, hampering the investigation of complex illicit financial flows.

This had a terrible knock-on effect for the fight against the illicit economy. A recent Commission of Inquiry into concerns about the decline in the integrity of the South African Revenue Service revealed that, through the restructuring, tremendous damage was done to “the benefit of delinquent taxpayers and the disadvantage of major taxpayers who try to comply.” The tobacco sector was held up as primary example of this problem. “Measures to counter criminality were rendered ineffective,” concluded retired Judge Robert Nugent, “and those who trade illicitly in commodities like cigarettes operate with little constraint.”

There were also consequences for the shadow economy. Before it was restructured, the South African Revenue Service provided imperfect but perceptible enforcement through its investigations and raids. When these declined, it led to unrestrained competition between tobacco smugglers, which fueled tensions between the various players. This tension has been linked to assassinations (successful and failed) and acts of vandalism. Cigarettes have also emerged as a preferred currency in the underworld as their ease of distribution in cash-based markets makes them ideal for money laundering.

While this situation may seem rather bleak there are now signs of a recovery in South Africa. South African President Cyril Ramaphosa has pledged to root out corruption. On his watch, protection for players in the tobacco industry has declined and some areas of law enforcement have begun to regain strength. South African Revenue Service disputes with tobacco companies (both small and large), which were mothballed during the administration of Ramaphosa’s predecessor, Jacob Zuma, have been dusted off, and steps have been taken toward litigation and asset seizure.

There is now in South Africa a promising environment for tackling the illicit tobacco trade. Several government departments are acting to curb this illicit trade and reduce smoking-related diseases. There are also a range of non-state actors — from academics providing impartial evidence on the prospects and effects of policies to groups advocating for marginalized constituents and journalists investigating criminal offenders — that can contribute to the response.

A democratic framework has the potential to hold people committing criminal acts to account. There are also key policy and technological interventions, such as track-and-trace technologies, which could reduce the difficulties the state faces with regards to detection and monitoring. The trick lies in implementing an impartial response across the industry with a broad definition of illicit financial flows that captures criminal behavior by small and big players.

It is crucial South Africa gets the regulatory balance right and serves as a positive role model for the region.

Simone Haysom is a senior analyst at the Global Initiative Against Transnational Organized Crime. Follow her on Twitter @simonehaysom.