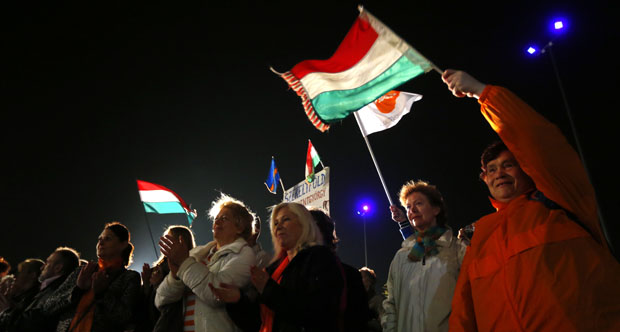 Hungary elected a parliament for the next four years on April 6, an event largely hidden amid the Ukraine-crisis and Afghanistan’s election the day before. But the victory of Prime Minister Viktor Orbán and his conservative nationalist Fidesz party suggests that Hungary will remain a cold, calculating, unenthusiastic member of the European Union and the transatlantic alliance. While the country’s economic woes and the rise of an extreme right-wing rival would warrant moderation, his confrontational approach to domestic and European politics is unlikely to change significantly.

Fidesz coasted to victory, with 45 percent of the vote against 26 percent for an eclectic coalition of the left-liberal opposition, and 21 percent for Jobbik, an extremist, anti-Semitic, anti-European group. LMP, a greenish, anti-establishment party barely made it to Parliament, with 5.2 percent. Turnout was relatively low at 61 percent.

In the new, heavily gerrymandered and distorted election system introduced by the ruling party, these vote tallies translate into an oversized majority for the government (65-67 percent of the seats), even if Fidesz got less votes than 8 years ago, when it was defeated. Some districts are still too close to call. These will decide whether Fidesz will keep its two-thirds majority in the new parliament, which would let it continue wielding practically unchecked power.

The reasons for Fidesz’s victory, the democratic opposition’s defeat, and Jobbik’s frightening success are many.

The ruling party enjoyed “undue advantage,” as pointed out by the OSCE observer mission. This was rooted in “the manner in which a large number of changes to the legal framework were passed, restrictive campaign regulations, biased media coverage and the blurring of the separation between a ruling political party and the state.” Lack of funding and media access handicapped the opposition. Indeed, the left-liberal opposition refused to congratulate the winner even if acknowledging the results. They claim that the elections were free, but not fair.

A significant gap in popular support between Fidesz and the opposition is difficult to deny. Orbán’s unique blend of conservative nationalist populism played well with the electorate, despite lackluster economic growth, rampant corruption and the gradual dismantling of the democratic system. His trump card was a series of arbitrary energy price cuts he engineered that are not sustainable in the long-run. His well-oiled and funded political and media-machinery mobilized its core voter base deftly and mounted a ruthless character-assassination campaign against key opposition figures. Meanwhile, errors by the opposition were plentiful: prolonged infighting, a weak prime ministerial candidate, wildly unpopular political figures and the inability to create a coherent narrative that would have appealed to the voters.

Jobbik capitalized on the social disgruntlement of many who suffered from the 2008-09 economic crisis. This was exacerbated by Fidesz’s deeply conservative policies in favor of the upper-middle classes. Jobbik’s borderline Nazi-style rhetoric on the country’s disenfranchised Roma population also built support among the non-Roma, particularly in the country’s impoverished east. A repeated good performance by Jobbik at the European Parliament elections in May is likely, and would feed into a trend of anti-EU forces gaining ground across Europe.

It is difficult to foresee what’s next. Orbán’s victory speech was surprisingly conciliatory. He emphasized togetherness and touted his government’s policy to be the defender of national interests but within the European Union – against which he rallied in the past two years. This may be part of a new narrative to guard his right flank against Jobbik, after Orbán’s earlier effort to outbid it in nationalism backfired. Orbán’s may realize, or will soon, that his economic policies are not sustainable in the medium term. Toning down the anti-capitalist and anti-EU drumbeat might be in order to lure in foreign investment.

Optimism must be tempered though: Orbán is a political chameleon who has changed his political colors many times. Confrontation is in his nature, so he is unlikely to remain off the political warpath for too long, either in domestic or foreign policy. If he pulls back from courting exit from the EU, that must not be confused with EU enthusiasm. He will continue to act as a drag on deeper European integration. NATO will remain a marriage of convenience for him, not of love. US-Hungarian relations will stay chilled after US opposition to Orbán’s dismantling of domestic political checks and balances in Fidesz’s previous term.

Orbán will also continue to pursue a dual-track approach in his neighborhood policy. While pragmatic in managing his relations with fellow nationalist populists in the region, like Slovakia’s Prime Minister Robert Fico, he will not shy away from fueling revisionist ideologies among ethnic minorities in those countries, leading to frictions with the majority.

Most worrying is that Orbán is expected to continue his “eastern winds” approach, which includes a strong pro-Russian stance. He sealed a nuclear deal with President Vladimir Putin before the elections and came opposed EU sanctions against Russia over its attack on Ukraine. Hungary is likely to offer Ukraine only supportive rhetoric, but no proactive contributions to NATO, EU or Visegrad Four actions to roll back Russia’s advances.

Orbán will want to stay involved with both the EU and NATO, but based only on financial and security interests, not shared values. As his methods may be contagious as other leaders in the region seek to emulate his political success, sooner or later we will have to face the detrimental effects of populism and nationalism on solidarity within the European Union and the integrity and cohesion of the transatlantic alliance.