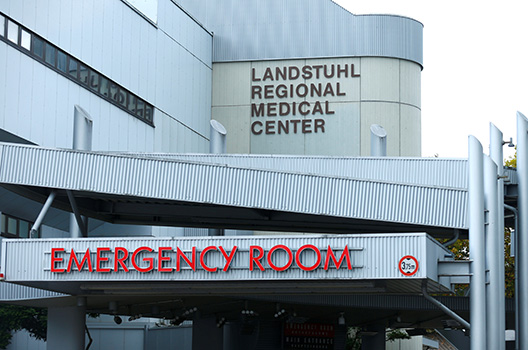 A general view of the hospital of the Military Regional Medical Center near Ramstein Air Base is pictured during an open day in celebration of the 65th anniversary of the hospital in Landstuhl, Germany, October 3, 2018. REUTERS/Ralph Orlowski

For years, policy makers in Washington have been focused on measures to reduce their European allies’ dependence on natural gas from Russia, from the promise of the Three Seas Initiative to pending bipartisan legislation championed by Senators Ted Cruz (R-TX) and Jeanne Shaheen (D-NH)introducing economic sanctions against foreign companies helping construct the controversial Nord Stream II pipeline from Russia to Germany.

Amidst this push, the US House of Representatives and US Senate are preparing for the final conference on the fiscal year 2020 National Defense Authorization Act (NDAA), which will also have an impact on Russia’s export of gas to Europe. The House version of the NDAA contains a floor amendment—the Huffman Amendment— sponsored by Congressman Jared Huffman (D-CA), striking out NDAA legislative language that calls to limit the use of Russian Federation fuels at US defense installations in Germany and other European nations. This amendment works against the goal of US energy policy in Europe that aims to boost energy security and help its allies diversify away from Russian gas.

In the fiscal year 2018 NDAA, there was a requirement for the Department of Defense to “reduce the dependency of all US military installations in Europe on energy sourced inside Russia” and to “ensure that all United States military installations in Europe are able to sustain operations in the event of a supply disruption.” This was followed in fiscal year 2019 with NDAA language that prohibited the Department of Defense from entering “into a contract for the acquisition of furnished energy for the new Rhine Ordnance Barracks Army Medical Center,” until the Secretary of Defense had certified that the base had minimized the use of Russian-supplied gas and utilized “a diversified energy supply from a mixed-fuels system.” Before the Huffman amendment, the 2020 NDA would take the next step of prohibiting the use of Russian-supplied gas by military installations, with a waiver possible for scenarios in which that was impossible to meet.

Currently nearly all US installations in Germany largely use the German commercial natural gas network, which relies on Russia for more than half of its natural gas supply. Currently, only one US military installation in Germany uses coal in small quantities: the Kaiserslautern military community’s energy company uses Pennsylvanian anthracite (hard coal). This anthracite use, however, totals less than one tenth of one percent of all energy requirements for US installations in Germany, with the contract due to expire in 2020 and unlikely to be renewed.

The Huffman amendment was introduced as effort to eliminate the “earmarking” of US coal for use in the United States’ European military installations. The “earmark,” however, was already eliminated by the Congress in 2015 and is not continued under the 2020 NDAA, which references the preference of domestic sourced energy but not necessarily coal. There are no legislative mandates to use US coal for any defense installations, in the continental United States or in Europe.

Having emerged as the world’s largest producer of natural gas and since 2016 the leading exporter of liquefied natural gas (LNG), the United States now has many more options at its disposal than coal or Russian gas to reduce its and its allies’ dependence on Russia. Germany has announced plans to build LNG terminals, which would facilitate its imports of US LNG. Building the terminal and the accompanying infrastructure, however, will take at least several years. Increasing imports of natural gas from Norway is one option, as is introducing alternative fuels.

The House and Senate NDAA Conference must now deal with the Huffman floor amendment, which was adopted by voice vote in a larger package of amendments. Had House members had chance to debate the ramifications of this specific language on the floor or been given the chance to vote on a free-standing version of this provision, its enactment would be in serious doubt, given its negative impact on a secure energy acquisition policy.

An urgent example of why the original NDAA language is needed is the planned construction of a new Army medical center near Ramstein Air Base in Germany. Authorized at a total cost of just under $1 billion, it is the largest military construction outside of the United States. As the replacement for the vaunted Army Landstuhl medical center, it will serve both the trauma and family medical needs of US armed forces spread over three continents. The Huffman amendment strikes out significant fiscal year 2019 NDAA language mandating energy security and resilience through utilization of a multi-fuels cogeneration facility, and increased use of domestic sourced energy, if available.

Today, the European Union relies on Russia for between 30 to 40 percent of its gas imports, while Germany’s dependency rate on Russian gas is growing rapidly, putting US military installations in Germany dependent on continued energy supply from Russia.

The security and geostrategic risks of overdependence on Russian natural gas are well recognized and documented. In testimony last fall before the US Senate Committee on Energy & Natural Resources, I commented at length on the oppressive history of recent Russian government attempts to use its energy exports as a tool of political influence. These include intimidation, coercion, or use of natural gas as a weapon by enacting supply cuts and dramatic price hikes across European states. While the Russian gas company Gazprom is unlikely to cut off gas supplies to its largest customer, Germany, interruptions are possible and the Kremlin can use its gas exports as a form of political influence.

Russian gas wars with Ukraine interrupted supplies to EU states in 2004 and 2008, and since 2014 tensions have continued. During the Kyiv-Moscow gas dispute of 2008-2009 in a bitter winter, the Czech Republic, Romania, Austria, Poland, Croatia, and Slovakia experienced gas shortages for two weeks. In Poland, there were civilian casualties due to freezing temperatures.

The fiscal year 2020 NDAA would have mitigated the potential risk of Russian dependence by introducing requirements for natural gas diversification away from Russian gas; the Huffman amendment rejects this concept.

As the most critical NATO power and a key security guarantor for many European members of the Alliance, the United States is directly implicated in the security repercussions of Europe’s energy dependence, especially as US defense installations in Europe largely are still reliant on Russian natural gas.

Agnia Grigas is a senior fellow with the Atlantic Council’s Eurasia Center and author of “The New Geopolitics of Natural Gas” and “Beyond Crimea: The New Russian Empire.”  Follow her on Twitter @AgniaGrigas.