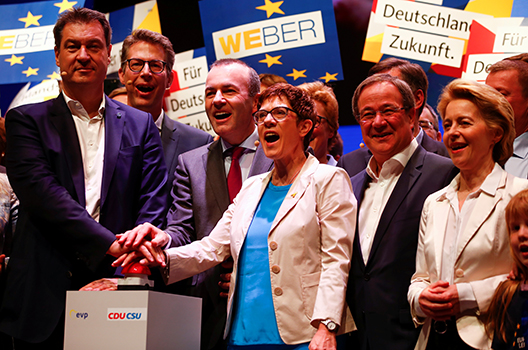 Continuing the recent domestic trend of political fragmentation, the parties of Germany’s ruling “grand coalition”—German Chancellor Angela Merkel’s center-right Christian Democratic Union/Christian Social Union (CDU/CSU) and her junior partners of the center-left Social Democrats (SPD)—are expected to lose significant shares of the vote in the European elections later this month compared to 2014. However, the outcome of the election in the European Union’s largest economy and most populous member state will not impact Germany’s broadly pro-European Union (EU) positions and strategy in significant ways.

The only strongly Eurosceptic party, the Alternative for Germany (AfD), is likely to moderately expand its seats in the European Parliament. But against the backdrop of Germany’s strong, above-average public support for the European project, major voter shifts are projected to remain largely within the wider pro-European mainstream—at the cost of the CDU/CSU and especially the SPD, and to the benefit of the Green Party and Free Democrats.

On May 26, German voters will choose the country’s ninety-six Members of the European Parliament from among forty-one parties through a proportional list system. Only the CDU and its Bavarian sister party CSU have opted to field state lists. All other parties are presenting national lists under the binary choice offered by German election laws.

European elections tend to attract lower turnout than national or state elections in Germany, but participation in 2014 increased from the low forties in the early 2000s to 48 percent. With general support in Germany for the European project well above the European average, polls suggest stronger pre-election interest in the vote than in previous years and a sense among the public of the 2019 election being a decisive vote for the EU’s future. Combined with growing policy differentiation over Europe among the main parties, this public sentiment points toward strong turnout again, and perhaps another increase, in 2019.

The European vote on May 26 will also coincide with elections in the city state of Bremen and local elections in eight other states.

If current projections hold, the Green Party will be the main winner on May 26, likely to celebrate an 8 percent increase for a total of 19 percent of the vote. Riding a wave of strong state election performances and growing overall popularity, the Greens will also benefit from the most pro-European base among Germany’s parties, the weakness of the grand coalition, and especially the Social Democrats, as well as a distinct campaign profile defined by staunchly anti-populist, pro-integration positions on Europe.

The Social Democrats will likely be the main losers on election night and will have to brace for another negative record after their worst postwar result in the 2017 federal elections. Three weeks before the ballot, the SPD is projected to win around 16 percent in the European elections, dropping eleven percentage points compared to 2014 and closely tracking dismal national polling figures since early 2018. The party again risks being relegated to third place in Germany in a continuation of a recent pattern of voter defection to the Greens seen since the last national elections and the SPD’s reluctant 2018 decision to join yet another grand coalition with Merkel.

Merkel’s CDU/CSU, led by the European People’s Party (EPP) German Spitzenkandidat (the Europe-wide EPP lead candidate for the post of European Commission president under the Lisbon Treaty) Manfred Weber in the European elections, is expected to escape with a proverbial black eye, with a projected 5 percent drop to around 30 percent of the vote. While the conservatives’ losses will probably be overshadowed in the media by those of the SPD, 2019 could still mark the CDU/CSU’s worst European election result and its worst showing at the national level. Differences on European policy between the CDU and CSU, although glossed over in a joint election manifesto, will likely re-emerge in the aftermath of the election. And as some observers have noted, with Annegret Kramp-Karrenbauer (AKK) taking a lead in the campaign and Merkel remaining in the background, the new CDU leader who is a known skeptic of ambitious EU integration plans, will likely force course adjustments after the election.

The AfD as the main Eurosceptic choice on the ballot is expected to increase its share of the vote by five percentage points to around 12 percent but will not dominate the debate in ways seen from nationalists and populists in other EU member states.

Among the other main parties, the liberals of the Free Democratic Party (FDP) are expected to make a comeback from their 2014 losses, gaining three to four percentage points for a 7 percent total. The Left Party, whose platform includes some EU-critical positions on economic, foreign, and security policy, is projected to remain stable at 7 percent as well.

The Campaign: Domestic Issues and Competing Visions for European Reform

Domestic issues are likely to take center stage in the campaign. Migration and border control will feature prominently given their continued importance in the German political debate after the 2015 migrant crisis. Social issues around equality, changes in the labor market, and climate change will be framed in a European context but driven by domestic public concerns.

At the same time, while all mainstream parties remain broadly pro-European in their platforms there is a growing tendency toward policy differentiation on the specifics of future reform of the EU. In contrast to the CDU, whose European platform largely supports the existing status quo in the national and supranational division of labor in the EU, the Greens are advancing strong positions for deeper integration on economic, monetary, and foreign policy integration in the EU. Similarly, the SPD is presenting a more pro-integrationist platform in the European elections. The European contest offers an opportunity for the Social Democrats to distinguish themselves from the CDU/CSU on Europe with a significant shift to the left on policy, which on domestic issues carries the risk of open conflict in the grand coalition.

Given Germany’s strongly pro-European public, the AfD has toned down its anti-EU rhetoric, instead trying to capitalize on the domestic hot-button issues around migration and links to labor policy and access to social services for non-German EU citizens. But an exit from the euro and even the EU remains in the program of the party, which started as a movement of eurozone sceptics amid the sovereign debt crisis in Europe and only later transformed into a primarily populist, nationalist anti-migration platform.

What Will Germany’s European Election Mean for the EU?

Given Germany’s 12.8 percent share of European Parliament seats—a share that will increase to 13.6 percent post-Brexit—the German vote has important implications for Parliament as a whole as well as for the power balance among pan-European political families.

The potential collapse of the Social Democrats on May 26 will deal a serious blow to their pan-European party group in Brussels, as the SPD constitutes the largest national delegation of the Progressive Socialists and Democrats (S&D). Combined with the British Labour Party’s eventual Brexit-related departure and dismal projections for Italy’s socialists, center-left losses in Germany will all but seal the widely expected end to the forty-year two-party majority in the European Parliament of the S&D group and the center-right EPP.

Overall, however, the elections will not significantly impact Germany’s broadly pro-European positions in Brussels, especially given public support for the EU and the European project. As previously mentioned, the largest part of voter shifts will occur within the mainstream of pro-European parties. At the same time, in light of growing party fragmentation in Germany that will continue in the European elections and the growing policy differentiation on important economic and eurozone reforms, it may become more difficult for the German government to ensure a cohesive position in Brussels and leverage sizeable German influence across political groups in the European Parliament in the next debates on Europe’s future.

The Impact in Berlin

Despite some speculation, the outcome of the European elections is highly unlikely to have any substantial short-term repercussions for national politics and either Merkel’s future or the survival of her grand coalition. Strong incentives and structural barriers will prevent a break-up of the grand coalition and snap elections in the near term. Similarly, a weaker showing of the CDU/CSU with 5 percent losses is unlikely to generate significant enough momentum among party officials and the base to accelerate Merkel’s departure from the chancellery, especially given the low turnout in European elections compared to national ballots. The elections will still require a cabinet reshuffle as German Justice Minister Katarina Barley of the SPD will move to the European Parliament and AKK may wish to secure a prominent ministerial post ahead of the 2021 federal election to boost her profile. All parties will carefully watch the outcome to refine campaign strategies for important elections in three east German states in the fall, which will be the real test for the CDU and the SPD.

Jörn Fleck is an associate director at the Future Europe Initiative of the Atlantic Council.