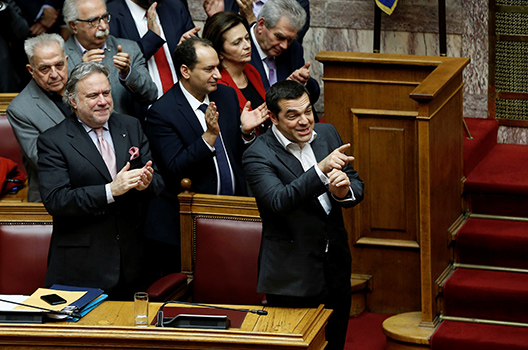 Greek Prime Minister Alexis Tsipras and members of his government applaud after a vote on an accord between Greece and Macedonia changing the former Yugoslav republic's name in Athens, Greece, January 25, 2019. (REUTERS/Costas Baltas)

Greece’s parliament narrowly approved a deal on January 25 that would see its northern neighbor change its name to North Macedonia and Athens lift its opposition to Macedonian accession to NATO and the European Union. The deal passed in a 153-to-146 vote.

The deal—known as the Prespa Agreement—was reached between Macedonian Prime Minister Zoran Zaev and Greek Prime Minister Alexis Tsipras on June 17, 2018. The Macedonian parliament approved the necessary changes to the constitution on January 11.

“The ratification of the Prespa Agreement is a major strategic milestone for the Western Balkans that will bring greater stability, security, and prosperity to the entire region,” said Michael Carpenter, a nonresident senior fellow at the Atlantic Council’s Eurasia Center, Future Europe Initiative, and the Scowcroft Center for Strategy and Security.

“The Greek and Macedonian parliaments both showed great courage in ratifying this deal, and Prime Minister Zaev and Prime Minister Tsipras have rightfully earned a place in history for hammering out this visionary compromise,” he said. “Despite the nationalist and demagogic rhetoric and Russian attempts to scuttle the deal, pragmatism and common sense prevailed. We can now look forward to welcoming the Republic of North Macedonia into NATO and deepening our cooperation with both countries.”

Congratulations my friend @tsipras_eu, together with our peoples we reached a historical victory. Long live the Prespa Agreement! For eternal peace and progress of the Balkans and in Europe! pic.twitter.com/f9aIpMa4Xz

Tsipras tweeted following the parliamentary victory that “today, we write a new chapter in the history of the Balkans. Nationalist hatred, disputes, and clashes are now replaced by friendship, peace, and cooperation. . . North Macedonia was born today. It will be a friend and ally of Greece in its efforts for security, stability, and mutual development in the region.”

The name change has proven to be a difficult compromise for both countries to accept. The name dispute soured relations between Greece and Macedonia since Macedonia’s independence in 1991. Many Greeks reject the use of “Macedonia” by their northern neighbor, as they argue the northern Greek provinces of Macedonia make up all of the ancient namesake kingdom and worry that Skopje could have designs on acquiring Greek territory labelled as Macedonian. Greece has previously blocked its EU partners from recognizing the name Macedonia, using the moniker “the Former Yugoslav Republic of Macedonia” (FYROM) instead.

Panos Kammenos, the founder of Tsipras’ coalition partner Independent Greeks, and Greece’s minister for national defense, resigned his post in protest of the deal on January 15. His departure triggered a no-confidence vote in the Greek government, which Tsipras survived on January 16.

The new name deal offers an enormous opportunity for Greece, however, according to Atlantic Council Executive Vice President Damon Wilson. The agreement, Wilson said, is “the best way to restore [the Greek city of] Thessaloniki as the gateway port to Southeast Europe, re-connecting it to historic hinterlands in the Western Balkans, and bolstering Greek economic and political weight in the region.”

Many Macedonians insisted that Macedonia is the only name they have ever known and resented the need to have another country approve of the name they use for themselves. While a September 30 referendum on the name deal was approved by a large margin, the vote was marred by low turnout, driven by an opposition boycott campaign. Despite the setback, Zaev secured the needed two-thirds majority parliamentary support for the name deal on January 11.

The name change now opens the door for Macedonian accession to NATO and potentially the EU. On July 11, 2018, NATO leaders formally invited Macedonia to begin the accession process, pending approval of the Prespa Agreement. Speaking to Wilson in Brussels immediately after the announcement, Zaev said the success of the agreement “showed to our neighbors and probably to the rest of the world, a role model for how that kind of sensitive question is even possible to solve.”

His countrymen, Zaev said, “believe so much in our integration in NATO and in parallel in the European Union, that we will have a new friend, our south neighbor, to cooperate together to preserve the future for citizens of both countries.”

According to Wilson, both countries must now work on “becoming great allies and partners, anchoring a democratic, free, and peaceful Southeast Europe fully within NATO and the EU.”