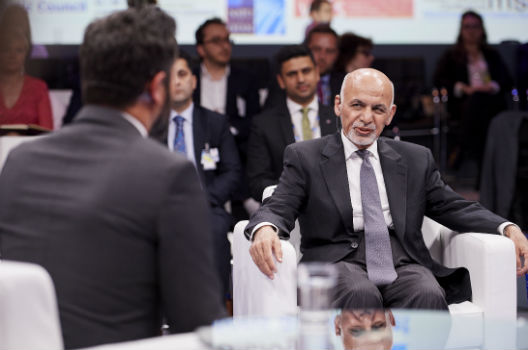 President of Afghanistan, Mohammed Ashraf Ghani Ahmadzai (right) speaks with Kevin Baron of Defense One (left seated) at the NATO Engages event in Brussels on July 12

Unlike in the past, there is now a “real” and “constructive” dialogue on bringing peace to Afghanistan and this effort is based in mutual trust, Afghan President Ashraf Ghani said in Brussels on July 12.

Ghani, speaking at the NATO Engages event co-hosted by the Atlantic Council, said US President Donald J. Trump told world leaders at the NATO Summit this week that the US strategy of a “conditions-based” commitment to Afghanistan was producing results.

Under Operation Resolute Support, NATO has trained and assisted Afghan security and military forces since 2015. On July 11, NATO allies reaffirmed this commitment by agreeing to provide financial support to the mission through 2024. Additionally, British Prime Minister Theresa May announced on July 12 that the United Kingdom would be sending 440 more non-combat personnel to Afghanistan in support of the mission.

NATO currently has nearly 16,000 troops in Afghanistan, 14,000 of which are Americans. Ghani is convinced that even as the Trump administration reviews the cost of drawing down US troops in other parts of the world, the US president will not abandon Afghanistan. “[Trump] has a style and you need to be able to make your case succinctly,” said Ghani. “And I’m proud to say that we have made our case succinctly.”

Further, Ghani added, “this strategy on Afghanistan has been thoroughly prepared.”

Ghani addressed skepticism about his positive take on the situation in Afghanistan, which has been ravaged by conflict for decades—well before a US-led coalition invaded in the aftermath of the terrorist attacks on the United States on September 11, 2001. On July 12, the Taliban stormed a key military base in northeastern Afghanistan killing at least thirty Afghan soldiers.

The Afghan president contended that as NATO troops have been drawn down Afghan security forces had stepped in to prevent a security vacuum from being left behind. “Journalists look for events, I look for patterns. People who look for events have always gotten the situation wrong,” said Ghani. “A sense of perspective is really important to see where we began and where we are going,” he added.

Citing the progress Afghanistan has made on his watch, Ghani said his country today is deeply engaged with Central Asia, a region with which it is setting historic trade records.

He contended that Afghanistan is not alone in facing security challenges. “There is uncertainty about global security—Belgium, Germany, France, UK. It is no longer [just] Afghanistan,” he said, adding that “the phenomena of transnational terrorism… is a network phenomenon.”

In June, the Afghan government declared a unilateral ceasefire in its war on the Taliban. That ceasefire overlapped with the Taliban’s three-day Eid truce giving Afghanistan three days of unprecedented peace. Ghani called off the government ceasefire after eighteen days when the Taliban resumed its offensive.

Nevertheless, Ghani continues to hold firm to the belief that a political solution with the Taliban is vital in order to bring peace to his country. The Taliban, however, has rebuffed his overtures demanding instead to sit down with the United States.

Adding to the challenges facing Afghanistan, the Islamic State of Iraq and al-Sham (ISIS or Daesh) has sought to put down roots and competes with the Taliban for territory. “The threat of Daesh is another order of threat than the one that al Qaeda was,” said Ghani. The US-led coalition invaded Afghanistan after its Taliban leaders at the time refused to hand over al Qaeda leader Osama bin Laden whose group carried out the 9/11 attacks. “Our misfortune is that [Daesh] look at us as territory, ecology, a set of opportunities,” said Ghani.

The situation in Afghanistan is not helped by its neighbors either—particularly Pakistan.

Pakistan’s support for terrorist networks—in the form of weapons, intelligence, and safe havens—that fight inside Afghanistan has been a longstanding obstacle to peace.

In its statement, NATO called on Pakistan, Iran, and Russia to “contribute to regional stability by fully supporting an Afghan-led and Afghan-owned peace process.”

Atlantic Council President and Chief Executive Officer Frederick Kempe asked Ghani about Afghanistan’s relationships with its neighbors as it tries to build peace.

“In the region a consensus is emerging,” Ghani said, noting that India and China have agreed to cooperate on the question of Afghanistan, and Afghanistan has made some progress with Pakistan. “On paper, we have had very significant movement with Pakistan,” the Afghan leader said, while expressing the hope that this will translate into action. “Our relation with Pakistan has to become three dimensional, it has been unidimensional. Everything has been shadowed by their relationship with the Taliban.”

Despite these challenges, Ghani remains optimistic. “The finishing line is going to be full of hurdles, but the direction has been set,” he said.

Asked about the role of women in the peace process, Ghani noted that they are part of the High Peace Council. “Afghan society has a consensus on making peace, it does not have a consensus on the price to be paid for peace,” he said, addressing concerns that women are being left out of the process and that this could cost them their hard-fought rights. “Women are always on top of the agenda,” he said.