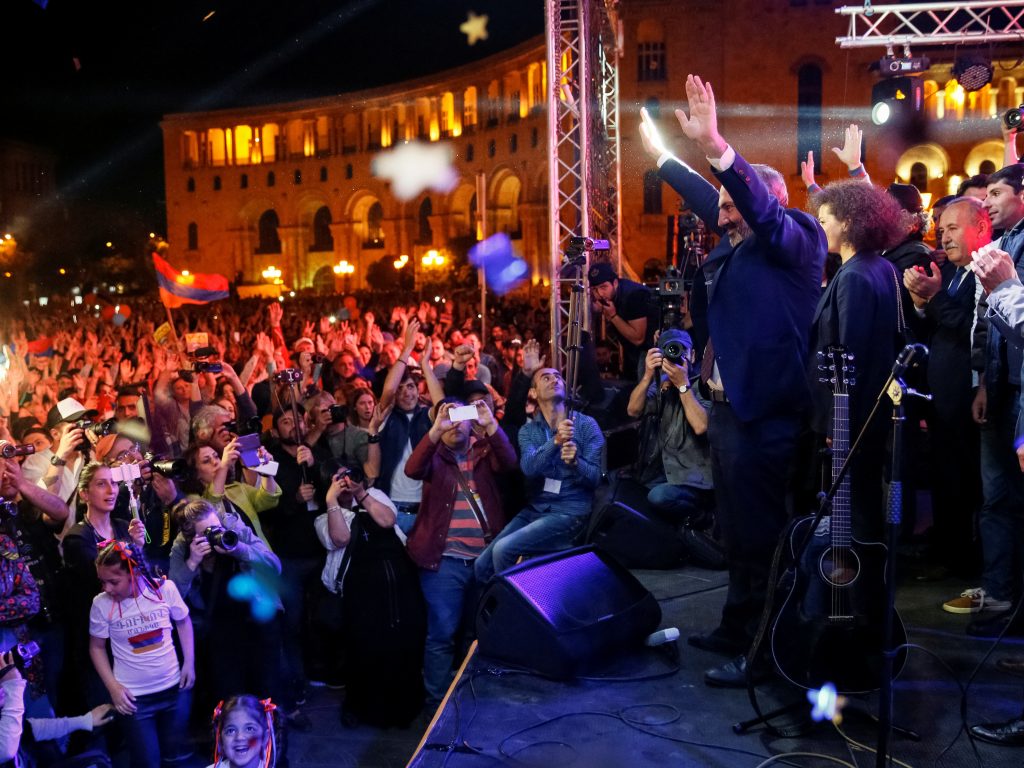 Armenian opposition leader Nikol Pashinyan waves to his supporters at a rally after his bid to be interim prime minister was blocked by the parliament in Yerevan, Armenia May 1, 2018. (REUTERS/Gleb Garanich)

Armenia’s ongoing political drama intensified in mid-May when Prime Minister Nikol Pashinyan, reacting to a court’s decision to release former president Robert Kocharyan while he awaits trial on charges related to the government’s crackdown on protesters in 2008, called on his supporters to blockade the country’s courthouses to begin the “second phase” of the Velvet Revolution. On June 5, Pashinyan announced his plan to create a unified anti-corruption court with the aim of cleansing Armenia’s judicial system of corruption.

These developments underscore Pashinyan’s efforts to legitimize himself and his ruling coalition’s post-revolution vision for Armenia. To do so, Pashinyan and his government will need to pursue the key reforms he promised while leading the mass protest movement that deposed the former government and elevated him to Armenia’s premiership in April 2018.

Meaningfully tackling corruption is paramount among those reforms. The fate of Ukraine’s former president Petro Poroshenko, another post-revolutionary leader in a former Soviet state, should illustrate for Pashinyan the perils of failing to keep promises to combat judicial corruption.  Poroshenko was soundly defeated by comedian Volodymyr Zelenskyy, a political newcomer, in Ukraine’s runoff presidential election in April. To ensure his own political survival, Pashinyan needs to prove himself as a consistent and tireless driver of reform in Yerevan and beyond.

Like Ukrainians, Armenians have for decades suffered from the consequences of widespread and mostly unchecked corruption. According to John Heffern, a former US ambassador to Armenia and a distinguished fellow for diplomacy and social entrepreneurship at Georgetown University, “the corruption problem has been a drag on Armenia’s development and a source of discontent among the Armenian people.” Armenia only scored thirty-five out of 100 on Transparency International’s 2018 Corruption Perceptions Index (CPI), with zero being highly corrupt and 100 being clean.

Pashinyan capitalized on his predecessors’ inaction and the anguish generated by decades of corruption and economic stagnation to fuel his political ascendance in Yerevan last year. Like Poroshenko, Pashinyan reached out to disaffected Armenians by promising a break with the status quo. His new Armenia would be free of oligarchic control over political and economic opportunities. Politics would be done as never before, with competitive, transparent democratic elections and robust citizen participation in political discourse.

A little over a year after the Velvet Revolution, most observers seem to agree that Pashinyan and his government have thus far kept the promises of their campaign and remain sincere about plans to eradicate corruption. The government has criminalized illicit enrichment and in the summer of 2018 began an unprecedented anti-corruption campaign against businessmen linked to the former regime. Pashinyan’s confidence in his government’s progress was made clear when he declared in November of last year that “there are no oligarchs in Armenia anymore.”

Furthermore, and critically, Pashinyan has the domestic support and momentum to follow through on the progress made so far in reshaping Armenia’s political system. Snap elections in December of last year gave him and his party a formidable mandate in Yerevan. His widespread popularity has persisted, with the most recent polls reporting an 81.6 percent approval rating for Pashinyan and 75.8 percent of respondents listing anti-corruption efforts as the government’s greatest achievement of the past year. Heffern, the former US ambassador, hopes that Pashinyan and his government will continue these efforts aggressively and fairly.

But it is still early in Pashinyan’s term. During his 2014 election campaign, Poroshenko talked big on fighting corruption. He promised to cleanse Kyiv and critical sectors of the country’s flagging economy of oligarchic influence. Ukrainians responded positively to this and Poroshenko’s other promises, such as advancing Ukraine’s EU aspirations and repulsing Russian aggression in eastern Ukraine, by awarding him a clinching 56 percent of the vote in 2014.

However, truly disassembling a politico-economic system built on corruption, which requires moving beyond partially fulfilled campaign pledges and weakly implemented anti-corruption laws, requires immense political will. According to John Herbst, a former US ambassador to Ukraine and director of the Atlantic Council’s Eurasia Center, Poroshenko did move the needle on corruption, particularly in the gas, banking, and government procurement sectors. But in the areas where he commanded the greatest influence as president, namely the country’s courts and its prosecutorial system, the former Ukrainian president did little.

The consequences of Poroshenko’s inaction were dramatic. His approval rating dipped from nearly 50 percent in the summer of 2014 to just 17 percent at the end of 2015, with a dismal 5 percent of Ukrainians saying the president was doing enough to fight corruption. When Poroshenko ran as the incumbent in Ukraine’s recent presidential election, the glaring lack of meaningful change in the country vis-à-vis corruption cost him dearly. Despite his achievements in other domestic arenas, such as in stemming Russia’s advance in eastern Ukraine or securing the autonomy of the Ukrainian Orthodox Church, his electoral thrashing by the political neophyte Zelenskyy affirmed that failing to purge Ukraine of corruption was politically fatal.

Of course, Pashinyan is not Poroshenko. The former is a journalist turned revolutionary who spent time in prison after incurring the ire of the former regime; the latter is a career politician with a multibillion-dollar confectionary business who maintained connections to Ukraine’s most infamous oligarchs and the system they ran. But both rose to power by promising to overhaul the wildly corrupt political systems they inherited and to deliver a fairer and more transparent politics to their corruption-fatigued populations.

As such, Poroshenko’s political defeat should serve as a cautionary tale for Pashinyan and his government. Armenians took to the streets in 2018 to dismantle the old system and usher in an era of political, economic, and societal transformation, as their Ukrainian counterparts did four years earlier. If Pashinyan proves his initial steps are part of a committed and long-term effort to finally destroy corruption’s hold on Armenia, he, his government, and the Armenian people will reap the rewards of a new and hopeful status quo. However, if the obstacles prove too great or the urgency for swift reform unconvincing, Pashinyan may face the same fate as Poroshenko when Armenians head to the polls in 2023.

Colby Galliher is a program assistant with the Atlantic Council’s Eurasia Center. You can follow the Center’s work @ACEurasia.