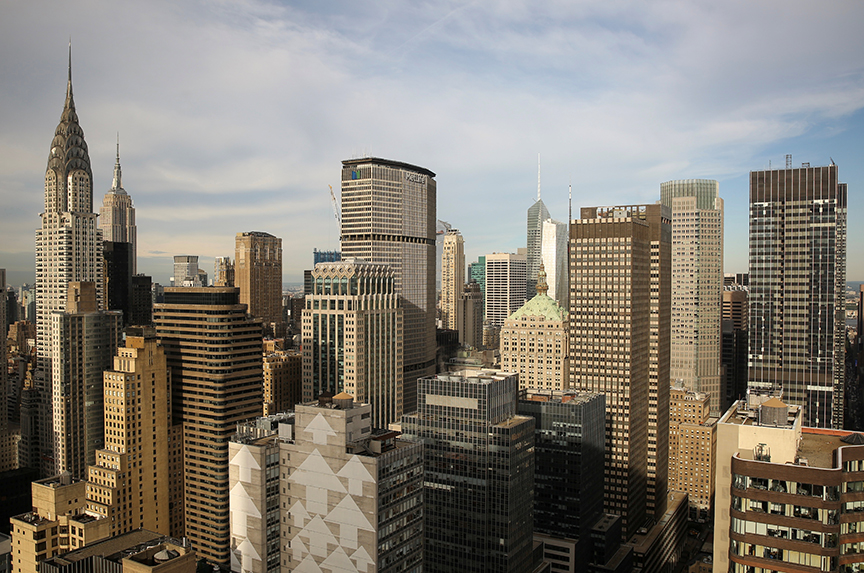 Luxury real estate markets, such as Manhattan, are particularly common destinations for oligarchs to hide their ill-gotten fortunes. (Reuters/Amr Alfiky)

On December 8, 1941, the day after the attack on Pearl Harbor, the US Congress declared war on Japan. Two weeks after al Qaeda attacked the United States on September 11, 2001, the CIA was on the ground in Afghanistan.

The Russian attack on US democracy in 2016 was not deadly, but it was similarly harmful to US national security. The West, however, has still not pushed back strongly enough to stop the hybrid war Moscow continues to wage against the United States and its European allies.

A simple, low-cost, and powerful step would be to outlaw anonymous shell companies that Kremlin cronies use to secretly stash dirty money in the United States. As a result of the House of Representatives turning over to Democratic control and ongoing bipartisan negotiations in the Senate, anti-money-laundering legislation stands a decent chance of passing through a divided Congress this year. This legislation should be highly prioritized and comprehensively packaged for the sake of national security.

As background, the United States is the world’s second-biggest secret haven for illicit financial flows. Russia’s kleptocracy lacks independent law enforcement and allows oligarchs to amass vast wealth from corruption that risks being confiscated if they ever fall out of favor with the Kremlin. Thus, the safest place for these oligarchs to hide their ill-gotten fortunes is in countries like the United States, attractive with their anonymous shell companies, enforceable property rights, and deep asset markets. Luxury real estate markets, such as Manhattan and Miami, are particularly common destinations.

US and international financial crime authorities have long urged the US Congress to ban anonymous companies by forcing firms to disclose during the incorporation process the identities of their “beneficial owners” (i.e. the person who enjoys the benefits of ownership, even if the legal title belongs to another entity such as a shell company held by the beneficial owner to hide his money). But such recommendations have failed to overcome ideological protestations from Republican lawmakers about privacy infringement and regulatory burden.

The Russian attack on the 2016 election broadened the nature of the threat from an esoteric need to police the financial system to a top national security priority, for two reasons.

First, rather than idling harmlessly in the financial system, foreign dark money now gets weaponized. The Kremlin can enlist oligarchs to fund hybrid warfare against Western democracies, from corrupting and cultivating politicians and businessmen, to financing favored electoral campaigns, to paying for the services of hackers, trolls, lawyers, lobbyists, and mercenaries.

Second, Moscow’s escalating aggression must be met with the United States’ own short-of-war countermeasures, the most promising of which is finding and freezing Russian money hidden in the country. Sanctions targeting the Kremlin’s stolen wealth, such as the Magnitsky Act, have elicited more intense anger from Russian President Vladimir Putin than broader sectoral sanctions that constrain the Russian economy. This reaction indicates how worried Putin is about protecting offshore Russian money, suggesting this is an asymmetric vulnerability for him and an opportunity for the West.

Seeing the writing on the wall, the coalition that favors federal beneficial ownership legislation has broadened over the past two years and now includes the banking sector and the State of Delaware (despite the fact that Delaware is the leading provider of anonymous shell companies).

Unfortunately, ideological gridlock has prevented Congress from keeping up with this shifting consensus. In fact, House Republicans tried to move in the opposite direction last year, rejecting Democrats’ beneficial ownership proposals and instead looking to ease the regulatory burden facing banks by reducing the amount of suspicious activity reports they share with the government (an idea that law enforcement agencies warn against).

While beneficial ownership should be the centerpiece of a legislative package, this should also be an opportunity to enact at least four other important reforms to enhance financial transparency and strengthen US regulatory, enforcement, and intelligence agencies.

First, make US nonprofit organizations, such as the National Rifle Association, publicly disclose their acceptance and use of foreign money. This is similar to requirements imposed upon campaigns and super PACs. The Trump administration is moving in the opposite direction, no longer requiring nonprofits to disclose their donors to the Internal Revenue Service.

Second, enhance disclosure requirements around high-value property transactions, including by repealing the real estate industry’s exemption from the Patriot Act and prohibiting all-cash deals above certain thresholds. These are loopholes exploited by foreigners to funnel laundered money to US political interests by paying above-market prices.

Fourth, give the Financial Crimes Enforcement Network (FinCEN) within the US Treasury Department more resources to collate beneficial ownership data and to carry out examinations together with other regulators, more authority to direct examination and enforcement priorities, more guidance to prioritize tracking the dirty money of Russian oligarchs (whereas they traditionally focus mostly on countering terrorist financing and money laundering), and more reporting obligations back to Congress to ensure accountability.

The last time Congress enacted such bold reforms to the Bank Secrecy Act was the month after 9/11, when counterterrorism priorities were added to the international anti-money laundering system. This time around, it should not have taken more than two years to similarly defend ourselves against the danger of Russian financial warfare. But democracies draw strength from their ability to reorganize against emerging threats, even if Winston Churchill was correct that Americans only do the right thing after trying everything else. The time has come to do the right thing and use financial transparency legislation to crack down on dark Russian money.

Josh Rudolph is a nonresident senior fellow with the Atlantic Council’s Global Business and Economics Program. He formerly served at the International Monetary Fund, the National Security Council, the US Treasury, and J.P. Morgan. Follow him on Twitter @JoshRudes.