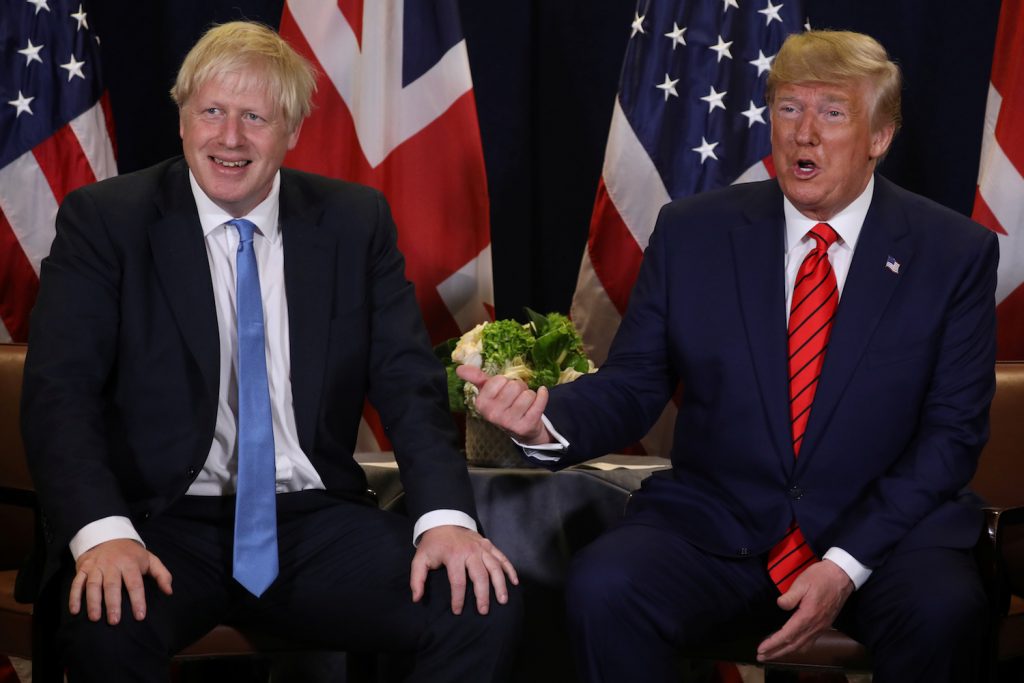 There is a natural affinity, even similarity, between the president of the United States and the prime minister of the United Kingdom. Both are privileged elites who have nonetheless branded themselves as men of the people, men who understand the needs and anger of those who feel left behind by politics as usual.

Trump tweeted his congratulations to Boris Johnson even as results came in on Thursday evening, saying the prime minister’s victory offered the prospect of a massive new trade deal with the UK—one that could be “more lucrative than any deal that could be made” with the EU. That’s debatable, since a comprehensive agreement would take years to negotiate and run up against some genuinely difficult issues like agriculture, public procurement, and financial services. It may also have to wait until the UK has sorted out its future trading relationship with the EU.  But it is a statement of intent that will be welcome at 10 Downing Street. Expect Johnson to make an early, high-level visit to Washington.

Since the June 2016 Brexit referendum, the UK has had little capacity or inclination to play an active role in foreign policy. Johnson’s instinct, like that of Theresa May before him, has been to align himself closely with the White House. The two countries have differed on some issues, including Trump’s decisions to tear up the Iran nuclear deal and move the US embassy in Israel to Jerusalem. But the UK did not challenge US criticisms of NATO and the EU; on Iran policy more generally; on Yemen, Palestine, Saudi Arabia, or North Korea. Even when it comes to the extraterritorial application of US sanctions, it has tended to follow US wishes.

Looking ahead, China may be more problematic. The UK is keen to further develop commercial relations as part of its post-Brexit “Global Britain” initiative, but it has joined the US and others in condemning China’s treatment of its Uighur minority. Johnson has also said he will not allow Huawei, the Chinese telecoms giant, to have any role in building the UK’s next-generation telecoms infrastructure that could threaten intelligence sharing between the UK and its Five Eyes partners.

Johnson has spoken of reinvigorating UK diplomacy and there is talk of once again putting the well-funded department for international development under control of the Foreign and Commonwealth Office. But as the UK continues to focus on completing Brexit and developing new trading links with the rest of the world, Washington and London will likely continue to look for ways to stay aligned.

Peter Westmacott is a distinguished ambassadorial fellow with the Atlantic Council’s Future Europe Initiative. He is a former British ambassador to the United States.