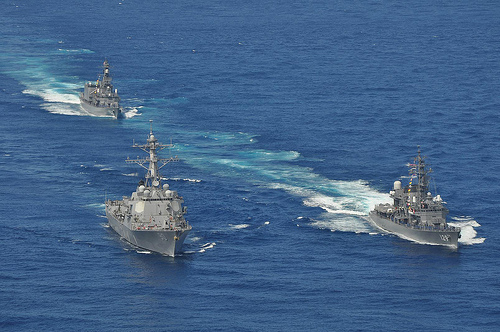 For all of its economic dynamism, the regional stability of the Asia-Pacific is increasingly threatened by conflicting claims over small rocks and archipelagos in the South China Sea. However trivial these disputes may appear, a breakout into physical conflict would have massive ramifications for the US economy, as each year 1.2 trillion dollars in US trade traverses the Sea.

While it is clear that the United States has a vested interest in the peaceful resolution of these disputes, it is uncertain whether the current strategy of increased US forces in the region will do anything but exacerbate tensions and suspicions. In contrast to a military “pivot,” economic and diplomatic programs that provide mutually beneficial incentives—such as joint resource development, trade agreements, and strengthened multilateral architecture—are a much more effective strategy to manage and mitigate mounting tension in the region.

A marked escalation of hostility across the Asia-Pacific took place in 2012. In June, disputes over the Scarborough Shoal between China and the Philippines led to a two month standoff that was only ended by the arrival of typhoon season. More recently, China’s Hainan province declared its authority to board and search ships within the immediate area of the disputed islands. India has even joined the fray, as its Naval Chief DK Joshi announced it will defend its interests in the South China Sea, which include joint exploration ventures with Vietnam, if necessary.

This rise in animosities has coincided with the United States’ announcement that 60 percent of its naval vessels would be stationed in the Asia-Pacific by 2020. Whatever the intentions of this announcement, it is bound to undermine prospects for peace in a region where military budgets are already increasing across the board. The security-centric pivot has only served to increase Chinese suspicion and assertiveness, whilst creating a volatile web of entangling alliances that will embolden smaller nations to take reckless actions.

Furthermore, it is highly doubtful that a US military with shrinking budgets and reduced ambitions will be able to successfully project a posture of dissuasion in a distant region ripe with rapidly modernizing militaries. Alternatively, the US should utilize its diplomatic capital to facilitate economic partnership and institutional capacity building, as a means to defuse tensions.

This strategy would entail multiple dimensions.

First, US officials should work towards including ASEAN members in the Trans-Pacific Partnership, a proposed trade agreement that will reduce trade and investment barriers in the region.

Second, US officials should promote the discussion of joint development of resources, particularly in the South China Sea. Precedent for this arrangement can be found in the Malaysia-Thailand joint development area, of which 8.5 trillion cubic tons of natural gas have been extracted since 1990, even as both countries still have formally disputed claims over the territory.

Third, the United States should advocate the strengthening of ASEAN’s formal mechanisms to resolve conflicts in a peaceful manner, including the transformation of ASEAN’s 2002 code of conduct in the South China Sea from a declaration to a legal code.

Stability in the Asia-Pacific is essential to the growth of a global economy that continually appears on the verge of reentering recession. In the South China Sea, laying the foundations for economic integration in the present will provide for continued economic dynamism that may preclude the propensity for conflict in the future. The Obama administration would be wise to utilize deft diplomacy composed of positive incentives instead of brute force and zero sum containment policies.

Philip Haxel was an intern for the Atlantic Council’s Asia Security Initiative under the Brent Scowcroft Center on International Security.