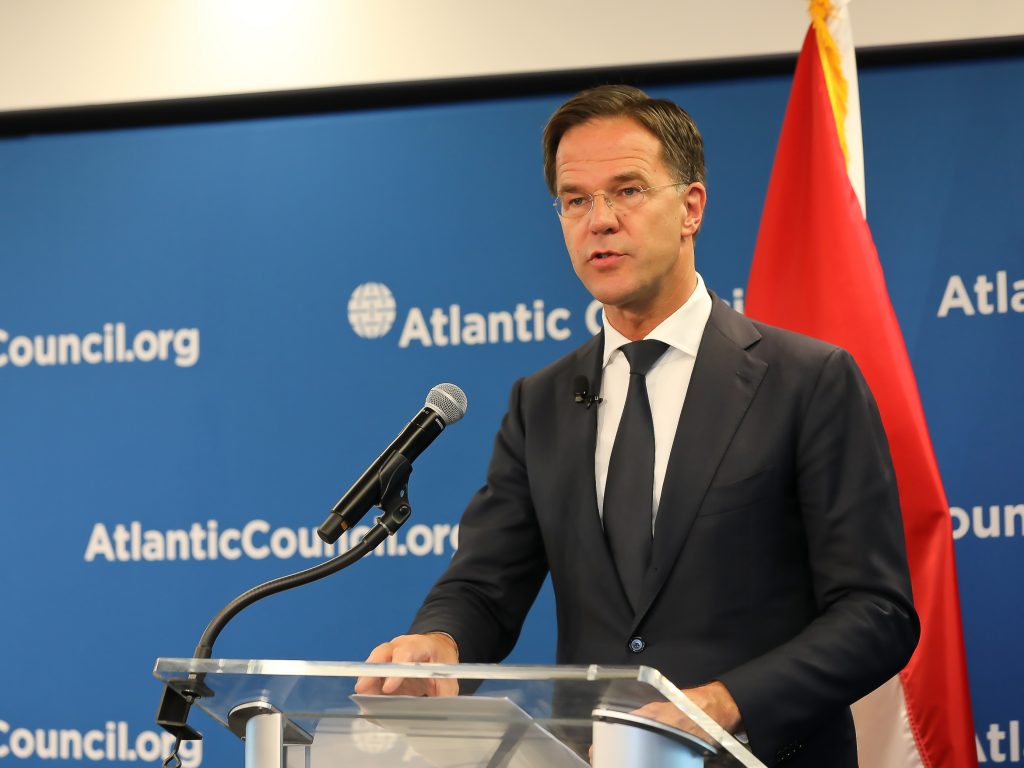 Mark Rutte, prime minister of the Netherlands, speaks at the Atlantic Council on July 18, 2019. (Tony Powell)

While many European leaders have pushed back against US President Donald J. Trump’s criticism of multilateral organizations such as the United Nations (UN), World Trade Organization (WTO), and even the European Union itself, Dutch Prime Minister Mark Rutte wants his colleagues to look at Trump’s rhetoric as an opportunity. “We have to make use of Trump’s criticism of these organizations to start to improve them. It is a much more constructive [approach],” he advised.

Speaking at the Atlantic Council on July 18, the Dutch prime minister said that the United States “is right to question whether the [multilateral] system still serves its own interests. And it’s not alone. In Europe, too, we have long been pressing for improvements to multilateral partnerships.”

The WTO has drawn the most attention from the Trump administration, which has blocked the appointment of new judges to the organization’s appellate body in protest over the way disputes are handled—a process it sees as biased against Washington. US officials are also frustrated over WTO rules that allow countries to self-identify as “developing countries” for special privileges, allowing economic heavyweights such as India and China to be classified developing countries. In August 2018, Trump suggested such concerns might lead the United States to pull out of the organization.

Rutte agrees that “there are many things which are not working” in the WTO. When the organization was created, the Dutch prime minister explained, “there were clear boundaries between the first world and the third world,” and “rules [were] aimed at more equal distribution of wealth between the rich and the poor.” But now that many of these countries—such as China—have caught up economically with the United States and Europe, “the underlying system has not adequately evolved with it,” Rutte admitted.

The Trump administration has also levied complaints over the functioning of the UN, which led to a June 2018 decision to withdraw from the United Nations Human Rights Council due to the alleged “chronic bias against Israel” in the body. In his remarks to the United Nations Security Council in September 2017, Trump said that the United States would “encourage all member states to look at ways to take bold stands at the United Nations with an eye toward changing business as usual.” While Europe disagrees with the withdrawal of the United States from the Human Rights Council, it does share Trump’s desire to shake things up, Rutte explained. “It’s no accident that a big focus of the Netherlands’ recent presidency of the UN Security Council was on reforms within the UN system,” he noted.

Rather than worrying about the criticisms coming from the White House, Rutte implored European leaders to “use the momentum created by this critical approach of the current US administration. Let’s press forward. Let’s work together to bring real change in the organizations that really matter.” Rutte suggested that if Europe meaningfully engages with the United States on reform, it can provide a check on the Trump administration’s impulses to withdraw by showing that the proper course is not “renouncing or dissolving the multilateral system altogether because it doesn’t work properly, but by improving it and making it fit for purpose once again.”

Europe is the Right Partner

The United States should embrace Europe’s drive to reform the multilateral economic and political system, Rutte argued, because of the power of the transatlantic bond and the values each side of the Atlantic share. Like the United States, Europe believes “that international trade, economic cooperation, and shared know-how are essential, not only for prosperity but also for our common security and our common stability. There can be no doubt that strong, entrepreneurial, and innovative economies make better countries to live in.”

While “China under President Xi [Jinping] is more active, self-assured, and vocal than ever before,” Rutte noted, “its outlook on trade relations and the rule of law is fundamentally different from ours,” making it important that Europe and the United States combine their strength to counter competition from Beijing. As Trump attempts to push back against China’s support for state-owned enterprises, unfair industrial subsidies, and theft of intellectual property, Rutte argued, Washington’s hand would be strengthened with a united Europe behind it.” Each year a staggering 1.3 trillion dollars’ worth of trade changes hands across the Atlantic,” Rutte highlighted, making a combined transatlantic community the strongest economic actor in the world.

The key to harnessing this power, he said, will be in resolving the lingering trade disputes over aluminum and steel tariffs, potential car tariffs, and US and European subsidies to companies like Airbus and Boeing. “We should solve [these],” Rutte argued, “because collectively—transatlantically—we are much stronger in then pivoting to other parts of the world than when the United States is doing that alone.”

With trade talks between US Trade Representative Robert Lighthizer and European Commissioner for Trade Cecilia Malmström stalling over disagreements about the scope of a potential free trade deal, Rutte suggested the two sides stick to common ground, focusing on the limited areas to which Trump and European Commission President Jean-Claude Juncker already agreed in their July 2018 meeting, such as increased EU purchases of liquefied natural gas and soybeans and removal of subsidies on non-automobile industrial goods.

Rutte also acknowledged that Trump’s criticism of European NATO members for not spending enough on their own defense will need to be more thoroughly addressed. He noted that “this is a work in progress,” and in his country “we are not there yet, but I’m glad to say that step-by-step the number is increasing.”

Rutte’s passionate defense of the transatlantic bond and optimism about the ability for both sides of the Atlantic to work together is part of the reason why the Atlantic Council will be honoring Rutte with its Global Citizen Award in September, Atlantic Council President and CEO Frederick Kempe announced on July 18. “As someone who has led his country and guided the European Union through turbulent times, I can think of few leaders with the experience, the authority, and the clarity of vision that [Rutte] possesses,” Kempe said.

Despite the disagreements, the United States and Europe need to work together to secure a better world Rutte advised, because “it’s crucial that we keep the transatlantic bond strong and vibrant. We don’t have to agree on everything to see that we’re stronger together than we are apart.”