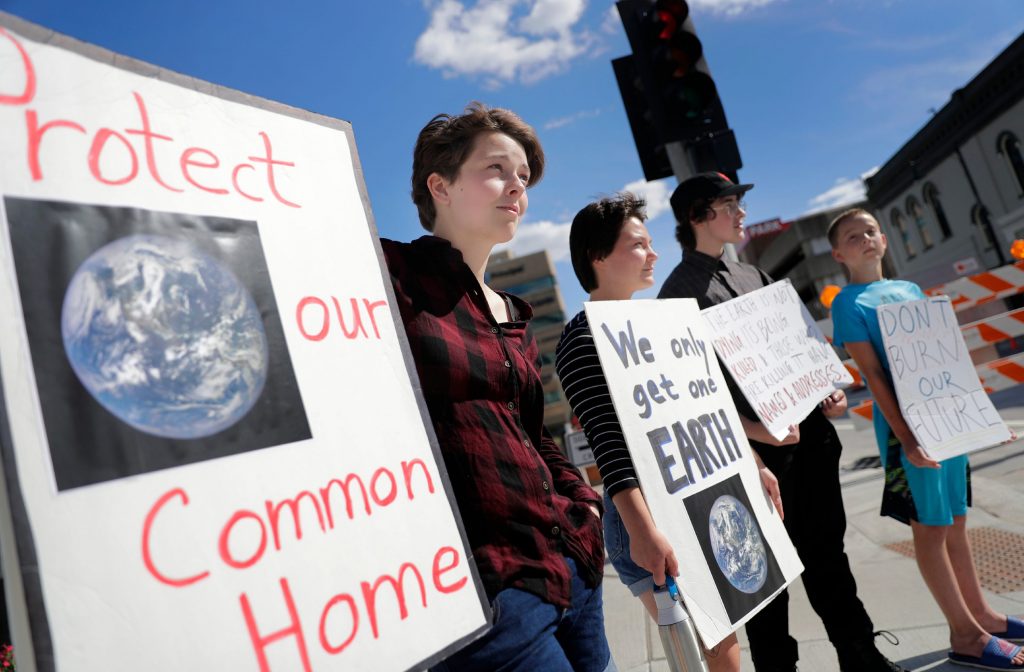 Ten of the top Democratic presidential candidates took turns outlining their plans to address climate change during a seven-hour-long town hall hosted by CNN on September 4.

During the town hall, more than half of the candidates expressed approval for the use of a tax on carbon dioxide pollution and nearly all of them explicitly supported rejoining the Paris Climate Accord, which US President Donald J. Trump withdrew the United States from in June 2017.

Explaining his support for a “carbon tax,” Buttigieg admitted that “you’re not supposed to use the T-word when you’re in politics. But we might as well call this what it is.”

Warren promised to target three industries which she argues make up “70 percent of the pollution” in the air: construction, electric power, and oil. She suggested that these companies may need to be told “sorry guys, by 2035 you’re done, you’re not going to be using carbon-based fuels anymore.”

Biden argued that the next president needs to focus on rallying the international community around tangible climate action by taking some tangible steps domestically, especially after Trump’s withdrawal from the Paris accord. “You can’t very well preach to the choir if you can’t sing,” Biden said.

What united all of the candidates was a recognition that climate change would need to be a major focus of the next president. Sanders said that the world is “dealing with what the scientists call an existential threat to this planet, and we must respond aggressively, we must listen to the scientists.” Booker agreed, saying that “everything I do will be done through a green lens and the urgency of climate change.”

Atlantic Council experts react to the Democratic climate change town hall and what it means for national and international climate action:

“Despite differences in approach and policy specifics, what became even more clear in the first of two Democratic presidential candidate climate town halls last night is that, if any Democrat is elected in 2020, he or she will attempt to remake the US economy and energy system at a level commensurate with the potential impacts on the planet and society of extreme climate change. Even Joe Biden’s ‘moderate’ plan to achieve net-zero emissions by 2050 is hugely ambitious.

However, it is an open question if any one of these plans will be successful —it only requires looking back to the 2009-2010 Obamacare debate to see how a minority in Congress can water down major structural change—but if it were, it would reorder the US economy at a level not seen since the New Deal or at least the Republican-led deregulatory efforts of the past three decades.

“Of course, the devil is in the details and striking a balance between the need for government intervention and the need for private sector innovation is absolutely critical. This is where candidates such as Pete Buttigieg, who noted both the crucial role of government in setting ambition and policy while letting innovators come up with the best, most economical solutions stood in marked contrast to more top-down, technology-specific approaches from Bernie Sanders and others.

“Concerning, though, was the lack of focus on the international side of climate action. While Elizabeth Warren noted that the United States only produces 20 percent of emissions and supported border carbon adjustments—which will help reshape global energy systems but surely not solve the entire problem—only Joe Biden leaned heavily on the need for international cooperation to the enormity of the issue. Of course, if we are to solve the global climate challenge, US leadership is necessary and must begin at home. But if the United States does not turn this leadership into global action—recognizing that in much of the developing world, energy access, energy security, price, and air quality are much more pressing concerns than climate change—the United States risks becoming a climate leader without many followers.

“In practical terms, this means that the United States probably needs to offer a suite of technological solutions that address all of these challenges, not just climate change. This likely has to include nuclear, gas, and carbon capture technologies, with financing to support them in order to discourage countries from continuing to deploy cheap coal. Climate action requires government, as Buttigieg noted, but it also requires global governance and a level of practical, international ambition that is missing from most of the Democrat’s plans.”

“The climate town hall was unprecedented. Seven hours of dedicated discussion on the climate challenge with the major Democratic presidential contenders revealed much about their climate narrative, their proposed solutions, and the future direction of the Democratic party with respect to this era-defining issue.

“Climate was not discussed as just another single policy area—it cut across multiple, traditionally-siloed policy domains. The town hall touched upon climate’s relevance to agriculture, immigration, social mobility, and trade. And many of the candidates—most notably Booker, Buttigieg, and Warren—have signaled that they would use US trade policy to advance climate goals in ways that could have major implications for climate progress and the shape of the global economy in the coming decades, particularly if ‘carbon border adjustments’ were to proliferate. This is worth keeping an eye on as the campaign evolves.

“Finally, perhaps the most important figure in last night’s town hall wasn’t even present: Jay Inslee, the governor of Washington. Though he has dropped out of the presidential race, Inslee did more than any other candidate to push climate prominently into the conversation, and to ensure that this climate town hall became a reality. He also laid out a comprehensive, thoughtful climate agenda. Almost all Democratic candidates have embraced at least some of his proposals, and Elizabeth Warren recently adopted his entire platform full-stop, with some additional features of her own design. That good ideas can migrate among big personalities is a welcome development for US climate policy discussions.”

“The town hall on climate change emphasized the extent to which a national conversation about climate policy faces major challenges. In the broadest terms, the public tends to overestimate the power of the executive branch to implement the types of sweeping policies that could mitigate the effects of climate change. More specifically, candidates, moderators, and the public have trouble discussing the tools and technologies used to mitigate climate change, while energy experts often struggle to communicate the relevance and implications of energy models and predictions. Finally, the town hall discussion often veered beyond climate change to environmental policy, showing how difficult it can be to agree on the scope and terms of what climate policy actually encompasses.

“Given these challenges, it was unsurprising (but still disappointing) to see several leading candidates get mired in the specifics of choosing technologies and overestimating executive powers, rather than focusing on sweeping policies (like putting a price on carbon) that actually have the potential to effect change. Most disappointing was Elizabeth Warren’s stance on nuclear energy, which went beyond Jay Inslee’s climate policies (which specify “clean” rather than “renewable” energy sources, thereby leaving the door open for nuclear power and other carbon-neutral technologies like carbon capture and storage) and also ran counter to her own previous support for nuclear power, a clean and reliable energy source.

“The Atlantic Council Task Force on US Nuclear Energy Leadership has argued that maintaining the current nuclear fleet and facilitating innovation in nuclear energy technologies are each integral to US national security and climate security. Furthermore, streamlined processes for permitting and siting new nuclear power plants have strong bipartisan support in both the House and the Senate. We can hope that the Democratic presidential candidates will speak to their colleagues on the Hill (some of whom, like Senator Cory Booker, support nuclear and are running for president) as they refine their views throughout the primary and general election campaigns. Finally, candidates should prioritize the overarching goal of striving for lowered carbon emissions through technology-neutral policies, rather than getting bogged down in specific areas where they may lack expertise.”

“In aggregate, the candidates raised various proposals, a selection of which could meet the minimum threshold for support from the progressive wing of the party, but also Democrats (and some moderate Republicans) whose jobs are tied to traditional energy development in states like Ohio, Pennsylvania, and New Mexico. Those policies are carbon neutrality before midcentury, broad-based investment in research and development, some form of carbon pricing, and deference to states, whose unique energy mixes require different pathways to carbon neutrality.

“The governing challenge will be to chart this pathway without causing economic dislocation which will undermine the whole effort, and many key details are yet to be explained. That pathway will have to acknowledge both the salience of domestic energy production for price stability, the importance of exports—especially liquified natural gas exports—in weaning the world’s largest emitters off of coal to lower and zero carbon fuels, and the wisdom of developing a newer, cheaper, and proliferation-resistant generation of nuclear power.”

“It’s a refreshing change. Climate change was almost completely sidelined in the 2016 election. That’s unlikely to happen going into the 2020 elections. Every leading Democratic presidential candidate isn’t just willing to talk climate policy, as they were in the 2016 Democratic primary, but each has also announced detailed plans.

“Better still, the consensus among policy experts is that, while no plan is perfect, they are all much more ambitious than any plan presented by past presidential candidates. Crucially, all candidates have embraced the target to hit net-zero emissions by 2050 if not sooner—which is a must if the world is to avoid catastrophic climate change. Whether or not voters will give climate change higher priority in the 2020 election, it’s clear that the Democratic candidates are ready to rise to the magnitude of the challenge that the climate crisis presents.”

“It’s amazing how far we’ve come in terms of climate as a central part of one party’s political calculus in a very short period of time. Candidates are now competing on climate—and that’s a very good thing.

“Climate change represents a massive economic opportunity. The moderators focused largely on the costs of candidates’ climate plans without recognizing the benefits that come from more aggressive action. The United States must lead the transition to a low-carbon economy, with innovation and new technologies, or risk being left behind by our competitors who are already sprinting ahead.”

“The oil and gas industry is on the defensive and fighting on terrain in Washington that it has never had to fight on before. The landscape is now dominated by climate and energy transition versus traditional concerns about energy security, affordability, and economic growth. Politically, the space to advocate for those traditional energy policy goals has never been more wide open for Republicans as Democrats tack leftwards.

“Yet the reverse is also true as the Democrats have the climate/sustainability space to themselves as well. With energy prices, particularly gasoline prices, low and not front of mind for voters, there could be a major opportunity here for Democrats to win over moderates for a more proactive approach on climate/sustainability. Unquestionably though the political and technological barriers to rapid decarbonization are far higher than reflected in last night’s debate.”