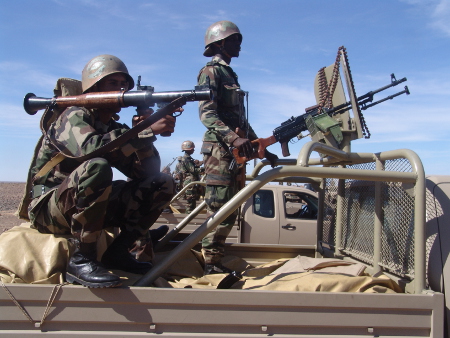 Over the past year, things have escalated dramatically in Mali, causing further instability in the Sahara and the Sahel. Many skeptics underestimated the Islamist threat and claimed that the Saharan branch of Al-Qaeda in the Magreb (AQIM) was only focused on kidnappings for ransom and illicit trade, rather than jihadist activities.

Now, Mali is faced with a new threat, suicide bombers—a phenomenon never seen before in the Sahel. In fact, since 9 February 2013, Mali has experienced twelve suicide attacks in the cities of Timbuktu, Gao, Kidal, Ménaka, and now Gossi. These are primarily areas that were once under Islamist control after the predominantly Tuareg National Movement for the Liberation of Azawad (MNLA) was elbowed out of Northern Mali last June by AQIM and its allies. This trend, which speaks to the inculcation of the insidious ideology, ethos and means of al-Qaeda’s global jihad, is not going to disappear anytime soon. I am concerned that, in time, AQIM’s influence and tactics will grow more sophisticated and violent in Mali, following a similar evolution seen in the Nigerian jihadist group Boko Haram from 2011 until present.

The root causes of the terrorist escalation in Mali and across the region are complex and multi-faceted. Understanding the “why” of this present violence and the logic of its perpetrators requires us to look more closely at some of the principal regional issues that contributed to the current crisis.

First, the situation in Northern Mali has recently escalated because jihadists across the region have become more proactive and lethal generally—a trend mirrored in Mali. Militants linked to al-Qaeda, hardened by years of survival under oppressive regimes, have been revived in this region since the start of the “Arab Spring.”

Seasoned fighters from Afghanistan, Algeria, Iraq, and Syria further bolster their skills and intent, helping them to expand their networks, strengthening their fighting capacity and resolve to recruit new militants. Terrorist training camps exist in several parts of the region, especially the Egyptian Sinai and Upper Egypt, southern and eastern Libya, northern Mali and northern Nigeria. Every state in this region is vulnerable to AQIM, which has been massively bolstered by weapons flow, porous borders and security vacuums in the Sahel, in combination with fragile regional governments.

The recruitment narrative of AQIM has also been given new life via Western intervention in Mali and a renewed, increasingly severe focus on Western (rather than Muslim government and civilian) targets. Beyond the recent In Amenas hostage disaster, the September 11, 2012, attack against the US Consulate in Benghazi exemplifies this pattern. Militants like Mokhtar Belmokhtar will also look increasingly to establish their bona fides and recruitment potential by striking accessible Western targets, including corporations with spectacular theatrical impact. Heavy-handed government responses to AQIM, as witnessed in Algeria, only raise the bar of lethality.

Another catalyst for violent extremism in Mali and the broader region is the confluence of marginalized peoples, pushed into harsh border areas, and violent extremist organizations. Militant Islamist elements like AQIM, Boko Haram, The Movement for Tawheed and Jihad in African (MUJAO), Ansar Dine, and others prove attractive to some within marginalized ethnic groups, coerced into veritable no-man’s lands, seeking social justice and political recognition.

Across the Sahel and Sahara, there are numerous examples of such marginalized peoples living in (predominantly post-independence) areas marked by weak governance, poverty, ethnic tensions and other insecurities that develop symbiotic relationships with extremists. This is the situation in Northern Mali and Niger with elements of the Tuareg ethnic group; the Toubous in southern Libya, northeastern Niger, and northern Chad; and the Sahraoui from Western Sahara. Nigeria, the most populated country on the African continent, is also mired in corruption, abusive security challenges and strife between the largely Muslim North and the predominantly Christian South. In each country, marginalized groups seek haven from oppressive regimes in neglected regions, while foreign militants are drawn to the same spaces to capitalize on the discontent. This creates a destabilizing conundrum that is playing out across the region.

A further reason for escalating destabilization in Mali is central government corruption. In Bamako (and elsewhere), the central government embezzled aid money destined for the North, leaving its inhabitants, the Tuareg, Songhai, Arabs, and others out to fend for themselves. Fifty-three years after independence and these resourceful peoples continue to be deprived of development, leaving the door open for extremist elements to exploit their grievances to generate recruits.

A severe cultural and ethnic divide between northern and southern Mali are the result of this central government corruption. From the perspective of many Tuareg (especially the older generation), before independence, their social and economic ties were historically with people of the North; decades post-independence, the Tuareg and Arabs still find it difficult to integrate with the South. Bamako elites jockeying for lucre and other civilians scrambling for scarce resources and sparse development money want to stigmatize “light-skinned” peoples as a means of excluding them economically and politically. These elites exclude whole populations based on arbitrary factors like skin color. This creates antagonism between pastoralists and agriculturalists, no matter where the Tuareg live.

The principal antagonists are some of the ethnic Bambara, who are largely in control of the government and benefit from the best salaried jobs, nepotism, cronyism, military positions, and major corruption. In order to make their government seem like a democracy and procure Western aid, they also support a few “clients” in a patron-client system.

A further reason for the violence has to do with the entrenchment of jihadists in Mali. When the (primarily Algerian) Salafist Group for Preaching and Combat (GSPC, the precursor to AQIM) first set foot in Northern Mali in 2003, it was careful to integrate itself into the local population. Extremists like Belmokhtar and Abdelhamid Abu Zeid (recently killed by French forces) married into local tribes, forging ties with and securing support from these communities, making it extremely difficult to extricate AQIM entirely. Clearly AQIM is not a creation of the “Arab Spring” or even a new threat. It is a terrorist group that traces its origins back to the Algerian civil war in the early 1990s. While the overthrow of Muammar Gaddafi from power did indeed allow AQIM in Mali access to more sophisticated weapons, its threat and presence in Mali pre-dated  Gaddafi’s fall by almost a decade.

AQIM has also been relatively successful in establishing itself in Mali beyond intermarriage because of its ability to seize opportunities—a theme promoted by al-Qaeda leader Ayman al-Zawahiri himself in a July 2007 message to the group. This opportunity came last year, when a confluence of factors—namely, the Malian rebellion, the fall of Gaddafi to the northeast and the presence of generally like-minded factions like MUJAO and Ansar Dine —coalesced to spark a jihadist insurgency that carved out a de facto “jihadist condominium” in Northern Mali. This “condominium” will, in theory, allow AQIM to “command the good and forbid the evil” on the ground (i.e. apply its understanding of shari’a law) to “reform” local tribes; manage the work of local jihadist partners, MUJAO and Ansar Dine; and develop a base to strike both near and far enemies—essentially, the pattern proposed by jihadi theorist Abu Bakr Naji in Management of Savagery.

Despite the French intervention in early 2013 designed to route AQIM, the former has most certainly not concluded its project in Mali. For the better part of a decade, proselytization, intermarriage, a variety of inducements, and alliances with tribes have left AQIM with many friends in northern Mali and the region. Evidence shows that even corrupt Malian officials have benefited financially from the jihadists’ presence, making it all the more difficult to root out the violent extremists.

Moreover, AQIM fighters have opted for tactical withdrawal, versus the supposed strategic defeat that some claim. Some militants clearly remain in the country, evidenced by the increase of suicide bombings, while others have merely taken refuge nearby in Libya’s south, Algeria, Sudan, Mauritania, and elsewhere. Once a strategic opening is perceived by AQIM’s leadership—and a new racial savagery wrought by Malian forces on the Tuareg, Arabs and Peul pushes them even closer to the ‘enemy of their enemies,’ the jihadists—re-infiltration and new ‘condominiums’ will be established.

In sum, while French, Chadian, and Malian efforts have in the main pushed AQIM and their allies out of Mali, the network remains resilient and has emerged less effective but more clandestine and dispersed. The Malian military itself has little support among Northern populations, which are needed to deny safe haven to AQ. This makes it exceedingly difficult to find and attack the jihadists without significant population support—a situation reminiscent of dislodging the Taliban from Afghanistan. Further, the withdrawal of a large portion of French combat forces will almost certainly exacerbate friction between secular rebels (MNLA) and the state, with the chance of any negotiated solution unlikely and escalation towards active future rebellion probable. This distracts both Mali and the MNLA from the fight against AQ, essentially creating the instability, time and space needed for the jihadists to reestablish a safe haven in Mali’s north.

Rudolph Atallah is a senior fellow with the Ansari Africa Center. This piece is an excerpt of Atallah’s full testimony before the House of Representatives Committee on Foreign Affairs on May 21, 2013. Photo credit: Flickr