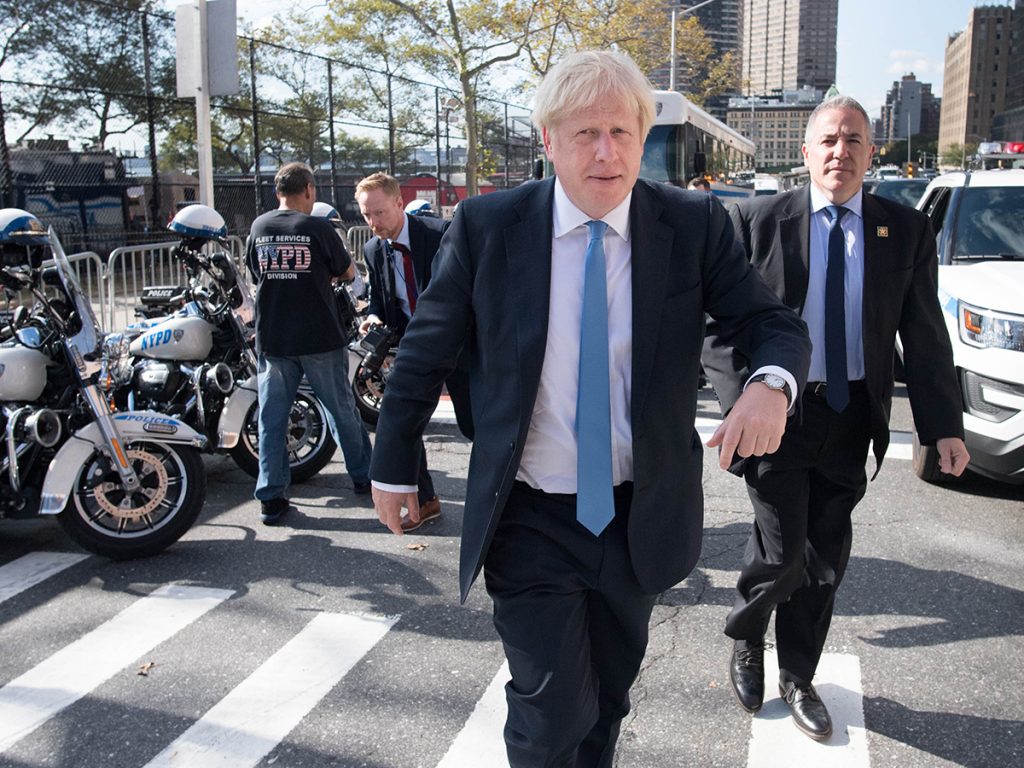 Prime Minister Boris Johnson arrives at the United Nations headquarters in New York where he is attending the 74th Session of the UN General Assembly.

The United Kingdom’s Supreme Court is less than ten years old. But its dismissal of a prime minister’s attempt to side-line Parliament when the United Kingdom is facing its most critical peacetime decision for seventy years shows it has already come of age.

The court’s ruling on September 24 that Prime Minister Boris Johnson’s request to the Queen to prorogue Parliament for five weeks was “unlawful” means Parliament will now reassemble to continue its seemingly endless debate on Britain’s planned exit from the European Union. However, it does not resolve any of the underlying issues confronting the Government—and, indeed the UK—over Brexit.

There is no precedent for what has just happened, which, in effect, adds a new clause to Britain’s unwritten constitution.

But Britain is no longer living in the fairy story of a New Elizabethan Age, the phrase used when Queen Elizabeth II ascended the throne sixty-seven years ago, but in a latter-day political horror story, played out against the fading and decrepit Gothic grandeur of the Houses of Parliament.

It has a government that cannot command a majority in the all-important House of Commons and an opposition that can cooperate sufficiently to prevent the prime minister taking Britain out of the European Union without an agreement but which cannot agree on what should be done with the prime minister, or what policy should be adopted with regard to Britain’s EU membership.

What will happen is that Parliament will reassemble on September 25, with MPs looking to see what the Government plans to do next—and to try to assess just what the public makes of it all.

It is probable that the Government will keep Parliament in session for at least a few weeks, during which it will face further scrutiny of its Brexit plans, notably its more recent statements—disputed by EU officials—that it is making progress in striking a revised deal to leave the EU on its promised date, October 31. A couple of weeks of activity may also ensure the resurrection of at least one piece of non-Brexit legislation that was cast aside with the initial, and now illegal, prorogation: a bill to give greater protection to prevent domestic abuse and protect its victims.

On Brexit, the Government will come under parliamentary pressure to disclose its plans for a Brexit deal, which it would be expected to present to the European Union’s leaders when they hold their next European Council meeting on October 17 and 18. Under a remarkable law drafted by the opposition and opposed by the Government, if no deal has been reached by October 19, the prime minister has to formally request an extension to the October 31 deadline to ensure the UK does not quit the EU without an agreement. There will also be challenges to Johnson’s continued tenure of the premiership, but divisions in the opposition, not least within the Labour Party, make it uncertain whether a formal no confidence motion will actually be tabled, or, if one is held, whether Johnson would actually be defeated.

And all the time MPs will be looking to see whether Boris Johnson will dare to call a general election before that date, or whether he really will focus on trying to get a deal with the EU and then calling an election as soon as possible afterwards.

Underlying all this will be uncertainty concerning public opinion. This now seems to be almost entirely focused on Brexit, so there’s an expectation that Brexiteers will generally condemn the Supreme Court ruling whilst Remainers—or those who favor a second referendum—will support it.

The Court had to consider an extraordinary issue and it appears that their unanimous ruling was correct in law, that they did not act in a political fashion, and that their judgement stemmed simply from the fact that Johnson broke one unwritten convention too many when he called for a five-week prorogation before the new parliamentary session would be called, instead of a more normal gap of a few days or a week or two.

But that probably misses the point. To those who want Britain to leave the EU—and particularly to those who think it doesn’t matter whether Britain leaves with or without a deal—the court’s action puts their objective in jeopardy and will likely serve to strengthen their support for the prime minister.

How this will play out is anyone’s guess. But the last few weeks have seen positions harden. Britain’s third and fourth parties, the Scottish Nationalists and the Liberal Democrats, openly espouse staying in the European Union. The biggest opposition party, Labour, has adopted an official policy of seeking a negotiated agreement to leave, putting this to a referendum with “Remain” on the ballot, and only then deciding whether or not to opt for its own deal or for Remain.

This somewhat peculiar wait-and-see policy is bitterly at odds with much of the party’s membership and grass roots activists, who briefly thought they had actually won a vote at the Labour Party conference on September 23 to support “Remain,” only to have what seemed to be an initial decision in their favor overruled by the chair in what appears to be a classic stitch-up by the party leadership.

But at some point, probably in late November or early December, a general election will finally be held. Judging by the admittedly fluctuating opinion polls, once again there will likely be no overall majority. So who knows now what will be the fate of either Brexit, or Boris Johnson?

After Brexit, will Scotland take the high road out of the UK?

Just two years after Scots narrowly rejected independence by referendum, a second bite at the apple―IndyRef2―is being widely discussed, and one recent opinion pollshows it leading to a pro-independence result.

Westminster tries to rein Johnson in and avoid no-deal

Arguing that the bill would mean he would lose all leverage with Brussels over a new withdrawal agreement, Johnson said “there is only one way forward for the country…there must now be an election.”

Johnson—’minister for the Union’, as he has styled himself—now only represents one element of the United Kingdom, albeit the largest. When he addresses the House of Commons on Hastings’ Day, he will truly ‘Speak for England,’ and England alone.