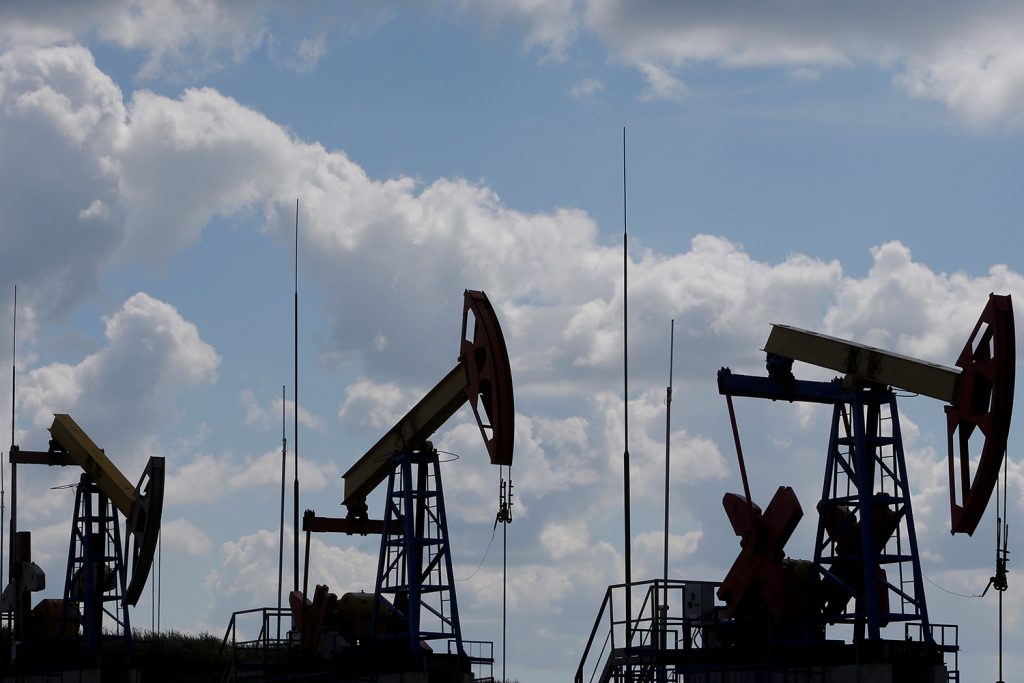 Since January, the spread of the coronavirus has sent global stock markets tumbling and reversed nearly all the positive momentum in oil prices over the past four months, doubling down on a pessimistic oil demand outlook despite numerous short-term risks to supply. As the virus spreads beyond Asia, the oil market will continue to suffer losses, but the question remains: how deep and for how long?

Coronavirus affects the oil market in two ways. First, travel restrictions due to containment efforts limit the use of jet fuel, and supply chains slow and industrial activity declines as companies send workers home—meaning less oil and oil-based products are being used and produced. This has very direct effects on oil consumption and informs near-term calculations of real oil demand. Second, the stock market reaction to the effect of the coronavirus on the global economy builds a projection of global oil demand over the long-term. As broader market sentiment about the health of the global economy declines, so do projections about the future oil demand curve, prompting flight away from oil and energy stocks and further drawing down prices.

Saudi Arabia and Russia feud over coronavirus oil response: Will everyone lose?

“While Russia’s decision last week not to support OPEC’s proposal for a production cut and the subsequent oil price war—which as of publishing has pushed Brent crude down more than 9 percent—is surely part of the larger story of the economic impacts of the coronavirus outbreak, it is actually better understood as a geopolitical story about how US energy production growth has strengthened the United States’ international posture, which in turn has reshaped a number of global relationships,” Randolph Bell says.

Over a remarkable one-month period, early expectations of the impact of the coronavirus on oil demand transitioned from initial assessments that the virus would primarily reduce Chinese oil demand and broader jet fuel consumption to assessments that indicate much larger impacts on global economic growth for the balance of the year. An initial note by Barclays in late January projecting that oil consumption would decline by approximately 600─800,000 barrels per day (bpd) over Quarter 1 and by 200,000 bpd over the entire year has been eclipsed by the International Energy Agency’s (IEA) downward revision of annual oil demand growth by 365,000 bpd. The conversation about oil demand for the balance of the year is now dominated by the emerging possibility of a recession.

The response in oil prices has been significant. Brent prices hit a twelve-month low last week, with the near-term outlook looking grim and the forecast looking increasingly dark for the balance of the year. During that period the forward curve, a marker of expected per-barrel value over the rest of the year, has flattened in the past week, signaling that oil traders see no value in holding or selling off their stocks. At week’s end, Brent was trading at slightly over $50 per barrel with West Texas Intermediate (WTI) prices hanging on at $45.26.

Importantly, following nearly a year of market preoccupation with a global oil supply glut, current market sentiment toward projected demand declines is so significant that events that would have otherwise been huge supply-side market movers have gone largely unnoticed. A near-complete removal of Libyan oil from the market (reportedly beyond 800,000 bpd) and an escalation of sanctions against Venezuelan production still constitute larger near-term risks to supply, yet, due to the scale of an increasingly realistic worst case coronavirus scenario on the global economy, both have passed without much attention.

Oil prices bounced back slightly on February 2, with both Brent and WTI rising by around two dollars on the back of a broader rebound throughout the stock market. However, this bump should be contextualized by volatility due to the uncertain economic forecast, expectations for interest rate cuts in the United States and Canada, and anticipation surrounding a possible production cut by OPEC+ as it meets over the next few days.

As the oil market continues to react to an abysmal economic forecast, there are several key items to look out for.

As the COVID-19 coronavirus outbreak continues to accelerate its spread worldwide, the international community is facing a global crisis with public health, geopolitical, and economic repercussions. Go beyond the headlines to access the Atlantic Council’s deep expertise in policy areas impacted by this growing global emergency.

In particular, the anticipation surrounding a possible cut from OPEC+ makes it the most pivotal event to possibly restores some oil market confidence in the short term. These cuts could reportedly be as large as 1 million bpd, however, Russia’s apparent hesitancy to participate in these cuts remains an open question, which is important in two ways. First, if Russia does decide to participate, there will likely be a strong declaration of when those cuts would be revisited, risking that any production cuts are interpreted as a of a shorter-term solution to what the market is increasingly pricing in as a longer-term economic downturn. Second, in a worst-case scenario where Russia chooses to either not participate or limit its participation in a production cut, not only will the effectiveness of Saudi or UAE-driven cuts be limited but the supply-side measures might pale in comparison to the possible crash in market confidence in the group’s consensus and ability to manage the supply glut.

Meanwhile, the pace of the virus’ spread to the United States and Europe has the potential to further impact broader market confidence as the risk of key financial centers becoming materially impacted by containment efforts grows. This will only add to record stock market losses and incentivize flight away from oil as confidence in the economic forecast continues to decline and/or panic sets in. Despite attempts last week from US President Donald J. Trump to reassure the public that the United States would not be impacted, the ability of the United States to completely seal itself off from the spread of the virus is limited.

Over the long term, the spread of reported coronavirus cases beyond China to South Korea, Iran, and, most recently, Italy and California, highlight the challenges associated with containment and further delay projections of when the outbreak might peak. The continued spread of the virus at this stage seems inevitable, which will severely draw down oil consumption in the near term, and increasingly effect expectations for economic growth—and the oil market—recovery over the long term.

With the containment timeline of the virus so unclear, the shape of the recovery curve is increasingly difficult to judge. There are distinct differences between coronavirus and the 2003 SARS virus (where Chinese gross domestic product (GDP) and oil production bounced back within the next quarter), but hopes for a similar “V”-shaped recovery seem well beyond reach as the virus globalizes. Mixed signals as to whether the virus’ containment within China is actually slowing also further complicate evaluations of whether the origins of virus have run their course.

Signs of a recovery in China might place a floor under oil prices and improve the long-term economic outlook. Cuts to interest rates, combined with reports that coal-fired power capacity is back to operating at 95 percent, growing crude stocks, and continued builds in steel inventories suggest that Beijing is positioning to quickly bounce back—a politically necessary move following a third year of declining economic growth coupled with domestic dissatisfaction about how the outbreak was initially handled.

Yet unlike in 2003, China is vastly more connected to international markets and its efforts to unilaterally get the economy working again may only go so far. And when you consider how badly China’s Asian neighbors, such as South Korea (a major hub for intermediate goods), are being impacted, and the possibility of the virus eventually reaching another major oil demand center such as India all could weigh on the global economy and China’s own economic recovery.

Meanwhile, the speed of the coronavirus’ spread makes it increasingly likely that this downturn might be a longer trough than currently expected. A recent report from the United Kingdom’s Department of Health highlighted by Reuters Journalist John Kemp indicates that it could take four to six months to develop a vaccination for the virus and deploy it to a critical mass of patients. Bank of America projected on February 28 that global GDP could just be 2.8 percent this year—the lowest rate of growth since the global financial crisis in 2009. As the virus spreads to countries faster than it can be contained in those already battling the outbreak, those timelines, the economic downturn, and resulting oil market malaise all will have longer tails.

A more “U” shaped recovery poses a number of additional uncertainties. Bank of America further notes that shale companies have a WTI price floor of $45 per barrel before the economics no longer work. Add this to projections from Schlumberger that production is already preparing to slow by at least 600,000 bpd this year, and a prolonged economic downturn or recession and drawdown on oil prices could place insurmountable pressure on short-cycle producers that are already overweight with debt. How such a prolonged downturn could affect elections in the United States would have a long-term effect on domestic oil and gas policy, particularly given that the health of the United States stock market remains a go-to achievement for Trump. On the other hand, the spread of the virus beyond Iran to Iraq, Saudi Arabia, the UAE, and the rest of the Middle East could flip the risk calculus in the market from the demand to the supply-side if the virus begins to affect oil production.

The week of February 21 will be one the oil market won’t soon forget—one which exposed exactly how sensitive the prices are to the demand side of the market. Yet, while the possibility of a major supply correction remains in the cards, a longer-term correction to the oil price collapse of the past week will require a restoration of market confidence in economic growth and the future oil demand picture. Otherwise, the possibility that “black swans” like the Coronavirus might beget more economic “black swans” becomes increasingly real.

Further reading from the Atlantic Council

Saudi Arabia and Russia feud over coronavirus oil response: Will everyone lose?

“While Russia’s decision last week not to support OPEC’s proposal for a production cut and the subsequent oil price war—which as of publishing has pushed Brent crude down more than 9 percent—is surely part of the larger story of the economic impacts of the coronavirus outbreak, it is actually better understood as a geopolitical story about how US energy production growth has strengthened the United States’ international posture, which in turn has reshaped a number of global relationships,” Randolph Bell says.

COVID-19 can trigger a global economic crisis: Time for the G20 to act

As the novel coronavirus crisis builds and threatens a global economic recession, and the need for global cooperation is most acute, it remains to be seen if world leaders can step up and provide effective leadership to mitigate the risk. Judging by the bickering and mistrust displayed in the past two months, it may take a while for such cooperation to materialize.

If the EU and its member states respond smoothly and in a coordinated fashion, the coming days could reinforce the collective value of the European Union. Should the EU appear ineffective as the virus spreads, that will color European attitudes for decades to come.