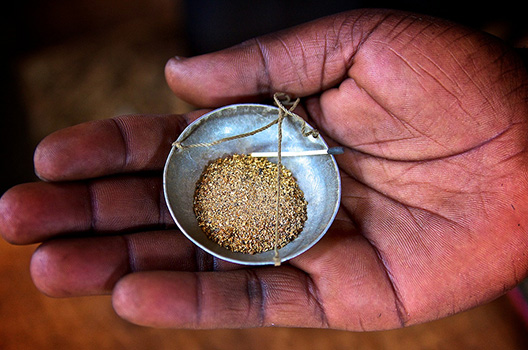 Over $600 million in gold is illegally smuggled out of Congo every year, and armed groups capture a significant percentage of it. (Sasha Lezhnev/Enough Project)

The world’s most ubiquitous symbol of wealth is fueling the decades-long conflict in the Democratic Republic of the Congo, policy experts said at the Atlantic Council in Washington on October 24. Militias and warlords are selling gold to fund their military activities and political control in eastern Congo and their illicit trade is not just flowing to the black market, but “may be coming here to the United States as well as Europe,” Sasha Lezhnev, deputy director of policy for the Enough Project, explained.

“Gold has always been a bit challenging” to protect against illicit trade, Hillary Amster, senior program manager for the Responsible Business Alliance (RBA), said. “Gold is easy to smuggle, easy to exchange, can be used as currency, and is really malleable—you can melt gold in your kitchen.” Importantly for smugglers, “it is very east to portray gold that might be mine gold (from militias) as just scrap gold” to smelters and refiners, according to Amster.

The Democratic Republic of the Congo (DRC), a vast country in south-central Africa with more than eighty million inhabitants, has been embroiled in conflict since the ouster of dictator Mobutu Sese Seko in 1997. After a six-year civil war involving most of the DRC’s neighbors, the eastern regions of the country have remained in perpetual conflict.

According to Lezhnev, the DRC’s vast mineral and gold wealth “are not the reasons the conflict began, but they are a significant contributor to fueling the conflicts and allowing them to continue,” by providing sanctioned militia and government leaders with financing. Lezhnev cited data from the International Peace Information Service estimating that more than seventy percent of gold miners in eastern Congo “work in gold mines under the control of armed groups.”

Gold not only benefits rebel and militia leaders but is part of “a deliberate strategy on behalf of certain individuals in the government—we call this strategy the violent kleptocracy system—which allows military commanders to become wealthy and for corrupt officials to profit as part of that,” Lezhnev said.

Lezhnev, who spoke at an Atlantic Council event launching a report by Enough’s partner The Sentry, called “The Golden Laundromat,” claimed that hundreds of US companies could have possibly received Congolese gold mined in conflict areas within their supply chains in 2017.

The focus of The Sentry’s report is a “specific corporate network,” Lezhnev explained, which sources gold from eastern Congo to Uganda and then transfers it to a company in Dubai that is an apparent affiliate of a major refinery in Europe. The gold may then be sold to companies in Europe, the United States, and around the world, according to 2018 corporate filings with the Securities and Exchange Commission.

Amster argued that smelters and refiners are the crucial “linchpin” for addressing the illicit gold trade. There are only 330 smelters and refiners worldwide for tin, tantalum, and gold, Amster argued, making it easier to monitor these entities. Amster added that “this is where in the supply chain the materials become indistinguishable” from other source material, making it the last point in the production process where illicit gold can be accurately identified.

Amster’s Responsible Business Alliance is one of a collection of industry groups that helps businesses monitor due diligence compliance among smelters and refiners to ensure that their products do not contain illicit gold. Substantial progress has been made, Amster argued, as 101 of the world’s 156 identified gold refiners have undergone an assessment with RBA or another industry group. Growing awareness amongst industries, especially in the jewelry business, is also pushing these companies to better limit their exposure to conflict gold, Amster said, without passing on the cost to consumers.

Many of these companies, according to Amster, recognize that avoiding illicit gold “is the cost of doing business.”

Bronwyn Bruton, the Atlantic Council’s director of programs and studies and deputy director at the Africa Center who moderated the event, contrasted attempts to spread awareness of illicit gold smuggling to the high-profile campaign on Africa’s “blood diamonds” in the early 2000s, questioning the potential of illicit gold to garner the kind of awareness that conflict diamonds have generated.

Lezhnev nevertheless stated these positive steps represent a “total 180-degree difference from where we were ten years ago,” but cautioned that more must be done. “There need to be network sanctions against both the companies and the beneficial owners and directors of these companies” who knowingly accept and smelt or refine illicit gold, Lezhnev said.

On the bright side, “there are now sixty gold mines in eastern Congo that are certified as conflict-free,” Lezhnev said, and “that number is growing.” But these gold mines suffer from “one of the highest gold tax rates in the world,” and from a lack of legal title to the mines they operate in. These government policies severely hamper legitimate business as “you can just put [gold] in your pocket, cross the border, and you are going to pay zero tax,” Lezhnev said.

J. Peter Pham, vice president for research and regional initiatives and director of the Africa Center at the Atlantic Council, noted that the DRC is “at a critical moment” with crucial elections two months away. Without stopping the support for the illicit gold trade, the incentives for various Congolese actors to support peace and stability will be few and far between.

The world must do more to stop its indirect support for the conflict in Congo, Enough’s Managing Director Brad Brooks-Rubin said, “so that the Congolese people will no longer be the losers for having such a robust amount of resources, especially gold, within their borders.”