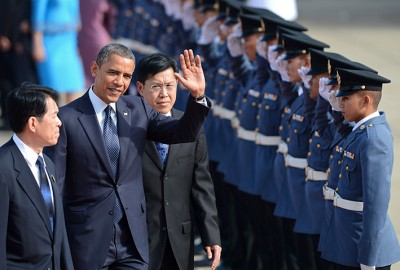 The joke’s sting lies in the law of unintended consequences. Beijing’s increasingly provocative moves include cutting a Vietnamese seismic-exploration ship’s cables, disrupting oil exploration, declaring the entire South China Sea under Chinese sovereignty and making some hitherto unpublicized but very sensitive challenges to Malaysia. All seem tailor-made to produce exactly what China says it doesn’t want: a de facto anti-China coalition backed discreetly by the United States and reaching from India to the Sea of Japan.

As if to put an exclamation point on it, the Philippine foreign minister recently said that if Japan rearmed and abandoned its pacifist constitution, Manila “would welcome that very much.”

What is going on? Does persistent, assertive Chinese behavior amount to self-containment or even isolation? One is tempted to think so. From recent travels in Japan and elsewhere in Asia, we have returned with the following conclusions:

First, territorial tensions have increased with deceitful PRC moves. During 2011, heir-apparent Xi Jinping in closed-door meetings soft-soaped visiting Asian leaders, leaving them with an unambiguous sense that he would work to abate territorial tensions. The now newly anointed Chinese president said the same thing in secret meetings with Hanoi’s politburo in December 2011. In fact, the opposite has occurred.

Second, China has become more aggressive in the South and East China Seas. In mid-August 2012, two interdictions of seismic vessels operating well within Malaysia’s EEZ have had the effect, in one senior Malaysian’s words, “of destroying in a stroke three decades of careful diplomacy.” Unlike Vietnam, Indonesia, Singapore or the Philippines, Malaysia had always avoided directly challenging China’s “Nine-Dotted Line” enclosing most of the South China Sea. (Beijing refuses to provide latitudinal and longitudinal coordinates for the lines.) Last July, China created a new “city” on contested Woody Island to “administer” its claims in the South China Sea, and in November, it issued new passports including all of the South China Sea. This led ASEAN Secretary General Surin Pitsuwan to warn that the South China Sea could become “Asia’s Palestine.”

Finally, onshore temperatures have also risen. After drawing a comparison between Beijing’s minority policies and self-immolations by desperate Tibetans, a U.S. official earned a venomous response last week. The Chinese foreign ministry described the comment as “utterly disgusting”—a term better fitting the decision to use such grotesque language. (China also is messaging multiple audiences—Australia, the EU, India and Japan.)

Of the four areas outlined above, the first two—addressing territorial issues—have really caused jaws to drop. They are now setting. Naturally disposed to sense purposeful enmity, defense and security establishments see duplicity from the new PRC leadership. Fewer in China’s neighborhood put faith in statecraft trying to differentiate one country’s posture from another or find nonconfrontational ground with China.

Is there a way out of this cycle of self-inflicted injury? White House handlers didn’t help when they chose the wrong verb—”pivot”—to talk up President Obama’s Asia Tour last summer. Their substitute term, “rebalancing,” hasn’t altered the narrative, as any Google search reveals.

But the “pivot” is a canard. Like its predecessors, the Obama administration has continued forward U.S. deployment in Asia while cultivating alliances and partnerships. In each instance, overlapping national interest provides the glue, buttressing a continuityof compatible, mutual interest in the Asia-Pacific.

During the mid-2000s, both major and minor countries along China’s periphery quietly signaled their wish for more overt balancing by the United States. We obliged. The Chinese pretend not to know this—and then accuse Washington of moving to “contain” China. In fact, Beijing’s current posture has prompted counterbalancing reactions across the region, from India to Vietnam and Japan. By contrast, Beijing’s earlier “smiling policy” had worked wonders for China, preparing the ground for ever-greater regional ascendancy.

This change since 2008 also baffles many Chinese. We know first-hand many influential people in China who privately bemoan the disproportionate influence of the PLA commands. They have little regard for the Central Military Commission, from which Xi Jinping draws much of his support.

We know executives in China’s national oil companies (NOCs) who also belong to the Communist Party’s upper echelons. Many realize, in strictly business terms, that tensions drive up shipping-insurance rates and discourage oil, gas and other mineral exploration along the western Pacific. This annoys them. Like their counterparts in other Asian NOCs, they sense growth in offshore prospects for exploration and production.

So why the bad-boy behavior? China’s assertive policies raise fundamental questions about ultimate intentions. For example, does the edginess portend a Chinese-style Monroe Doctrine for East Asia? And shouldn’t it matter to Beijing that its approach to maritime sovereignty runs so directly counter to the Law of the Sea Treaty it has ratified?

Perhaps Beijing is more an irredentist than a revisionist power, primarily seeking redemption from previous indignities and humiliation. After all, no nation benefited more from the system of globalization over the past three decades than China.

The United States, still the steward of a rules-based international system, has also exercised great power prerogatives on many occasions, including the Monroe Doctrine and various regime-change predilections. Yet for all this, the United States remains the architect and leading steward of the postwar international system, which continues to enrich China—as well as Japan, South Korea, India and the ASEAN states. What great power, intent on containing a rival, also works to enrich it?

Despite the bravado, deliberately vague dotted lines and other moves seeking payback for a few bad centuries, China has no choice but to come to terms with neighbors hoping the United States will remain a Pacific power for an indefinite time to come. Despite Beijing’s protests, it’s the other Asian powers that want America there—not as hegemon, but as balancer. Having lost its quasi-monopolist grip on Burma, China now has only two close friends in all of Asia: shaky Pakistan and pariah North Korea.

If the recent and rather crude nationalist bluster serves as tonic for domestic weakness, Beijing is buying itself real trouble. A better path still lies open: China can reach an understanding with the United States about each country’s respective Asian footprint and then join in stewardship of a rules-based maritime system. But Beijing’s recent moves instead entrench a stupid and self-marginalizing policy, deepening Sino-American mutual suspicions and making that mutually beneficial destination harder to reach.

James Clad was U.S. deputy assistant secretary of defense for Asia Pacific Affairs from 2007-09. Robert A. Manning is senior fellow at the Atlantic Council and served on the State Dept. Policy Planning Staff (2004-08). This piece was first published in The National Interest.