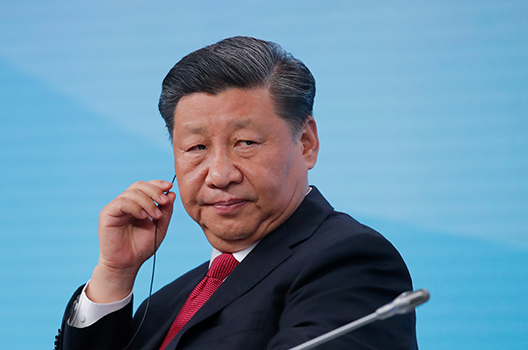 Chinese President Xi Jinping’s first state visit to North Korea this week will underscore Beijing’s clout in Pyongyang and, by doing so, Xi may be looking to re-energize a US effort to denuclearize the Korean Peninsula and gain leverage in stalled US-China trade negotiations.

“President Xi recognizes that closer relations with North Korea’s leader will give China additional leverage in its ongoing [trade] dispute with the United States,” said Jamie Metzl, a nonresident senior fellow in the Atlantic Council’s Scowcroft Center for Strategy and Security.

US President Donald J. Trump has linked China’s help in convincing North Korea to give up its nuclear weapons to US flexibility in trade talks with Beijing. US-China trade talks ended without a deal in May and Washington accused Beijing of backtracking on several commitments. China denies the accusation.

In a tweet on June 18, Trump confirmed his meeting with Xi on the sidelines of the Group of Twenty (G-20) summit in Osaka, Japan, later this month. “Had a very good telephone conversation with President Xi of China,” Trump wrote on Twitter. “We will be having an extended meeting next week at the G-20 in Japan. Our respective teams will begin talks prior to our meeting.”

For six years, Xi ignored invitations to visit North Korea largely due to displeasure over Pyongyang’s provocative nuclear and missile tests. But Xi has softened his position as US-North Korean diplomacy, marked by two high-profile summits between Trump and North Korean leader Kim Jong-un over the past year, picked up.

On June 20, Xi will travel to Pyongyang on a two-day state visit. Chinese media reported that Xi and Kim will discuss bilateral ties and ways to resolve tensions on the Korean Peninsula.

The second Trump-Kim summit, held in Hanoi on February 27 and 28, collapsed over North Korea’s refusal to give up its nuclear weapons. As US-North Korea diplomacy faltered and a US-China trade war heated up, Metzl said: “The incoherence of the Trump administration’s foreign policy is pushing America’s adversaries together.”

“By antagonizing America’s adversaries and alienating its allies, the Trump administration is isolating America precisely at the moment when the United States needs to build global coalitions to solve the world’s most challenging problems,” he added.

Robert A. Manning, a senior fellow with the Atlantic Council’s Scowcroft Center for Strategy and Security, noted that Kim, in his new year address, said he would be forced to look elsewhere if the United States was not going to help him. “That could also explain Xi’s visit,” Manning said.

Manning acknowledged that the timing of Xi’s visit to North Korea was “certainly interesting.” And that’s not just because of the Xi-Trump meeting that follows. He pointed out that Xi has suffered a significant policy defeat this month as a consequence of massive protests in Hong Kong over a controversial bill that would allow people in Hong Kong to be extradited to mainland China.

While Xi has been promoting a “one country, two systems” model for Taiwan, the extradition bill would have undermined this very arrangement for Hong Kong, Manning said. Hong Kong’s chief executive, Carrie Lam, bowed to pressure from the protesters and suspended the bill on June 15.

China’s influence in North Korea is born from the critical support it provides to the regime in Pyongyang in the form energy and food exports. Even as Xi rebuffed invitations to visit Pyongyang, Kim visited China four times over the past year.

China believes it has an essential part to play on the Korean Peninsula and in any future denuclearization deal, said Manning. Xi’s visit is a reminder of those Chinese interests.

Chinese interests in North Korea stem from Beijing’s worries about the dissolution of the regime in Pyongyang and the challenges that would create, including, possibly, a rush of North Korean migrants across the border into China.

“The number one Chinese priority is stability,” said Manning. “If they think things might go back to the days of ‘fire and fury’ or that there may be a propensity within North Korea to ramp up tensions to force the United States to be more flexible that may be one factor behind Xi’s visit.”

On the other hand, Beijing does not take a favorable view of unification of the Korean Peninsula, which would put a country aligned with the United States on its border.

Xi’s visit to Pyongyang may also be “damage control,” Manning suggested, noting that North Korea has recently conducted provocative missile tests. “Those provocations have been right below the threshold where the United States would be forced to respond or Trump have to admit his policy is a complete failure,” he said.

Trump has played down Pyongyang’s actions. “My people think it could have been a violation,” Trump said of the North Korean missile tests in a joint news conference with Japanese Prime Minister Shinzo Abe in May. “I view it differently.”

Speaking alongside Trump, Abe, said North Korea had in fact violated United Nations Security Council resolutions by testing short-range ballistic missiles. This is a view that is shared by US National Security Advisor John Bolton and Acting US Defense Secretary Patrick Shanahan.

“For Trump to say everything is fine is a huge disservice,” said Manning, adding that while in Pyongyang, Xi “may try to tamp down North Korean tendencies to raise the stakes.”

Even as US-North Korean diplomacy has hit a rough patch, Trump declared on June 11 that he had received a “beautiful letter” from Kim in which the North Korean leader had offered a “reset” in relations.

While Trump has dangled the carrot of economic development in front of Kim, Manning said the North Korean leader appears to be “risk averse” and “afraid to open his country’s economy to the degree that Vietnam has.”

“The alternative is to work on the edge of sanctions and get a little bit from China and Russia and muddle through. But that is not a recipe for a dynamic economy,” said Manning. “Xi may be playing into that North Korean mindset and trying to set the terms of reference for the relationship,” he added.

Meanwhile, even as China has supported sanctions on North Korea there have been multiple reports that its enforcement of those sanctions has been less than 100 percent.

The United States itself has sent mixed signals on sanctions.

Ashish Kumar Sen is the deputy director of communications, editorial, at the Atlantic Council. Follow him on Twitter @AshishSen.