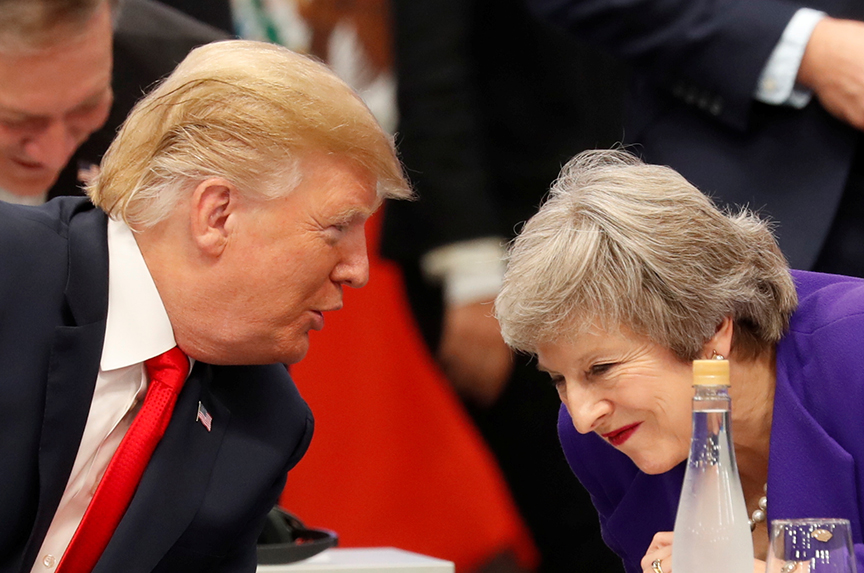 All of the press and expert attention has been focused on whether the United Kingdom’s exit from the European Union—Brexit—will occur by the March 29, 2019, deadline, in conformance with the referendum vote by the British people. If so, under what terms? Will there be a “soft” Brexit in which the UK remains a part of the EU Customs Union with full access to the single market? Will there be a “hard Brexit” in which the UK makes a clean break from the EU?  How will the devilishly difficult problem of maintaining an open border between Northern Ireland, which as part of the UK will leave the EU, and the Republic of Ireland, which will remain in the EU, be resolved without rekindling Irish passions that caused a brutal civil war for years? What is clear is the fact that Brexit will have significant impacts on US-EU and US-UK relations.

During the 2016 presidential campaign, Donald J. Trump openly supported Brexit, given his antipathy toward the EU, and looked forward to a closer US-UK trade relationship through a bilateral free trade agreement (FTA). Brexit, however, will be a blow to US-UK economic relations, to US companies doing business in the UK, and to the economy of the UK, the United States’ closest ally.

First, from my experience as US ambassador to the EU, the UK has been the United States’ prime supporter and kindred spirit on numerous US-EU issues. (This is a view, I believe, that is shared by my predecessors and successors of both political parties.) With Brexit, the United States would lose a major supporter on a range of important trade and regulatory issues, where the UK’s more free-market approach mirrored ours more closely than most EU member states; on US sanctions regimes against Iran, Russia, and other countries;  on data privacy and anti-trust matters;  on counterterrorism, where the United States uniquely has an intimate intelligence-sharing relationship with the UK; and on national security issues, which bridge the EU and NATO, to which the UK also belongs.

Second, a US-UK FTA has promise for both countries. With similar approaches to many sticky issues, such as intellectual property protection, data privacy, use of genetically modified agricultural products, geographical indicators (which are important to France and Italy), no tariffs on agricultural products, and financial services, a bilateral trade agreement with the UK, while not a slam dunk, would be easier that an FTA between the UK and EU or the United States and the EU.

However, there are many hurdles that will leave the UK in a difficult position for several years. One is the timetable. The United States could theoretically begin negotiating an FTA with the UK after March 29, 2019, when the UK leaves the EU. Until then, the EU has the sole trade negotiating authority for trade agreements with third countries like the United States. Unless there is a “hard Brexit” in which the UK not only leaves the EU but severs all special trade relationships with it—an unlikely event because of the utter chaos it would cause to the UK economy—any “soft” exit, like British Prime Minister Theresa May’s current plan in which the UK stays in the EU Customs Union until December 2020 (which could be extended to December 2022) would lead to a substantial delay. While the UK could begin negotiations with the United States immediately after March 29, and the Trump administration appears ready to do so, the implementation of any agreement could not begin until the UK exits the EU Customs Union. Even then the “Irish backstop” to permit open flow of goods and people across the border with the Republic of Ireland would still need to worked out.

Another hurdle is that it would be almost impossible to conclude a US-UK FTA without knowing the final post-Brexit economic relationship between the UK and the EU. The real issue would be whether the UK retains the regulatory autonomy to make its own decisions based upon science and risk assessment, as required by the WTO Sanitary and Phytosanitary (SPS) Agreement, and which the United States would want, or whether the EU will be dictating the terms without any input from the UK. This would have an impact on any UK-US FTA on important issues like hormone beef and genetically modified products.

Likewise,  the same problem would arise with flow of data, given that the EU has more restrictive data privacy rules than the United States. While it is possible for the UK to be able to have one set of rules for its trade with the EU and another with the United States, the EU might not be keen to have a former member state get the best of both worlds. Brussels might see this as creating a “moral hazard” that would encourage other EU member states to wish to leave and follow the British example.

The UK has indicated an interest as well in joining the Trans-Pacific Partnership agreement (TPP), which the Trump administration abandoned. But here again, the EU might not wish to enter into an FTA with the UK that leaves it open for the UK to go its own way with the United States and with Asian and Pacific countries in TPP.

Third, there is already an exodus of some financial services, the backbone of the UK economy, to the European Continent and the United States because of uncertainty over whether banks and other financial institutions will retain the “single passport” that allowed them to do business from the UK throughout the EU member states. The EU would almost certainly not want to continue to give the UK this advantage after Brexit, unless the UK agrees to all EU regulations in the financial services industry.

Finally, what all of this means for US and UK businesses is a period of uncertainty, which could retard investment and trade and be a cloud over one of the largest economies in the world and the United States’ most trusted ally.  It may end up with a positive result with the UK having both an FTA with the United States and the EU. Getting to this point, however, will take a substantial amount of time.

Stuart E. Eizenstat is a former US ambassador to the European Union. He is also an Atlantic Council board director and member of the executive committee.