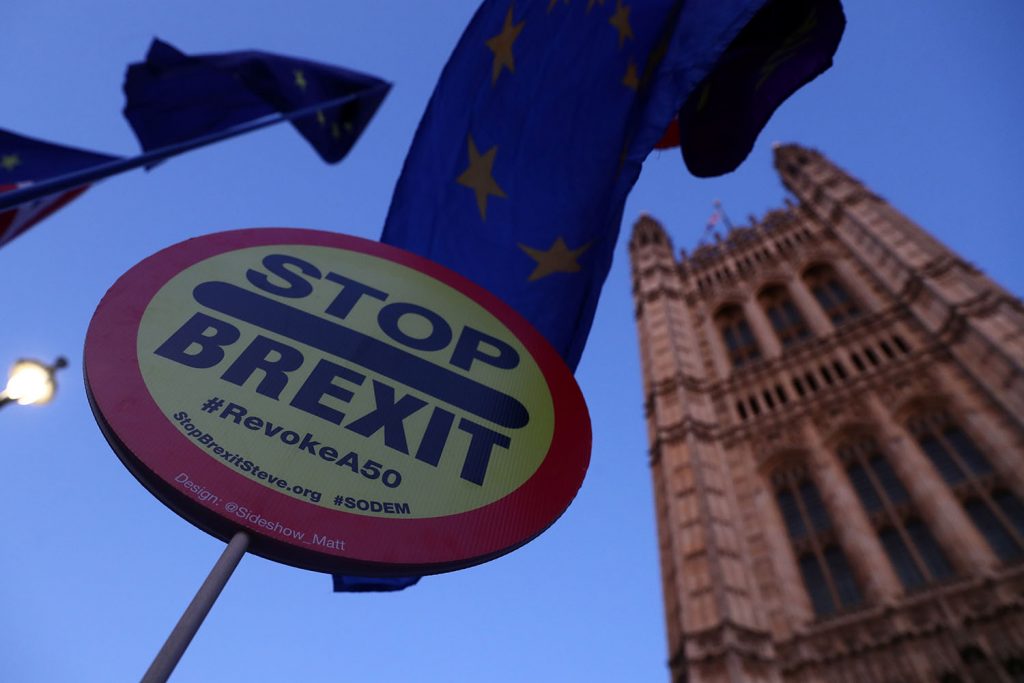 An anti-Brexit sign is seen outside the Houses of Parliament in London, Britain, October 22, 2019. REUTERS/Simon Dawson

Britain faces fresh uncertainty as to just when it will leave the European Union, with Prime Minister Boris Johnson signaling he will pause his attempts to pass the required legislation after losing a key vote in Parliament on October 22.

The prime minister did manage to secure formal approval for Parliament to assess his Brexit bill—the so-called ‘second reading’—by 329 votes to 299. But his effort to limit discussion on the most crucial piece of peacetime legislation in seventy years to just three days in the House of Commons was defeated by 322 votes to 308.

Crucially, although Johnson had said earlier in the day that he would pull the legislation and call a general election if he lost the timetable vote to limit debate, he actually responded to the vote by merely saying that he would pause the legislation while he consulted with EU member states concerning an extension to the current October 31 deadline for Britain’s departure from the EU.

“Until the EU have reached a decision we will pause this legislation,” Johnson told a packed House of Commons. “The EU must now make up their mind how to answer Parliament’s request for a delay.”

But his statement also included a declaration that sounded more like a threat than an offer to compromise further on his withdrawal agreement. “The Government must take the only responsible course and accelerate our preparations for a no deal outcome.”

His comments were made immediately after Opposition Labour Leader Jeremy Corbyn had offered to work with the Government to deliver “a reasonable compromise” to set a new timetable for discussion of the Brexit bill that the Government had brought to the House at the start of the day’s proceedings.

The bill covers such key elements as the transition period between the UK’s formal withdrawal from the EU and the actual implementation changes in trade and regulatory relations between the UK and the remaining twenty-seven EU member states.

The withdrawal agreement that Johnson’s government concluded with the European Commission on October 17 provides for this transition period to last until the end of 2020, but further extensions may be required in some areas.

It also covers such politically contentious issues as the rights of UK residents in the EU and of EU residents in the UK, and the payment of the 33 billion pound “divorce bill” required to meet the existing UK obligations towards the current EU budget and longer-term commitments such as infrastructure and pensions.

Above all, the bill establishes a de facto customs border in Irish Sea in order to ensure—for legal, political and security reasons—that there is no need for a customs border on the island of Ireland, even though the British province of Northern Ireland, which will leave the EU under the Brexit legislation, shares a 310 mile land boundary with the Republic of Ireland, which remains in the EU.

All this is set out in a 110-page bill that is accompanied by no less than 636 pages of explanatory notes. No wonder so many MPs wanted more than just seventy-two hours to scrutinize what the bill means for the UK’s future. Moreover, the Government’s rushed timetable ensured there was no time for the Independent Office of Budget Responsibility to carry out its widely anticipated analysis of the economic impact of the Government’s Brexit plans. At present, the prevailing assumption is that a managed Brexit would cause a fall in gross domestic product, possibly by around four or five per cent.

It is therefore hard to escape the conclusion that the bill was not only being rushed because Boris Johnson wanted to deliver on his promise that Britain will quit the European Union on October 31 but in very large part because the Government did not want the bill to undergo any detailed examination.

One element that will certainly be addressed whenever consideration of the bill is resumed is that, if no further agreement is reached on future trade relations with the EU by the time the transition arrangement expires at the end of 2020, the Government can still take the UK out of the EU without a deal. The bill does not include any mechanism for Parliament to ensure that Britain does not leave without a deal at that stage.

Responding to the day’s events, European Council President Donald Tusk said the EU would grant the UK an extension to its departure date. But the European Commission in Brussels will now have to decide just how long an extension to grant Britain—and for what purpose. It could limit the extension to just a few weeks, to give the UK government time to get the through Parliament. But it may opt to give it much longer, not least if it thinks that the fraught nature of British politics is such that a general election or a referendum might have to be held before Parliament finally decides the issue.

At present it does not look as if there is sufficient support in the House of Commons for a new referendum, and while Johnson would like to have a general election, he is constrained by legislation that requires him to secure a two-thirds majority in the House of Commons if one is to be held before the next scheduled poll in 2022.

So right now the ball is in the Commission’s court. But in the next few days they will bat it right back to Boris Johnson. And who knows what he will do with it then.

Brexit: Another day, another crisis

In a day that has created as much uncertainty as any other in the four-year long saga of Britain’s proposed exit from the EU, Johnson actually managed to trigger not one but two constitutional crises.

After Brexit, will Scotland take the high road out of the UK?

Just two years after Scots narrowly rejected independence by referendum, a second bite at the apple―IndyRef2―is being widely discussed, and one recent opinion pollshows it leading to a pro-independence result.

While London and Hong Kong will continue to play outsized roles in international business, their privileged status may be more precarious than it seems.