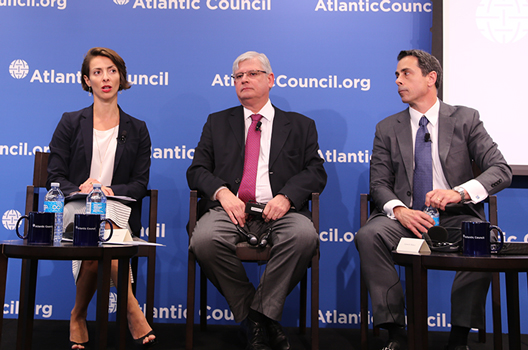 Former Brazilian President Luiz Inácio Lula da Silva’s conviction on corruption charges is not a political statement, but an enforcement of the law demonstrative of Brazil’s commitment to combat corruption at the highest levels of society, Brazilian Prosecutor-General Rodrigo Janot said at the Atlantic Council on July 19.

“What we do is to apply criminal law… and look for the criminals despite the fact that they have political mandates,” said Janot in a keynote address. An investigation such as Operation Car Wash, a sprawling anti-corruption probe that has garnered a great deal of international attention for its scope and efficacy, is “not a political action, but applying the law, enforcing the law,” he insisted.

“The law that exists is to be applied to everyone regardless of their religion, their race, or their status,” said Janot.

“Brazilian prosecutors and law enforcement have been at the forefront of the anti-corruption fight over the last few years,” US Acting Assistant Attorney General Kenneth Blanco said in a keynote address. Operation Car Wash, especially the guilty verdict levelled at Lula, “put Brazil at the forefront of countries that are working to fight corruption both at home and abroad,” Blanco said.

However, “without international legal cooperation, it would be impossible to do what we have been doing,” said Janot.

According to Blanco, in an increasingly globalized world, where crime is transnational, combatting corruption at the highest levels requires international cooperation, such as that exhibited between the United States and Brazil.

“Economies now are global… they become more global every day. In that as well [so] do the criminal enterprises; they are global,” said Blanco. “They do not respect borders,” he added. Consequently, countries, while keeping in mind respect for each other’s sovereignties, must work together. According to Blanco, “our biggest investigations are increasingly transnational.”

“The criminals we seek to identify and bring to justice move quickly, and it’s imperative that we do the same,” he said, adding: “To succeed in this commitment, we will always seek, when appropriate, cooperation with countries like Brazil.”

Janot described how international cooperation, namely close coordination between legal and law enforcement counterparts in all countries involved in the investigation, has played an essential role in the advances made toward prosecuting corrupt officials and companies around the world.

By sharing evidence through secure channels and close collaboration between US and Brazilian counterparts, the criminal fraud divisions in both countries have closed on major transnational cases, namely, the Odebrecht case. The largest construction conglomerate in Latin America, Odebrecht was investigated by Brazil, the United States, and Switzerland for corruption. The case ended with nearly seventy-seven officials convicted in Brazil, and $2.6 billion paid in fines.

In transnational cases it is essential that participating countries and their law enforcement and investigative bodies come to a consensus on exactly what is considered corruption and how they must fight it, said Blanco. “We all agree, at least generally speaking, logically what it might be,” he said. According to Blanco, corruption “undermines the rule of law, threatens the national security of countries, puts honest companies at a disadvantage, and breaks down the structure of society.”

“When we shed a light on corruption, it’s the best way to clean everything,” said Janot. “Brazilian people are really tired of corruption,” he added, saying: “It steals the hope and the future of a people.” Throughout Brazil, and the United States as well, Blanco described a widespread frustration among people who are suffering from a lack of security resulting from corruption in the government. As a result, he said, “people feel like they can’t advance. They are demanding action. They are no longer silent.”

Janot described how it is pressure from civil society and the free press which has not only driven the efforts of Operation Car Wash, but ensured the proceedings remain transparent and accessible to the public. In light of increasing public frustration and the gains made in Operation Car Wash, Janot said: “I don’t know if the system is completely changed, but the ways and the steps taken are irreversible.”

“I don’t believe the Brazilian society will accept to go back to a system like it was before this investigation,” said Janot, adding: “We still have a long way to go, but with what we are doing right now, I don’t think we can go back.”

In the event’s second panel, Fernando Mello, partner and senior political analyst at Jota Business, lauded the “long walk of Brazil toward accountability and the rule of law.” He noted that until 2001, Brazil’s constitution stipulated that politicians could be not be investigated. The investigation into Temer’s activities marks Brazil’s first criminal investigation of a sitting president. Though this constitutes a historic development, according to polls conducted by Jota last week, 52 percent of Brazilian congressmen believe that Temer will complete his term.

Mello joined Patrick Stokes, partner at Gibson, Dunn & Crutcher, LLP; Mauricio Valeixo, director of the division of investigations and organized crime operations of the Brazilian Federal Police; and Alana Rizzo, director of Abraji and journalist-in-residence at the University of Chicago’s Booth School of Business. Murta moderated the panel.

Different countries seeking to combat corruption occupy different spaces in terms of development, willpower, and tools for investigation, however, “Brazil jumped… from the beginning of that spectrum to the end of that spectrum as quickly as any country I’ve ever seen,” said Stokes, who formerly served as senior prosecutor and chief of the Foreign Corrupt Practices Act Unit at the US Department of Justice.

According to Stokes, adapting their systems and increasing international cooperation has allowed Brazil to optimize its legal system, thereby putting cases together much more quickly and effectively, as has been seen in Operation Car Wash.

In addition, civil society controls what prosecutors do on a daily basis, said Mello. Consequently, “Car Wash was one of the investigations where pretty much everything was made public,” said Rizzo, adding: “The media in this case had a secondary role.”

“It’s not going to be one institution to overturn this situation in Brazil,” said Valeixo. “It’s in the hands of Brazilian society that’s… been the victim of this corruption,” suffering with low-quality schools and hospitals. According to Valeixo, “Brazilian society has to take responsibility to forge ahead and make demands of its government.”

Rachel Ansley is an editorial assistant at the Atlantic Council.