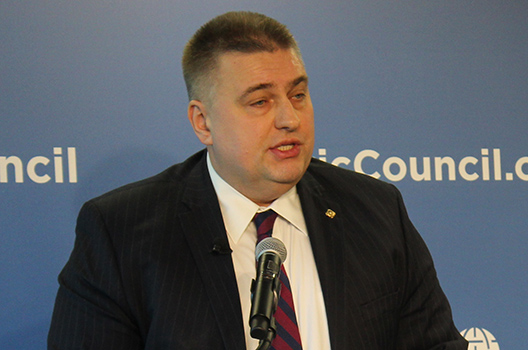 Oleg Kravchenko, deputy minister of foreign affairs for the Republic of Belarus, speaks at the Atlantic Council on January 31, 2019.

Deteriorating trust between Moscow and the West has caused the situation to become “more like you are in the Cold War when basically you have only two major actors defining all security matters in Europe,” Kravchenko said. Belarus and other former Soviet countries “are supposed to make a choice and be with one or the other,” but he warned that “this choice, this dilemma between East and West [that] has been imposed by the current situation is extremely counterproductive and dangerous.”

“Belarus does have a special strategic relationship with Russia,” Kravchenko explained, arguing that the view from the West that Belarus’ alliance with Moscow is “the wrong choice demonstrates how deep the ideological divide is.”

Kravchenko was insistent that Minsk can play a sort of bridge role between the Moscow and the West, especially in defusing tensions on the border and working to end the conflict in Ukraine. Belarus’ new military cooperation projects with Western partners were meant “to contribute as much as we could to defusing tensions and rebuilding trust,” Kravchenko said. “And, most importantly, to minimize the possibility of small incidents due to lack of communication that could potentially lead to much more serious devastating consequences.”

In a significant development earlier in January, Belarus lifted the cap on the number of US diplomats allowed in the country. This breakthrough occurred even as ties between Minsk and Moscow have become strained over Russia’s plans to charge Belarus higher prices for crude oil products.

Belarus has increased its ties with the West, including military-to-military cooperation with the United States, the United Kingdom, Germany, Poland, Lithuania, and Latvia, but Kravchenko cautioned that these new ties are “absolutely not to [replace] our alliance with Russia.”

Kravchenko  said that the build-up of NATO forces in Eastern Europe is not seen “as a direct threat for the security of Belarus.” But, he conceded, that the positioning of armed forces by both Russia and NATO “adds, of course, to the risks and challenges for security in the region.” The stationing of troops, he said, is primarily seen by Minsk as purely defensive. “I do not think it is addressed against us.”

While Belarus wants “better relations with the European Union and the US,” Kravchenko said closer ties with NATO at the expense of Russia is out of the question. “Do our neighbors protected by the NATO umbrella really feel safe and secure now?” Kravchenko asked. “If anything large scale happens, it will happen right there in the neighborhood.”

The potential negative reaction to Belarusian cooperation with the West is why NATO specifically should temper its expectations of working with Minsk, Alexander Vershbow, a distinguished fellow in the Atlantic Council’s Scowcroft Center for Strategy and Security and a former deputy secretary general of NATO, argued. “Allies recognize that a too-tight embrace by NATO could be counterproductive,” he maintained. But, he added, “Belarus can play a useful role if it is not pushed too hard.”

Retired Gen. Benjamin Hodges, a former commanding general of US Army Europe, agreed, noting the geographical importance of Belarus on the eastern border of NATO allies in Poland and the Baltics, and the country’s position on Ukraine’s northern border. “Belarus has the chance to play the key critical role in security and stability in Europe,” Hodges said, adding that “it is in the interest of everybody that Belarus is able to live up to [being]…a sovereign country, [a] self-reliant country.”

Despite Kravchenko’s insistence that the Belarus-Russia relationship remains strong, Michael Carpenter, a senior fellow in the Atlantic Council’s Eurasia Center, noted that cracks are beginning to form between the two neighbors. Moscow is increasingly beginning to encroach on Minsk’s sovereignty, Carpenter explained, leading some analysts to talk openly about possible annexation in the near-future. New Moscow rules of energy taxation and concerns about Minsk’s overtures to the West are also causing friction, he argued.

Celeste Wallander, president and chief executive officer of the US-Russia Foundation, warned that these disagreements echo the ones which led to the beginning of the crisis in Ukraine in 2013. “The crisis in 2013-14 wasn’t about NATO membership or about military or security in a direct way, but it was about the nature of the economic and business relationship between Ukraine and Russia,” she said.

Carpenter noted that the bilateral relationship between the United States and Belarus is still clouded by US concern for rule of law and human rights abuses by the authoritarian Belarusian regime, but he and Wallender pointed to the possibility of education exchanges as a first step to restoring some meaningful ties between the two countries.

On Ukraine, Kravchenko said that his country wants “to contribute as much as possible to any attempt to end the crisis.” He pointed to the hosting of the Minsk Protocol process, which attempted to find a negotiated end to the conflict with Russia.

Ultimately, Kravchenko stated that Minsk’s desire is “to be friends with everybody, including the Euro-Atlantic community.”