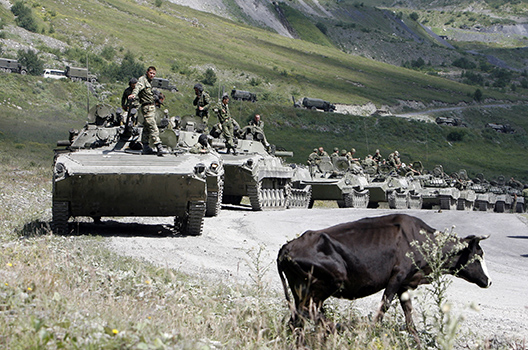 The Atlantic Council commemorated the ten-year anniversary of the 2008 Russia-Georgia war with a series of pieces looking at the impact of the war and the unsettled geopolitical situation today.

Here is a look back at the pieces which ran from August 7 until August 9:

“Exactly ten years ago, Russian forces attacked Georgia, bringing to a violent end a nearly two-decade long advance of a Europe whole and free. In the wake of NATO’s failure to agree on how to advance the membership aspirations of Georgia and Ukraine at its Bucharest Summit months earlier, Moscow acted to block those prospects with its invasion. Moscow’s actions in Georgia ten years ago previewed its far deadlier attacks on Ukraine, which continue today.

“Ten years on, the NATO Summit in Brussels July 11-12 offers the prospect of reversing the shortcomings of Bucharest and restoring momentum to NATO’s Open Door policy.”

A Decade After War with Russia, Georgia Continues its Path Westward – Mary Trichka and Margaret Meiman

“The Russo-Georgian War lasted a brief five days, but its impact is still felt deeply in Georgia and throughout the region. Ten years later, Russia exerts ever-growing influence on Georgia, occupying one-fifth of the country’s territory – the breakaway republics of South Ossetia and Abkhazia – and using this position to project its power throughout the region. Despite Russia’s enduring interference in Georgia, Tbilisi continues to forge a path westward, resolute in their desire to join NATO and the European Union (EU).”

“The 2008 war between Georgia and Russia was a critical test for Turkey. It highlighted Ankara’s delicate balancing act between the West and Russia, one that President Recep Tayyip Erdoğan is still pursuing today.

“The conflict presented a formidable challenge. Georgia was not just another neighbor for Turkey – the two countries had built robust diplomatic and commercial ties since the collapse of the Soviet Union. But Russia, too, had become a leading commercial and political partner for Ankara. Turkish policymakers viewed Russian pushback against the West in the Black Sea as a serious threat and sought to mitigate the conflict.”

The Russia-Georgia War: Not Frozen, Not Forgotten – Alexandra Hall Hall

“Nothing brings home the cost of war better than meeting some of its victims. My most searing memory as British Ambassador to Georgia came when I visited a group of Georgian internally displaced persons near the city of Gori, less than fifty miles from Georgia’s capital, Tbilisi. They lived down a long dirt road, far from any schools, shops, medical centers, or places of work. They had little furniture, scant possessions, and few prospects for improving their lot.

“One elderly woman cried as she told me of her lost family: her husband prematurely dead due to ill health; one son killed in the war; another son killed in a criminal incident in Moscow, where he had moved in search of work. Another family was in despair, because both their children had serious medical issues which were not being treated. Their overall outlook remained bleak – a world removed from the more optimistic mood in Tbilisi, celebrating Georgia’s recently signed Association Agreement with the EU.”

The West Should Stand Stronger with Georgia – Mamuka Tsereteli

“Ten years ago, Russia invaded Georgia, burning and ethnically cleansing the villages of the Tskhinvali region and occupying and recognizing the regions Abkhazia and South Ossetia. Moscow’s immediate objective was to limit the sovereign right of Georgia to resist the corrupt, backward, and technologically obsolete Russian political and economic system, and, instead, join the transatlantic political, military, and economic alliances of advanced economies. The invasion followed the April 2008 NATO Summit, where Georgia and Ukraine were given a commitment, but no actual mechanisms and timeframe to become members of NATO. The Russian Federation saw this as a window of opportunity to prevent the process.

“Since the collapse of the Soviet Union, the Russian Federation has attempted to control the countries in its neighborhood at all cost and punish those countries who resist Moscow’s will. In 2008, the United States and the West did not do enough to deter Russian aggression – this mistake must not be repeated.”

“The 2008 Georgian War was Russia’s first successful military action outside of its borders since the collapse of the Soviet Union. The invasion came on the heels of Russian President Vladimir Putin’s now famous imperialist revival speech at the 2007 Munich Security Conference, where he launched into a long tirade against the West, enumerating Russia’s grievances and posturing to regain a global superpower status.

“On the tenth anniversary of the Russian Federation’s war with Georgia we must remember that only Western unity and a battle-worthy NATO can prevent Russian aggression against its neighbors and deter a wider war.”