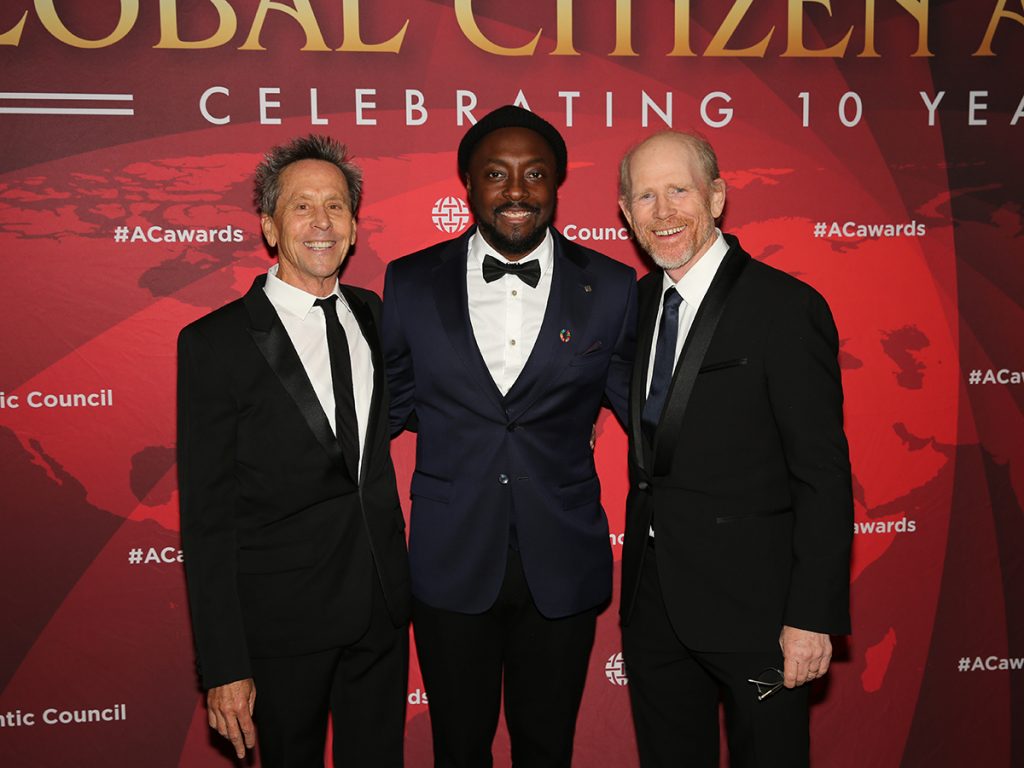 In its tenth year, the Atlantic Council’s Global Citizen Awards recognize “global citizenship at its best while also underscoring the Atlantic Council’s global mission of shaping the future together with friends and allies,” Atlantic Council President and CEO Frederick Kempe said. The September 23 ceremony honored President of the Republic of Chile Sebastián Piñera; Prime Minister of the Netherlands Mark Rutte; Brian Grazer, storyteller, movie and television producer, founder, and philanthropist; and will.i.am, founder of the Black Eyed Peas, founder & CEO of I.AM+, and founder and president of the i.am.angel Foundation.

“The time is now”

President Sebastián Piñera issued a passionate call to other global leaders to do more to help combat climate change during his acceptance speech. “Each generation has its own challenges,” Piñera explained, “but no generation has faced such an urgent and formidable challenge as climate change and global warming.”

Following a day in which Piñera announced to the United Nations Climate Action Summit that his country and twenty-nine others would commit to reach net-zero emissions by 2050, the Chilean president argued that addressing climate change “is a moral obligation with ourselves, our children, our grandchildren, and those who will come.”

“The time for action has come,” he declared. “Let’s move.” 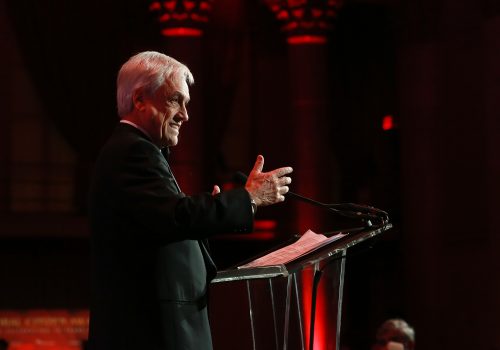 “Empathy is what we all need”

Brian Grazer has had a special routine for the last thirty-five years. The storyteller, television and film producer, founder, and philanthropist has every two weeks challenged himself to meet someone new, an “expert or [person] renowned in anything other than what I do for a living,” he explained. Grazer arranges the meetings, which have ranged from political leaders to artists, for no reason other than to “disrupt my comfort zone,” as he put it.

Grazer, who was honored for his award-winning body of work and his commitment to philanthropic efforts, has “nurtured his [curiosity] in a unique and very power way,” according to Academy Award-winning director Ron Howard, who presented the award to Grazer. “The desire to understand other people, other cultures, other worlds, has helped Brian grow as a person and has helped Imagine Entertainment—our company—thrive in a changing industry,” Howard said.

Face to face communication is the most important thing we can do.

His regular conversations with new people have taught Grazer about the value of empathy. “Face to face communication is the most important thing we can do,” he said. “When you actually look at somebody…you are immediately validating [them] as a human being. And therefore you can relate to each other.”

The sense of empathy has helped him immensely in his work, Grazer explained, because “when you can relate to a protagonist, they can move you.” That same empathy, he continued, can and should be applied to building a better world. “When you learn other people’s perspectives you tend to like them as opposed to not like them,” he argued. “You tend to understand them instead of wanting to fight them.  It’s a positive event.”

“We need each other”

Dutch Prime Minister Mark Rutte reminded the awards ceremony audience that despite the many intense disagreements between the United States and Europe, “it’s a fundamental truth that transatlantic cooperation makes us stronger than when we’re apart.”

While some on both sides of the Atlantic seem to be tempted to go it alone, the growing threat of competition with Russia and China and continuing challenges of climate change and migration means that “it’s in our own [national] interest and in our common interest to keep the transatlantic bond strong and vibrant,” according to Rutte.

For the Dutch prime minister, it is simple: “we need each other.” 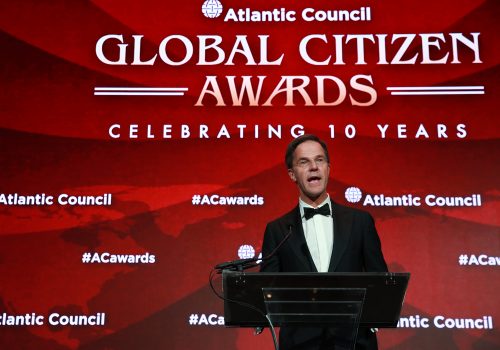 The transatlantic bond must be protected, Dutch prime minister says

These temporary disagreements between allies should not distract either side of the Atlantic from the fundamental importance of the relationship and international cooperation, according to Prime Minister of the Netherlands Mark Rutte.

will.i.am owes his success to acknowledgement. “I come from a very poor neighborhood in East Los Angeles,” he explained on accepting his Global Citizen Award. When busing programs began allowing students from poor neighborhoods to go to schools in wealthier school districts, “kids like me were acknowledged to get a shot towards an education,” he said. “If I didn’t go to school outside of my neighborhood, I don’t know what I would have become.”

That sense of acknowledgement of other people’s struggles needs to continue today, the founder of the Black Eyed Peas, I.AM+, and i.am.angel Foundation argued. “What we are not doing is acknowledging how fast we need to bring people from inner cities and poverty-stricken areas up to speed with technology.” This challenge led him to become involved in FIRST Robotics, an international high school robotics competition which will.i.am has combined with his college prep program in Los Angeles. The program now reaches 720 students in his hometown of Los Angeles, 100 percent of whom graduate high school and pursue college education, including 70 percent in robotics or computer science.

What we are not doing is acknowledging how fast we need to bring people from inner cities and poverty-stricken areas up to speed with technology.

Omar Sultan Al Olama, minister of state for artificial intelligence for the United Arab Emirates, explained that will.i.am’s project is helping to send schoolchildren from 190 countries to the UAE for a competition to develop robotic tools to combat ocean degradation. “Will represents the best of us,” Al Olama said. “He represents the potential of what it means to be a great, positive, and global citizen.”

For will.i.am, the promise of his philanthropic programs are the kids that he helps. “These kids were just like me,” he explained. “The kids in my neighborhood are the ones that are going to create the jobs that we can’t even imagine.”

Exploring the lessons of resilience

In its plan to reach one billion people with resilience solutions to climate change, migration, and security by 2030, the Adrienne Arsht-Rockefeller Foundation Resilience Center is turning to a new voice to spread its work. Actress, playwright, teacher, and author Anna Deavere Smith was announced as the Atlantic Council’s first artist-in-residence, working specifically with the Adrienne Arsht-Rockefeller Foundation Resilience Center on a project entitled “Stories of Resilience.”

“Anna has developed a method of storytelling that creates indelible insights and memories,” that will now be used to explore the many ways resilience is built or tested in global societies, Atlantic Council executive vice-chair Adrienne Arsht said.

Through telling stories of individuals and communities who have built resilience or had their resilience challenged, policy makers and citizens can help build more sustainable societies. “There is a lot to learn about how we as humans have faced the challenges that threatened us in the past, the challenges of now, and how we will face the challenges of tomorrow,” Smith said.

Each of the honorees “demonstrate the definition of global citizenship,” according to Victor L.L. Chu, chairman of the Global Citizen Awards and an Atlantic Council International Advisory Board member. Klaus Schwab, founder and executive chairman of the World Economic Forum and the first awardee of the Global Citizen Award described global citizenship, Chu remembered, as “respect for human dignity and diversity, a service to causes larger than oneself, and an exemplar for future generations.”

Chu admitted that when he and Atlantic Council President and CEO Frederick Kempe created the Global Citizen Awards ten years ago, they did not “anticipate just how crucial the identification, celebration, and promotion of principled, consistent, and purposeful leadership would be.” As Kempe explained, the world is now facing major disruptions including returning great power competition, new challenges for open market democracies, uncertainties about the United States’ role in the world, doubts about the durability of the international order established after World War II, and rapid technological change.

“We see none of these challenges as a reason for despair,” Kempe added. “We see all of them as a call to action because we’ve been through worse before. And we are inspired by the purposeful leadership that tonight’s awardees represent.”

David McCormick, chairman of the Atlantic Council’s International Advisory Board, explained that by celebrating these global citizens, “we celebrate something more fundamental and, really, at the core of the Atlantic Council, which is the idea that through a common purpose and inspired leadership we can navigate our way to a better world.”