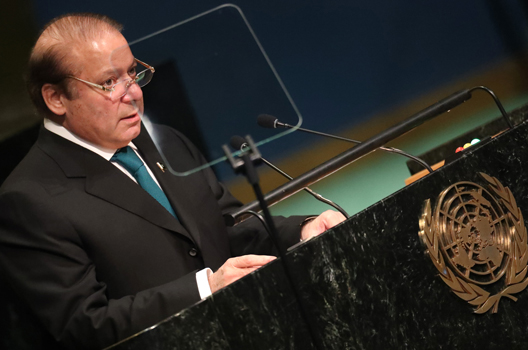 US President Donald Trump’s likely hands-off policy toward South Asia may provide an opportunity for Pakistan and India to address longstanding disputes and reap the long-awaited benefits of cooperation.

While there is significant uncertainty about the next four years of US diplomacy, it is unlikely that Trump will succeed where so many before him failed. As he may not solve the serious security, economic, and environmental problems confronting South Asia, it is time for the region to solve these problems on its own.

The current conversation about what Trump will, or should, do vis-à-vis Pakistan and India assumes an inability on the part of these two nations to resolve their own problems by working together. Security considerations related to terrorism are typically blamed for the seven decades of estrangement between Pakistan and India – the two countries have been to war four times since both achieved independence in 1947, and Pakistan-backed terrorist groups attacked the Indian Parliament in New Delhi in 2001 and the city of Mumbai in 2008. However, with a US foreign policy in flux, regional leadership may be the answer.

The United States is expected to play a leading role in securing Afghanistan and helping Pakistan tackle its internal security problems. Further, Pakistan expects US assistance with deescalating the Kashmir crisis. Without US leadership, there is a risk of a further spread of terrorism, a nuclear war between India and Pakistan, and nuclear terrorism from violent non-state actors such as the Islamic State of Iraq and al-Sham (ISIS). It has been argued that the terrorist attack on the United States on September 11, 2001 was a byproduct of the US abandonment of Afghanistan in the early 1990s, and that the Kashmir insurgency is linked to the United States turning a blind eye to Pakistan’s covert support for insurgent groups in that state. However, such arguments minimize the agency of the regional actors themselves.

Even if there are brilliant policy solutions to the security problems facing South Asia, they are unlikely to come from the current US administration (or any US administration). This is not necessarily due to a lack of regional expertise, but because effective engagement requires a commitment of tremendous resources even if there is little hope for a positive outcome.

It is time for South Asia to take the lead in crafting its future, and the time has never been better. The region is one of the least economically integrated in the world. Intra-regional trade amounts to only 5 percent of South Asia’s total trade (compared to 25 percent in the Association of Southeast Asian Nations [ASEAN]), and investment is less than 1 percent of overall investment. Trump’s de-globalization agenda is projected to disturb the financial stability of South Asian economies. It is time for leadership in South Asia to focus on regional economic cooperation, including with Afghanistan.

Due to limited transport connectivity, onerous logistics, and regulatory impediments it costs more to trade within South Asia than between South Asia and the world’s other regions. Moreover, sustainable growth will require effective management of shared natural resources and disaster risks. The lack of effective economic cooperation has made South Asian countries highly vulnerable to the consequences of the deteriorating liberal international economic order. It has also constrained progress on climate change, water management, HIV/AIDS control, and disaster management.

Regional economic cooperation could serve as the first practical step toward addressing the serious security and environmental problems that face the region. Once this effort bears fruit, the region’s politicians could have the incentives to deescalate conflicts and set agendas for political cooperation. Most importantly, such an approach does not require intervention from the United States, China, or any other outside powers.

Yelena Biberman is a nonresident fellow with the Atlantic Council’s South Asia Center. She is also an assistant professor of political science at Skidmore College.