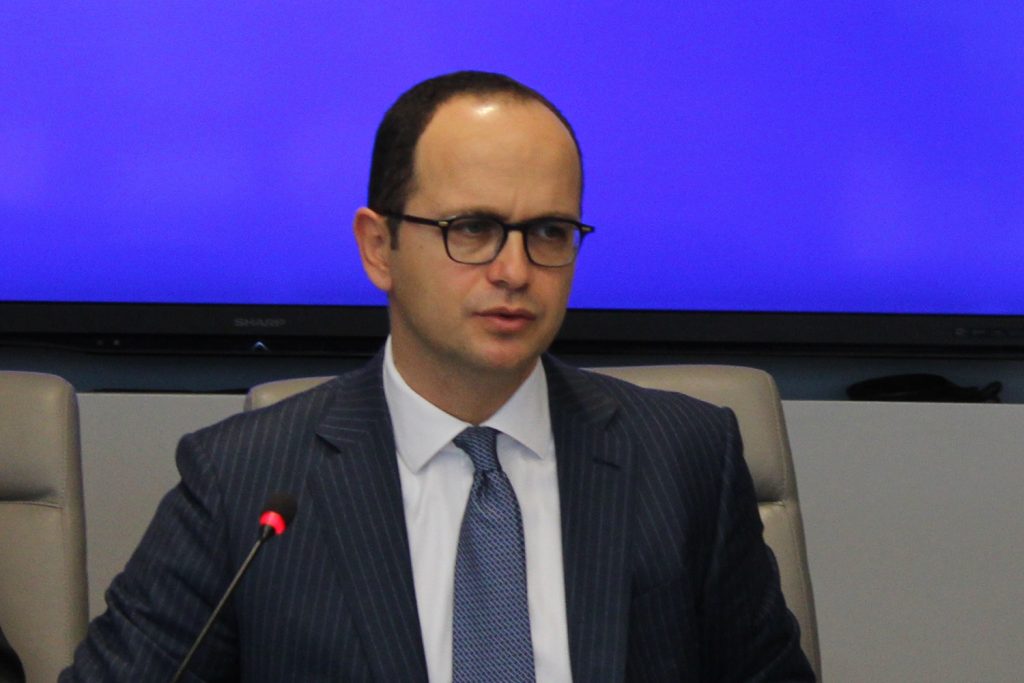 The failure of European Union leaders to greenlight the start of the enlargement process for Albania and North Macedonia in October was “a step backwards” for the region’s path towards European integration, according to former Albanian Foreign Minister Ditmir Bushati. “The European Union has a duty to contribute to the stability and security of Southeast Europe,” Bushati argued, “and therefore it should consider Western Balkan accession as a responsibility, rather than a burden.”

French President Emmanuel Macron reportedly led efforts to block the opening of accession negotiations with both countries over concerns that the European Union’s enlargement process needs significant reform. France has been circulating a new plan that would implement a seven stage process for EU accession, including provisions that would allow EU members to “reverse” the process should candidate countries not make sufficient progress on implementing the needed economic and political reforms for membership.

Bushati said he agreed that “some of the ideas put on the table by France and President Macron should be part of the new enlargement methodology,” but maintained that reform does not mean Brussels needs to “keep hostage Albania and North Macedonia,” while member states deliberate on potential changes. Albania has been an official EU candidate for membership since 2014, while North Macedonia achieved that status in 2005. The European Commission and the European Parliament have recommended that negotiations for membership begin with both countries.

In addition to the stalled paths to EU membership, the Western Balkans is also struggling to reignite momentum towards normalization of relations between Serbia and Kosovo. Buoyed by the successful resolution of the name dispute between North Macedonia and Greece through the Prespa Agreement—which helped open the door for North Macedonia’s accession to NATO—the United States and Europe have hoped to jumpstart renewed talks between Belgrade and Pristina. Macron travelled to Belgrade in July to meet with Serbian President Aleksandar Vučić and US President Donald J. Trump named US Ambassador to Germany Richard Grenell as a special envoy for Serbia and Kosovo. Despite the renewed attention, talks sputtered over the last year after Kosovo implemented 100 percent tariffs on Serbian goods in retaliation for Belgrade’s blocking of Kosovar membership in INTERPOL.

Former Albanian Foreign Minister Ditmir Bushati sat down with the New Atlanticist’s David A. Wemer to discuss Albania’s uncertain accession path forward, the Serbia-Kosovo dispute, and the role Europe and the United States can play in ensuring that the Western Balkan region joins a Europe whole, free, and at peace. Here is an edited transcript of their conversation:

David A. Wemer: The European Council recently declined to open accession negotiations with Albania and North Macedonia. What effect will this decision have on the EU’s relationship with the region?

Ditmir Bushati: “The obstinate opposition to opening accession talks with Albania and North Macedonia—despite the recommendation of the European Commission and the will of the vast majority of the member states and the European Parliament—has put in jeopardy the EU’s remaining influence on its own doorstep and its ability to shape strategic developments and stability in southeast Europe. In my view, this is a strategic mistake that helps consolidate the status quo in the Western Balkans. The European Union has a duty to contribute to the stability and security of Southeast Europe and therefore it should consider Western Balkan accession as a responsibility, rather than a burden.”

Wemer: French President Emmanuel Macron has submitted a plan to reform the EU’s accession process in an attempt to explain his decision to block the opening of negotiations. What is your evaluation of the proposals? Do you support them, or do you fear they will threaten Albania’s accession?

Bushati: “The blocking of accession negotiations with Albania and North Macedonia is widely seen as a step backwards. But there are some good elements in it. The first is the fact that France does not oppose outright the future accession of the countries in the Western Balkans. In my view, Macron’s intentions are better described as an attempt to open a wider discussion about the accession process, its practicality, and its capability of delivering tangible results.

“As I used to say, ‘people do not eat chapters,’ so you have to be able to clearly explain to citizens the requirements and the benefits of this process. You have to be able to show that there is a direct correlation between the pace of the accession process and progress in terms of democratic standards and improvement of living standards. In this respect, some of the ideas put on the table by France and President Macron should be part of the new enlargement methodology. I agree with him that there is a need to reform the enlargement procedure and methodology to bring it closer to the citizens. On the other hand, I really do not see and do not understand why the reform of this process should keep hostage Albania and North Macedonia. It should be easy to reconcile deeper integration within the European Union with the desire of newcomers to be able to start the accession process.”

Bushati: “There is frustration because in June 2018 member states unanimously agreed on a calendar for the accession process for Albania. They recognized the progress Albania had made and agreed that the first intergovernmental conference—which symbolizes the start of the accession process—would take place by the end of 2019. The October decision was seen as a step backwards. It is very important to maintain the credibility and the predictability of this process.

Wemer: North Macedonia will very soon officially become the 30th member of the NATO alliance. What effect do you think this accession will have on the Western Balkans region?

Bushati: “It is positive and encouraging news. Albania has played a very constructive and decisive role when it comes to the internal democratic dynamics in North Macedonia, considering that Albanians are one of the two biggest constituent nations in North Macedonia. We have certainly welcomed North Macedonia’s NATO membership. It strengthens geographically the presence of NATO in our region and it strengthens also the coalition of like-minded countries when it comes to issues related to the security architecture of our continent. I hope that the fact that North Macedonia is becoming the 30th member of NATO is a clear sign of NATO’s political willingness and determination to continue with the open-door enlargement policy.”

Wemer: Progress in the normalization of relations between Kosovo and Serbia has seemingly stalled over the last year. Do you think there is an opportunity to break this impasse and make some progress in normalizing relations? Can Albania play a role in this reconciliation process?

Bushati: “It is very important to be inspired by the decisiveness and the leadership that have been demonstrated by Greece and North Macedonia in overcoming their disputes. Of course, the Serbia-Kosovo dispute is more complicated and it has different dimensions. There is a wide range of topics that need to be addressed. We have to wait for the formation of the new government in Kosovo and I hope that this new government will present a solid strategy on how to deal with the dialogue process with Serbia, in addition to domestic issues. It is very important that the normalization process is meaningful and practical for the citizens of Kosovo and Serbia. I also hope that this normalization process will be followed by an agreement that would ensure the mutual recognition of Serbia and Kosovo and hopefully would pave the path towards EU membership for both.

“I would like to add that this normalization process needs to be followed also by a reconciliation process. That is why I now believe that this case is more complex than the Greece-North Macedonia rapprochement that has been finalized through the Prespa Agreement.”

Wemer: What constructive role can the United States play in the Western Balkans to help resolve these disputes and further the region’s European integration?

Bushati: “The United States is instrumental in that it is key to providing security in Southeast Europe. But it is also important to ensure a division of labor between the United States and the European Union when it comes to the transformation and democratization of southeast Europe, since the region is considered unfinished business in the pursuit of a united European continent. I would welcome any US engagement, especially in the area of democratization of our region, because we need to speak more about democracy, the rule of law, human rights and dignity, and sustainable economic development in our region. The United States’ role in our region remains indispensable.” 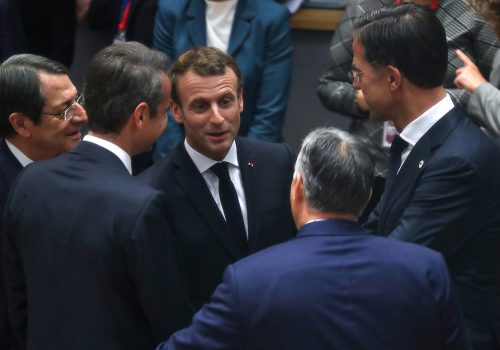 French officials hope the proposal can open the door to a real debate over how the European Union adds new members, while also limiting the political blowback for the Western Balkan countries 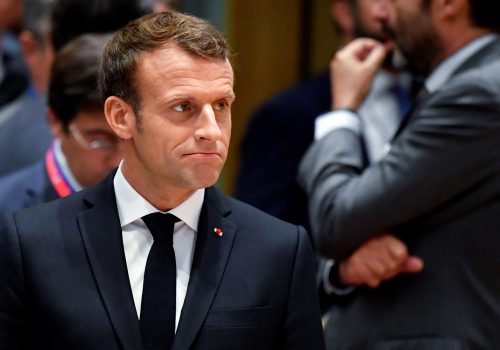 By strongly supporting the government of North Macedonia from the start and granting it the opening of negotiations, it would have been possible to create a virtuous circle in the region and kill four birds with one stone. President Macron chose to do exactly the opposite. 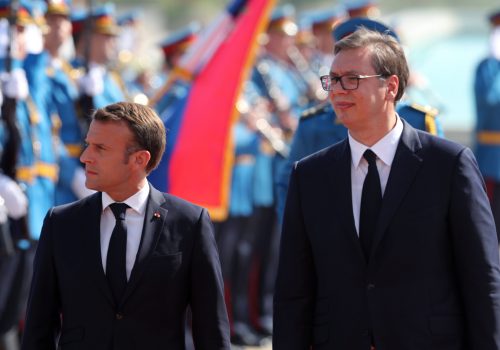 Macron’s trip may yet be remembered as a turning point for French involvement in the Balkans. The payoff could be big for France, but it must first decide if it is willing to prove that the Balkans truly belong in Europe.