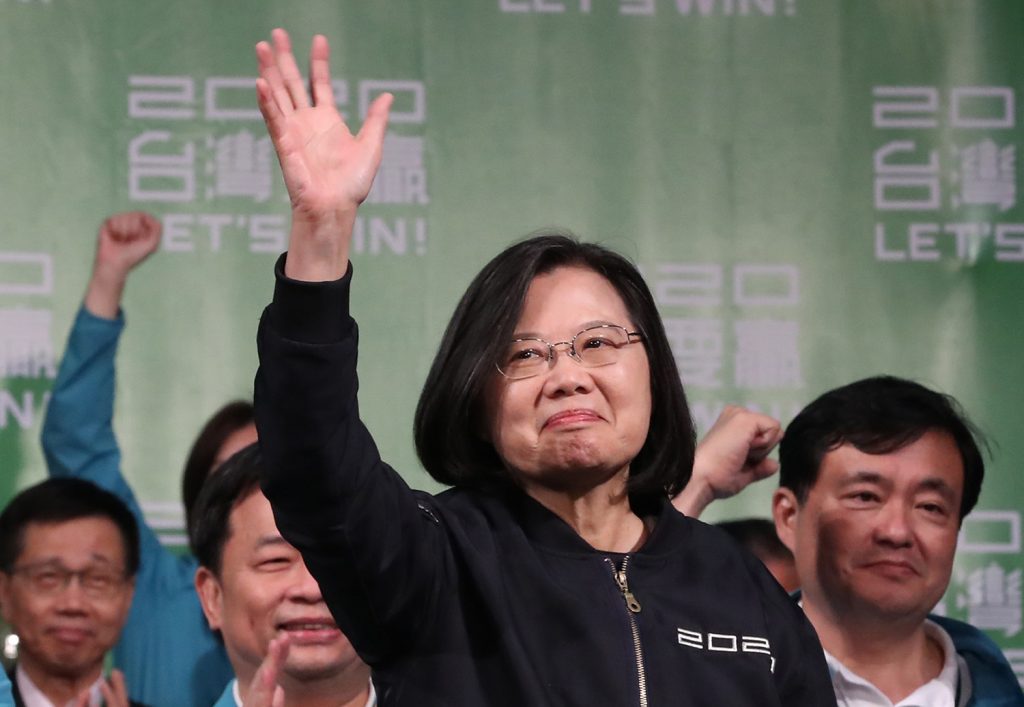 Tsai Ing-wen, current president of the Republic of China, declares her election victory after being shoo-in for the Taiwanese Presidential Election in front of her supporters in Taipei City, Taiwan on January 11, 2020. ( The Yomiuri Shimbun via REUTERS)

The presidential and congressional elections of the Republic of China (Taiwan) have come to an end, with more than 14.5 million people participating in the vote and a total turnout rate of 74.9 percent—9 percent more than the 2016 election. President Tsai Ing-wen was re-elected for a second term with 57 percent of the total vote and a record high 8.17 million votes. President Tsai also led the Democratic Progressive Party (DPP) to obtain sixty-one seats out of the 113 seats in Congress.

Following the election, dignitaries and partners from more than sixty countries and international organizations, including US Secretary of State Mike Pompeo and Japanese Foreign Minister Toshimitsu Motegi, expressed their congratulations by sending letters, messages, and social media postings. These seemingly good results at the polls, however, do not negate the domestic and international issues that President Tsai and the DPP will have to face over the next four years.

In the lead up to the 2020 elections, ideological and political differences within Taiwan became more deeply entrenched, including divisions between “pro-China” and “anti-China” supporters. During the election season, the Kuomintang party (KMT) advocated for the “1992 Consensus,” born from a 1992 meeting in Hong Kong between both sides of the Taiwan Strait, which supported the idea that both the mainland and Taiwan belong to one China. The KMT believes that the “1992 Consensus” has become a central pillar in maintaining the stability of cross-strait relations and supported dialogue with the CCP, while domestically they repeatedly attacked the DPP for “ruling the country corruptly.” The DPP rejected the CCP’s invasion threats and any notion of Taiwan’s demise, utilizing campaign slogans focused on “protecting Taiwan” and “the sovereign war for Taiwan.”

The DPP ran on a platform of “freedom,” “democracy,” and “human rights,” stressing that Taiwan’s sovereignty cannot be violated. Additionally, the DPP’s candidates consistently and repeatedly emphasized that “the CCP undermines Taiwan’s democracy.” During the election, parties on both sides attempted to polarize public opinion to win votes through the promotion of partisan media outlets, such as the Liberty Times and the Sanlih E-Television (pro-DPP), and the China Times media group (pro-KMT). These media strategies brought Taiwan into an era of “emotional politics.” After the election, divisions between these polarized ideological, generational, and ethnic groups will persist, causing a long-term division in Taiwanese national identity.

The basis for national identity rests on kinship and a sense of historical and cultural connections. Taiwan has struggled to find this since the KMT and the government of the Republic of China (中華民國) relocated to Taiwan in 1949; the dispute between Taiwan and the mainland is reflected in the divisions between the Republic of China’s “Three Principles of the People (三民主義)” and the PRC’s “Marxism-Leninism.”

The Republic of China, founded in mainland China in 1911, has strong cultural and national identity connections with the mainland and, in addition to the “1992 Consensus,” is the basis of the KMT’s position on cross-strait relations. Educational reforms introduced in 1994, as well as the implementation of the DPP’s “De-Sinicization (去中國化)” policy, however, have gradually tried to separate the historical and cultural links between the two sides of the strait. The image of a traditional “Great China (大中華)” advocated by the KMT has gradually faded and declined with the passage of time—it has shifted to a new generation of “Natural Independence” born in Taiwan.

In the 2020 presidential election, active political participation among young first-time voters were key factors contributing to President Tsai’s and the DPP’s victories. The duo also benefitted from the resentment of swing voters towards the CCP following the “Anti-Extradition Law Amendment Bill” movement in Hong Kong.

The number of first-time Taiwanese voters between the ages of twenty and twenty-three was 1,186,685, accounting for about 6.14 percent of total votes. According to polls in December 2019, the percentage of those who supported President Tsai in the twenty to twenty-nine-year-old range was as high as 56 percent, demonstrating that younger generations are more likely to see themselves as Taiwanese—which was generally considered to be one of the key factors in Tsai’s election.

On July 2019, a survey conducted by the National Chengchi University Election Research Center (政治大學選舉研究中心) on “Taiwan Identity,” showed that 56.9 percent of the interviewees see “Taiwanese” as their national identity. In this “pro-China” and “anti-China” battle, Taiwanese voters clearly chose to keep their distance from the CCP. This was a watershed moment in cross-strait relations, demonstrating that a new national subjective consciousness was being rooted in a “Taiwanese” national identity.

The DPP shaped this election as a vote to defend Taiwan’s sovereignty and democracy and oppose the imposition of authoritarianism from the mainland. In an exclusive interview with BBC, President Tsai publicly announced her position to the world, stating that Taiwan does not need to declare its independence because Taiwan is already an independent country. This election demonstrated that the Taiwanese people, especially young ones, have expressed greater support for Taiwan’s sovereignty.

Despite this, the CCP still insists on its “One Country, Two Systems (一國兩制)” approach and continues to adopt various measures to threaten and force Taiwan to reunify with mainland China. And, though the DPP’s victory highlights that Taiwanese voters have chosen to keep their distance from the CCP, Taiwan’s geographical position and external situation have not changed. As the strength of the CCP within mainland China has grown in recent years, the Chinese People’s Liberation Army has also increased its military power.

Beijing’s statements towards Taiwan are also increasingly threatening. The Tsai government will face more military intimidation from the Chinese mainland and the CCP will continue to increase its military resources over the next few years. To the extent that an aggressive offensive can be launched at any time, the current state of “Cold Peace (冷和)” in cross-strait relations will continue. This will make the challenges more urgent and the flexibility of the Tsai government’s autonomous policy will be limited.

In the past, Beijing adopted a two-handed policy of “hardening the hard, softening the soft (軟的越軟、硬的越硬)” to deter Taiwanese independence. Beijing bypassed Taiwanese officials and directly strengthened exchanges with Taiwanese civil society and individuals. The CCP also actively contained Taiwan geographically and strengthened their military intimidation. The PRC’s aggression is clear, but when assessing whether they will use force against Taiwan, one must consider three aspects: whether there is “intention,” “capacity,” and appropriate “occasion.”

The CCP’s intent to annex Taiwan is clear. In terms of capacity, the CCP’s comprehensive military strength has increased in recent years, and Beijing’s defense spending was $168.2 billion in 2019 (second only to the United States). In the past ten years, the CCP has built and deployed medium-range missiles that can target US aircraft carriers and military bases in Japan and Guam to weaken the freedom of movement of US forces in Asia and gradually weaken the role of the United States in the Taiwan Strait. In regard to occasion, the CCP’s official “Global Times (環球時報)” mentioned that the CCP would “strengthen the right to define the situation in the Taiwan Strait.” It also responded to President Tsai’s statement that “Taiwan’s future will be determined by twenty-three million people” by saying that “general public opinion is that Chinese society is firmly opposed to Taiwan independence.”

In addition to using “United Front (統戰)” actions such as media penetration, cyber-attacks, and differentiation against Taiwan, it is foreseeable that China will more actively suppress Taiwan’s diplomatic survival space and use threats—such as continuous military force demonstrations—to curb the possibility of Taiwan’s independence. These practices constrain Taiwan’s choices on the diplomatic and international political stage and make the “Occasion” when the PRC can invade Taiwan more flexible.

The rise of the CCP and its authoritarian system, combined with its revamped nationalism and economic power, challenge the values of freedom and democracy, and the stability of the world order. Taiwan, which is at the forefront of the US Indo-Pacific Strategy, has become the first line of defense of democracy. It is undeniable that the Taiwan Strait will be the most likely place for military conflict between China and the United States in the future.

The election of President Tsai Ing-wen clearly indicates that Taiwan is recognizing the threat of the CCP and will continue strengthening Taiwan-US relations. With the establishment of this line of sovereign consciousness, Taiwan also continues to improve national defense construction and military capabilities, while cooperating with like-minded countries to ensure that the status quo of peace and stability in the Taiwan Strait will not be changed unilaterally.

Voters in the 2020 election voted in support of the DPP’s “anti-China” policy, which has brought cross-strait relations to another period of chilly relations and will affect the next four years of Taiwan’s foreign, national defense, cross-strait, and economic policies. After the election, President Tsai presented the four principles of “Peace, Reciprocity, Democracy, and Dialogue (和平、對等、民主、對話)” as the guiding parts of future cross-strait relations. According to a poll on January 15, this approach was supported by seventy-eight percent of the people and about sixty percent of people believed that the CCP should restart dialogue with the DPP government.

Nevertheless, even though President Tsai, who was reelected with huge public support, called for a rational dialogue between Beijing and Taiwan, it will be difficult for Tsai to control the majority of the legislature in the future and properly adapt the party’s growing voice to Taiwan’s independence. But how can President Tsai properly deal with the situation in which the “DPP has been elected as the majority in the Legislative Yuan and the growing number of Taiwanese independence forces within the party?” This will be a potential problem.

After the amendment to the PRC’s constitution to abolish term limits, President Xi Jinping would like to seek a higher historical legacy for himself. Whether the CCP will compromise with the Tsai government, which reflects Taiwan’s overwhelming public opinion, or whether it will take tougher measures, will be another major challenge to future interactions between Taiwan, the United States, and China for years to come.

Chang-Ching Tu is the Taiwan senior fellow in the Atlantic Council’s Scowcroft Center for Strategy and Security and assistant professor at the ROC (Taiwan) National Defense University.

As world leaders attempt to halt the spread of the novel coronavirus, the United States has been correct to take “a soft touch approach to the relationship with Beijing,” former US homeland security advisor Thomas P. Bossert said at the Atlantic Council on February 11.

2020 could mark a significant year for the emerging, generational clash between democratic and authoritarian capitalism.

Democracy under siege: Advancing cooperation and common values in the Indo-Pacific