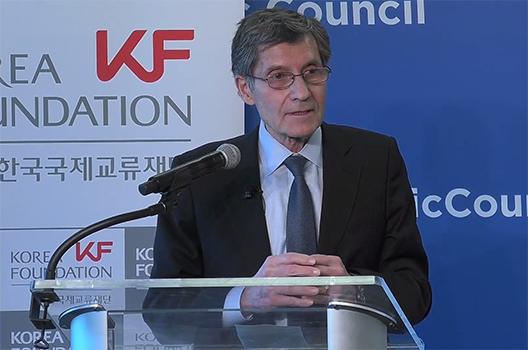 As Washington and Pyongyang pick up the pieces following the abruptly concluded summit between US President Donald J. Trump and North Korean leader Kim Jong-un in Hanoi last month, the two sides have an opportunity to reassess their positions. Some former officials believe that there is, in fact, reason to be hopeful.

Kim “needs a different kind of future for [North Korea] and his regime, and he’s prepared to take some risks to do it,” said Kathleen Stephens, a former US ambassador to South Korea.

Alexander Vershbow, another former US ambassador to South Korea who is currently a distinguished fellow with the Atlantic Council’s Scowcroft Center for Strategy and Security, agreed that there are reasons to be hopeful based on Kim’s statements that he wants to shift from basing his regime’s legitimacy on military power to economic development. “But will that translate into full denuclearization or will he try to keep some nukes, get normalization, and have his cake and eat it too,” Vershbow wondered aloud.

Joseph DeTrani, who served as the US special envoy for Six-Party Talks with North Korea from 2003 to 2006, said: “The best scenario, in my view, for Kim Jong-un would be to have a normal relationship with the US, the Republic of Korea (ROK), Japan; get out of isolation; foreign direct investment coming into the country; interact with financial institutions; become a legitimate nuclear state and still maintain some nuclear capability.”

“We have had these discussions and this is what they have said: ‘Treat us the way you treat Pakistan,’” said DeTrani. “That is their ultimate [goal]. But if they can’t get that with a nuclear weapon, [Kim] is a young man who doesn’t want to live in isolation as a pariah state for the next thirty, forty years. He wants to change things and that is going to be the price of change,” he added.

Stephens, Vershbow, and DeTrani took part in a panel discussion at the Second Annual Atlantic Council-Korea Foundation Forum in Washington on March 5. They were joined on the panel by former South Korean Foreign Minister Young-kwan Yoon and Byung-jae Cho, a former chancellor of the Korea National Diplomatic Academy. Paula J. Dobriansky, a former US undersecretary of state and an Atlantic Council board director, moderated the discussion.

The Trump-Kim summit in Hanoi on February 27 and 28—the second time that the two leaders have met since their historic first summit in Singapore on June 12, 2018—ended abruptly.

Trump explained he had ended the talks because Kim wanted all sanctions to be lifted in exchange for dismantling North Korea’s most important nuclear facility—the Yongbyon enrichment facility.

“Sometimes you have to walk,” Trump said at a press conference in Hanoi, explaining his decision.

North Korea responded with the unusual step of calling a middle-of-the-night press conference at which Foreign Minister Ri Yong Ho disputed Trump’s account. He said Pyongyang only sought partial sanctions relief in exchange for an offer to dismantle the enrichment and plutonium production facilities at Yongbyon.

A senior US State Department official later clarified that the North Koreans only asked for the lifting of sanctions that impede the civilian economy and people’s livelihood, not those on armaments, which were imposed after North Korea conducted its first nuclear test in 2006.

“Despite the very welcome reduction in tensions… the Hanoi summit’s conclusion made it clear we have got a long road ahead of us,” Atlantic Council President and Chief Executive Officer Frederick Kempe said in opening remarks at the event on March 5.

Kempe said the post-Hanoi summit period also presents an opportunity to strengthen the US-South Korea alliance and “preparing it for all contingencies we may face in the future.”

In his opening remarks, Korea Foundation President Sihyung Lee said: “Although the summit is seen by many as a failure, we can take comfort in President Trump’s assurances that his door remains open to Kim Jong-un.”

Lee noted that the North Korean media had reciprocated by “neither describing the Hanoi summit as a failure nor using hostile words toward the US.”

Lee said South Korean President Moon Jae-in has taken up Trump’s suggestion that he work to bridge the gap between the United States and North Korea. “The ROK government is currently trying to grasp what really happened in Hanoi and what caused the two leaders to leave the room emptyhanded,” he said.

Stephens, who currently serves as president and chief executive officer of the Korea Economic Institute, contended that South Korea is perhaps most eager to see a successful outcome of Trump-Kim diplomacy. A failure of that effort could set back Seoul’s plans to engage with North Korea.

Vershbow, while acknowledging that limited sanctions relief could be provided to allow the reactivation of inter-Korean cooperation in the event of progress on denuclearization, suggested that the South Koreans need to “cool down and go slow and not push the US before it is ready to agree to these kinds of waivers because we need to maintain our leverage and we need to have a combined approach so the North Koreans can’t play us off against one another.”

While expectations of a visit by Kim to Seoul is uppermost on the minds of the South Korean leadership, Yoon, the former foreign minister of South Korea, suggested that Moon prioritize travel to Panmunjom, the peace village on the border between the two Koreas, for a meeting with Kim.

At Panmunjom, where Kim and Moon first met on April 27, 2018, the South Korean leader should help Kim reformulate his position on denuclearization, listen to his concerns, and then deliver the message to Trump, said Yoon.

Following the Hanoi summit, the United States and South Korea agreed to end two major military exercises in an effort to reduce tensions with North Korea. Trump tweeted that this decision was taken “to save hundreds of millions of dollars for the US for which we are not reimbursed.”

DeTrani counted the suspension of US-South Korea military exercises and North Korea’s freeze of nuclear and missile tests as among the positive outcomes of US-North Korean diplomacy. “These are confidence-building measures,” he said.

Stephens said South Korea has taken on a much larger role on the denuclearization issue, which has become “more Korea Peninsula centric.”

“The plates are kind of shifting between North and South Korea,” she said.

While acknowledging that what’s happening between the two Koreas is “quite extraordinary,” Vershbow was not quite convinced that Pyongyang has given up trying to delegitimize South Korea.

DeTrani said that while he was disappointed with the outcome of the Hanoi summit, he was certainly not surprised. “You just don’t have a country that has spent billions of dollars and decades building a nuclear and missile capability to give it up that quickly,” he said.

“What North Korea needs for its survival is a normal relationship with the United States and the Republic of Korea,” said DeTrani. “That’s the security assurances you are looking at… this is what they want.”

Yoon said the Hanoi summit should have taught Kim that without committing to complete, verifiable, and irreversible denuclearization it would be very difficult for him to expect the United States to lift all sanctions.

What the Hanoi summit highlighted were the differences between the United States and North Korea on how to address the question of denuclearization, said Cho. The North Koreans have for years been demanding an action-for-action approach. The United States, on the other hand, favors a “simultaneous and in-parallel approach,” he said.

“We don’t know exactly what in-parallel means and what phased means,” Cho said. But, he added, North Korean officials have indicated that “as mutual trust builds up, they will take additional denuclearization measures.”

“This has been a good occasion where the two sides were able to understand each other’s position far better than before,” said Cho.

Noting that both Trump and Kim left Hanoi emptyhanded, Stephens said: “If both sides decide no deal is better than a bad deal, what does a good deal look like?”