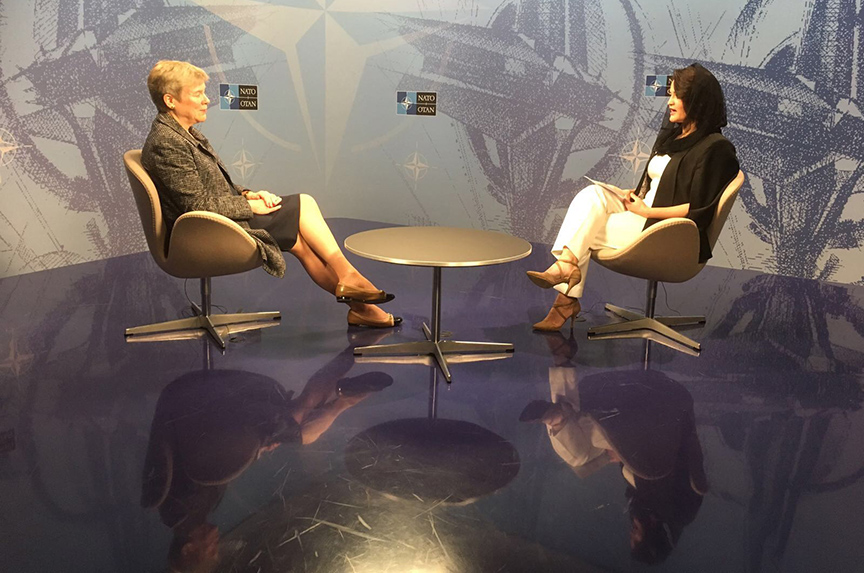 Life for women in Afghanistan has seen many advances since the end of Taliban rule, but the country still ranks poorly when it comes to gender equality. Spousal abuse and child marriage are rampant, while the criminal justice system is ill-equipped to handle complaints from women. Societal silence on these issues compounds the cultural cage in which many Afghan women are forced to live.

But there are many women breaking out of that cage in dramatic fashion and some of them are literally broadcasting their views. Afghanistan’s first female-oriented, female-run station, Zan TV, started operations in May of 2017. It is the brainchild of media entrepreneur Hamid Samar, who provides 100 percent private funding. All reporters, anchors, and, most importantly, news content decision makers, are women.

“No man comes here and decides what angles we should cover,” said Zan TV Chief Executive Officer Setara Hassan, “and that is, I think, very, very important… if you want to claim… to be a voice for women of Afghanistan.” While the media environment in Afghanistan is teeming with stations, most are male-dominated. “It’s hard for a woman to get a job and get a senior position, so they usually are not the decision makers,” she noted. “They report for somebody who has decided an angle or an area that is, again, from a man’s perspective.” In this respect, however, she noted Afghanistan is not so different from any other country.

Hassan was born in Afghanistan, but her family fled as refugees, first to Pakistan and eventually to Denmark, where she spent her formative years. Yet the call of her homeland was too strong and, going against her parents’ wishes, the 30-year-old Hassan moved back to Kabul to help run the station.

Zan TV’s programming focuses on topics considered taboo by some segments of the Afghan population. “There’s a lot to cover,” Hassan said with an ironic chuckle. “We might consider going to other ideas later in the TV’s lifetime, but at the moment we are covering all issues in regard to women.”

A recent series involved “16 Days of Activism” aimed at preventing violence against women. One episode focused on sexual harassment of women, sparked by the Harvey Weinstein scandal in the United States, and included a representative of the Afghan Ministry of Information and Culture. Another featured a university professor discussing violence against women from the perspective of Islam.

Threats unfortunate part of the program

The target audience is not, however, just female. “We all know a developed country is not possible without women being active participants [in] the society, of the political decisions,” Hassan explained, so “we also focus on men understanding the importance of including women.”

The station has suffered some repercussions for its fearlessness in being what some Afghans consider provocative. Hassan says the station’s Facebook page recently got a post from someone disparaging the anchors as being against Islamic values for appearing “half naked” on TV screens—that description because some of them have hair visible beneath their headscarves. The poster supposed it would be acceptable in the eyes of Islam to kill the women because of this.

“That is, of course, very disturbing, very, very disappointing,” Hassan lamented sadly, “to see that people in this day and age have this kind of views and dare to share them on Facebook and other people dare to like it and comment [on] it and encourage those kind of ideas.” But she said at the same time such views make her even more motivated to reach those people and change their mentality.

Empowering women to understand their rights

And she’s not just talking about men. “It’s very important that we change the perspective of women themselves about their own abilities and their own rights and that’s something that is quite missing,” she said. “I find a lot of women do not know that they have 100 percent equal rights in the eyes of the constitution of Afghanistan and that if people harass them or are conducting violence against them, they’re criminals and should be punished.” Hassan pointed out that accepting too much violence in their lives is hardly a concept limited to Afghan women.

She explained her five-year strategy for Zan TV programming will include attention to empowering women politically, socially, psychologically, economically, and religiously with a special focus on women and security.  “My long-term goal is equal rights, equal participation, equal opportunities for men and women in Afghanistan,” Hassan said. She hopes that could happen by the timeline of the United Nations’ Sustainable Development Goals, which envision eliminating violence against women by 2030.

“I would be extremely proud if I said that by 2030 I sat there and said we contributed a whole a lot to that agenda and… [that] Afghanistan is not behind everybody else in becoming equal for men and women,” she said, smiling.  “That would be my biggest dream come true.”