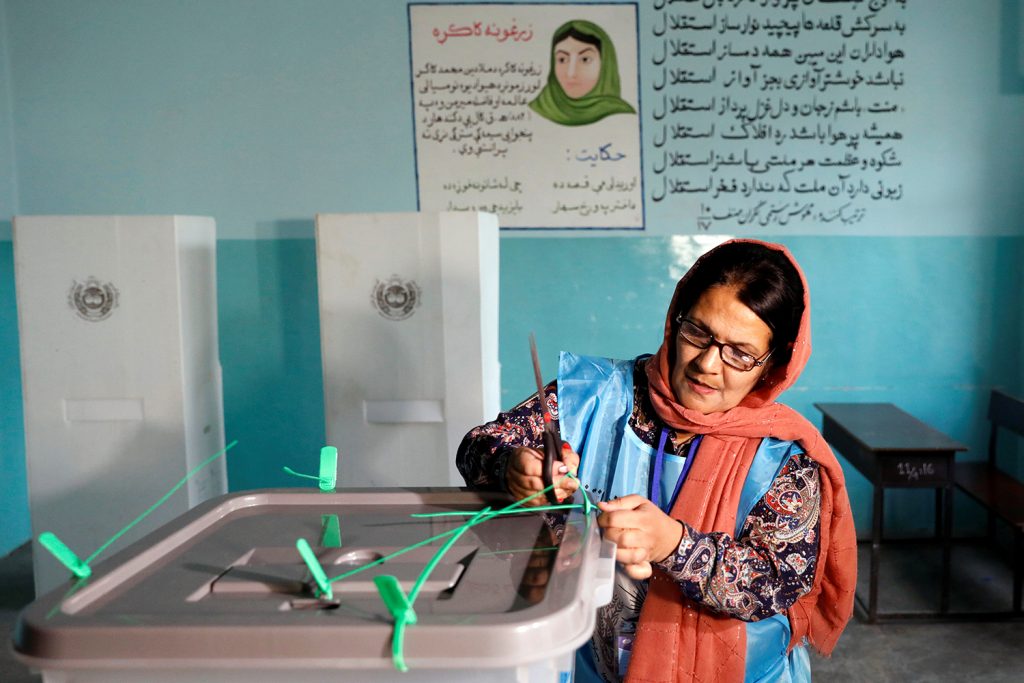 After decades of conflict, today there is at least a prospect that a path to peace in Afghanistan might be opened. At the same time, it seems that once again the country is at a crossroads, with its future to be determined by decisions that will be taken in the coming weeks by Afghans, their partners, and their adversaries. Those decisions can set the stage for further success in the hard struggle of the Afghan people and their elected leaders for the better future they are striving for.

In the best case, down this road would be a genuine peace negotiation. Alternatively, the decisions to come can lead to a breakdown in Afghan politics, conflict among Afghanistan’s political class and civil society, an end to hopes for a peace process, and the erosion of international support. An accepted outcome of the presidential elections, where results are still pending, will be critical to avoiding this second scenario. Afghanistan’s leaders have a tremendous responsibility to preserve the future for the Afghan people. While strong international and military support remains in place, only Afghanistan’s leaders can chart the course for their country’s future. The time to decide is now upon them, and failure is a terrible option.

In recent days there have been indications of significant shift in the context for Afghanistan developments. The Trump administration’s decision to authorize Ambassador Zalmay Khalilzad’s renewed effort to engage with the Taliban and resume discussions is to be welcomed. The only way to end the conflict is through negotiation. In addition, US President Donald J. Trump has indicated he will continue to maintain US forces in Afghanistan and not withdraw them to zero at this point, while continuing their key missions of combating terrorism and supporting and training the Afghan security forces. The US president has also stated that he now regards a ceasefire as a key component for continued discussions with the Taliban, and apparently has also acknowledged the role that the Afghan government and political leadership must play in negotiations. He also has signaled that going forward the US military campaign will continue absent an agreement with the Taliban. These are positive developments, correcting key deficiencies of the emerging US-Taliban agreement that the president rejected in September.

It seems possible that the United States is now more directly gearing an agreement on the presence of US forces in Afghanistan to the achievement of a serious intra-Afghan negotiation and to the outcome of that negotiation. With the resumption of US-Taliban discussions, clarity on this will be crucial to reshaping Taliban expectations and goals—which to this point are aimed at securing the removal of US forces from Afghanistan and the restoration of the oppressive Islamic Emirate. The intent of the United States and its allies must be made clear and concrete, as promised at the recent London NATO Summit where Trump joined Allied leaders in reaffirming their commitment to the long-term security and stability of Afghanistan.

Altering Taliban calculations about a political settlement has been, and will remain, exceedingly difficult but necessary. Doing so will require, as is well known, changing Pakistan’s strategic calculations and behavior. Washington has so far failed in that effort, and has yet to bring to bear a maximum pressure approach, coupled with incentives from the United States and the international community, which will make clear to Pakistan’s government—and especially its military leadership—that the time has come to act, not speak, in favor of peace. The Taliban must be constrained in their activities and brought to conclude that the outcome they envision is not in the cards. This is a political and diplomatic task, for which the military instrument is necessary but insufficient. The United States and its many partners and allies in Afghanistan dispose of tremendous political and economic power, which must be brought to bear to influence the prospects for peace.

Afghanistan today is an Islamic Republic, not an Islamic Emirate, and the vast majority of Afghans wish it to remain so. It should not suffer the loss in any peace agreement of the many democratic, economic, and social achievements of the past almost-two decades. The 2019 Asia Foundation Survey of the Afghan people found that 89 percent of Afghans support efforts to negotiate peace, and 64 percent still believe that reconciliation is possible. But not at any price. Some 80 percent of them, in a country struggling with education and literacy, consider preservation of freedom of speech and freedom of the press as very or somewhat important to be protected in any peace agreement. Some 65 percent of Afghans would oppose a peace agreement that endangered women’s education or the ability to work outside the home. 85 percent say they have no sympathy with the Taliban. Reconciling the Taliban to today’s Afghanistan will be a challenging task that only Afghans themselves can tackle.

Doing so requires a legitimate government and a degree of political stability. Afghanistan has been a fractious democracy and elections have always produced tension, charges, and counter charges. Its elections are decidedly imperfect, as are those of many other democracies. But Afghans value democracy and the right to vote, and have done so over the years in the face of consistent threat of violence.

In the hotly contested 2014 presidential election, the most intensive UN vote audit ever performed did not find sufficient fraud to change the preliminary results determined by the relevant Afghan election body, the Independent Election Commission (IEC). The IEC is again struggling under pressure from multiple quarters to produce the results of the September 2019 presidential elections; in seven provinces protestors are impeding the required recount of ballots. That difficult, dynamic process must play out, the IEC must be allowed to do its job ,and when results are announced they must be respected. For its part, the IEC needs to make clear the rationale for its actions and decisions.

Mindful that a second round of elections may be called if no candidate wins a majority, the ability of the Afghan political class to compose its differences, refrain from conflict and focus on the future of the country, and of democracy in the Islamic Republic, is more critical than ever.  There should be no illusion, the responsibility for the future of the country, and for Afghan politics, is in Afghan hands.

James B. Cunningham is a nonresident senior fellow with the Atlantic Council’s South Asia Center. He served as US ambassador to Afghanistan from 2012 to 2014 and was also the US ambassador to Israel and the United Nations.

In Afghanistan’s fourth election since the US invasion in 2001, and after eighteen years of war, nearly three million Afghan citizens took to the polls on election day despite continued attacks from the Taliban.

US-Taliban negotiations: How to avoid rushing to failure

A major troop withdrawal must be contingent on a final peace. The initial US drawdown should not go so far or so fast that the Taliban believe that they can achieve military victory. In that case, they will not make compromises for peace with other Afghan political forces.

Is there art in the Afghan deal?

The Taliban’s version of peace would likely not be acceptable to the majority of Afghans or the international community.

New Atlanticist by James B. Cunningham