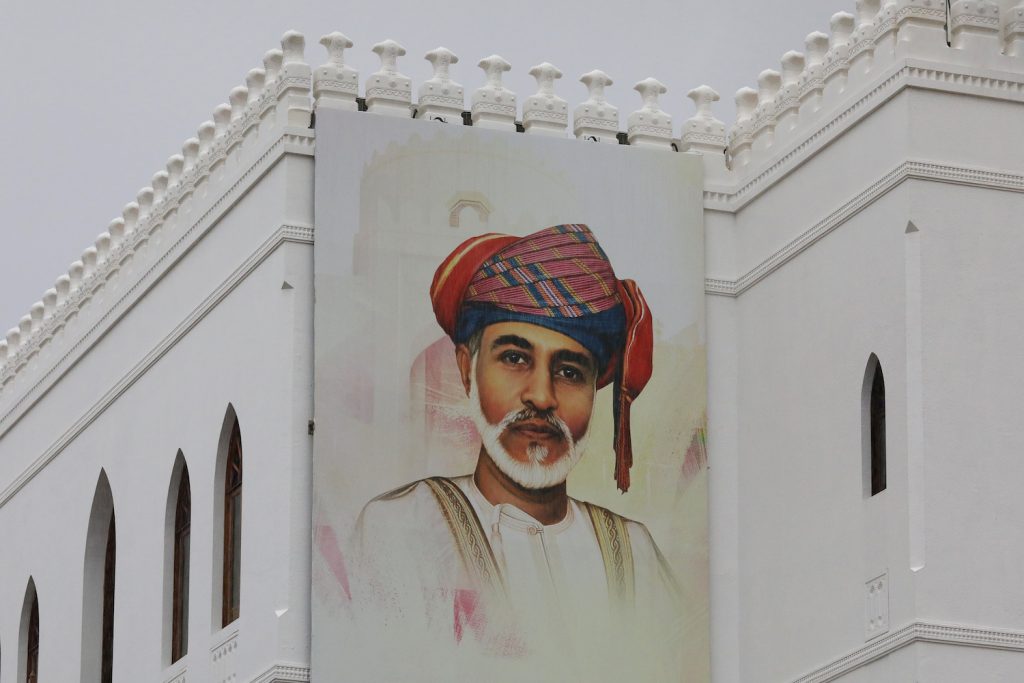 A painting of Oman's Sultan Qaboos bin Said is seen on a building in Muscat, Oman, January 11, 2020. REUTERS/Christopher Pike

Sultan Qaboos bin Said Al Said, the ruler of Oman for almost fifty years, died the night of January 10 and was laid to rest January 11. He was a remarkable man who dedicated himself to building a modern Omani state and put Oman on the world map as an international center of dialogue and reason. He was also a steadfast and reliable partner of the United States through many regional crises and conflicts. As US ambassador to Oman from January 2016 until December 2019, I had the good fortune to attend his meetings with visiting US officials as well as several personal meetings, where I studied and absorbed his unique worldview. While much of his story is well known, I am writing these lines to provide some personal insights that hopefully will shed additional light on the views and actions of this exceptional Arab ruler at the end of his reign.

The story of his life and rule is exceptional in its own right. Born the only son of Sultan Said bin Taimur Al Said in the southern Omani port city of Salalah in 1940, Qaboos bin Said received a traditional Arab and Islamic education and then was sent to the UK for education and military training at Sandhurst, followed by military service in West Germany with a Scottish regiment. Returning to Oman after a private trip around the world, his movements were restricted by his father’s orders for about six years. He reportedly used this time to deepen his studies of Islamic and world history and politics. By July 1970, Oman’s British allies were deeply concerned that Sultan Said would not be able to defeat a Communist-backed insurgency in the southern region of Dhofar. The British organized a bloodless coup that put Sultan Qaboos on the throne and packed his father off to London, where he died two years later.

In his early years as sultan, Qaboos enlisted the aid of the Shah of Iran and King Hussein of Jordan, as well as the British, to defeat the Dhofar insurgency. He then managed to unite Oman’s fractious tribes and regions through astute use of patronage and the power of his charismatic personality. He brought veterans of the Dhofari rebels into senior positions in his government. And with the development of Oman’s oil industry, Sultan Qaboos directed the country’s newfound wealth into a concerted program of developing infrastructure, health care, housing and education, making Oman one of the world’s most rapidly developing countries given the stark poverty that prevailed before 1970. In tandem with these efforts, Qaboos developed and staffed the institutions of a modern Omani state. Opening the door to educated Omanis who had been exiled in the early 1960s from Oman’s former African colony of Zanzibar, Qaboos also gained the support of Oman’s traditional merchant families, who turned from importing rice to the import of automobiles and modern consumer goods.

Oman has thrived for almost fifty years, with the economy slowing only recently with the downturn in oil prices in 2014. The slowing of the economy coincided with Sultan Qaboos’ cancer, which he fought bravely for more than five years before it finally claimed him. Despite his illness, Qaboos continued to rule Oman with wisdom and caution, declining to join Oman’s Saudi and Emirati neighbors in their military campaign against the Houthi rebels in Yemen and remaining neutral in the Saudi-Emirati-Bahraini-Egyptian “rift” with Qatar. Even in his last years he found the strength to launch new initiatives that benefited US interests, including his instructions to Oman’s intelligence service to secure a series of releases of about a dozen Americans held by the Houthis in Yemen and their repatriation via Oman; his hosting and night-long engagement with Israeli Prime Minister Benjamin Netanyahu in October 2018; and his efforts to convince Iran’s leadership to engage the Trump administration diplomatically, even while Oman scrupulously enforced US financial and trade sanctions on Iran and hosted the US Navy aircraft carrier task force assigned to deter Iranian aggression.

I found Sultan Qaboos to be remarkable as a thinker and man of culture as well as a political leader. He was a renaissance man who loved both military marches and Beethoven’s symphonies as well as more traditional Arab music. An invitation to dine with him at his palace came with the added pleasure of an extended live performance by either an Omani string quartet or a military brass band throughout the meal. He took great pride in his establishment of an Omani symphony as well as a world-class military brass band that even included a contingent of Jamaican steel drums. He left an indelible mark on Muscat’s architecture with the Grand Mosque and the Muscat Opera House, both stunningly original structures that he commissioned. A follower of the Ibadi stream of Islam, Sultan Qaboos despised dogma and all kinds of extremism. Religion, he would say, is an intensely personal matter and its practice should not be dictated by clergy or political leaders. Qaboos advocated for women’s rights, insisting on women’s education and seeking to increase the number of women in government positions. The first female Arab ambassador in Washington, the highly respected Hunaina Al Mughairy, was appointed on his instructions more a decade ago.

Much is written about Oman’s relationship with Iran, and much of it is simply wrong or at best misinformed. Qaboos’ long-time political adviser Dr. Omar Al Zawawi told me shortly after I arrived in Muscat that Qaboos was deeply affected by the support he received from the shah, who sent hundreds of Iranian soldiers, many of whom died in battle, to fight the Dhofari rebels. After the Iranian revolution, according to Al Zawawi, the new Iranian leadership was suspicious of anyone who was close to the shah. But Qaboos persisted in trying to maintain good relations and eventually the Iranians accepted his good intentions.

Much has changed since the early 1980s. Having made the transition as ambassador from the Obama to the Trump administrations, I held countless engagements with Omani officials about Iran and its relations with Oman. Their consistent talking point to me was that Oman’s relations with Iran are “normal” but not “exceptional” and would never come at the expense of Oman’s relations with the United States. Sultan Qaboos believed in the value of dialogue and senior Omanis describe their role as maintaining a “window on Iran” for the rest of the Arab Gulf states. At the Ministry of Foreign Affairs, I was told that, sooner or later, the United States will want help engaging Iran, and Oman will be ready to help when that time comes. In fact, as tensions with Iran escalated over the past summer, there were reports that Iran had rebuffed Oman’s offers to mediate. The desire to help is certainly there, and Oman has credibility in both Washington and Tehran, but it may be easier for more distant neutral countries such as Switzerland to play this role given the intensity of Iranian hostility and as the determination of the Trump administration to further increase its “maximum pressure” campaign. It is important to recognize, however, that despite Oman’s strong interest in maintaining dialogue and normal relations with Iran, Oman has not flinched from enforcing US sanctions, the details of which are a source of regular exchanges between the US Treasury Department and the Omani Central Bank and Ministries of Finance and Commerce.

I paid my farewell call on Sultan Qaboos on November 13, making me the last American official to meet him. He was visibly struggling with his illness, yet he went ahead with our meeting; I believe it was a gesture indicating the importance he placed on Oman’s relations with the United States. We talked about my family’s decision to remain in Oman for a few years after my retirement and he wished me success. The rest of our conversation was mostly about his desire to see an end to the war in Yemen and his hopes that Oman’s differences with Saudi Arabia would fade as that war wound down. He was clearly concerned by the divisions among the Gulf states but hopeful that events were moving in the right direction. I am sure he was pleased in his last days by various indications that the Gulf states’ attitudes are starting to move back into alignment and that the isolation of Qatar is starting to come to an end.

Looking to the future, Omanis reacted with a huge sense of relief to the announcement that Qaboos’ cousin, Sayyid Haitham bin Tarek Al Said, would succeed him as sultan. The smoothness of the succession and the complete calm in the streets of Muscat are clear indications that the Omani leadership and royal family are united and ready to move forward even as they mourn the loss of their beloved Sultan Qaboos. In the days and weeks ahead, Sultan Haitham bin Tarek and the people of Oman deserve the strong support of their friends, especially the United States. A clear statement of US commitment to Oman’s sovereignty and territorial integrity would go a long way in calming Omani concerns about possible foreign interference. American companies and investors can also help by taking a fresh look at the many opportunities for investment and partnerships that Oman offers. Under Sultan Haitham’s leadership, Qaboos’ legacy of strong partnership with the United States will no doubt continue for many years to come.

Ambassador Marc J. Sievers retired in December 2019 as a career member of the senior foreign service. His most recent posting was as US Ambassador to Oman from January 2016 until December 2019.