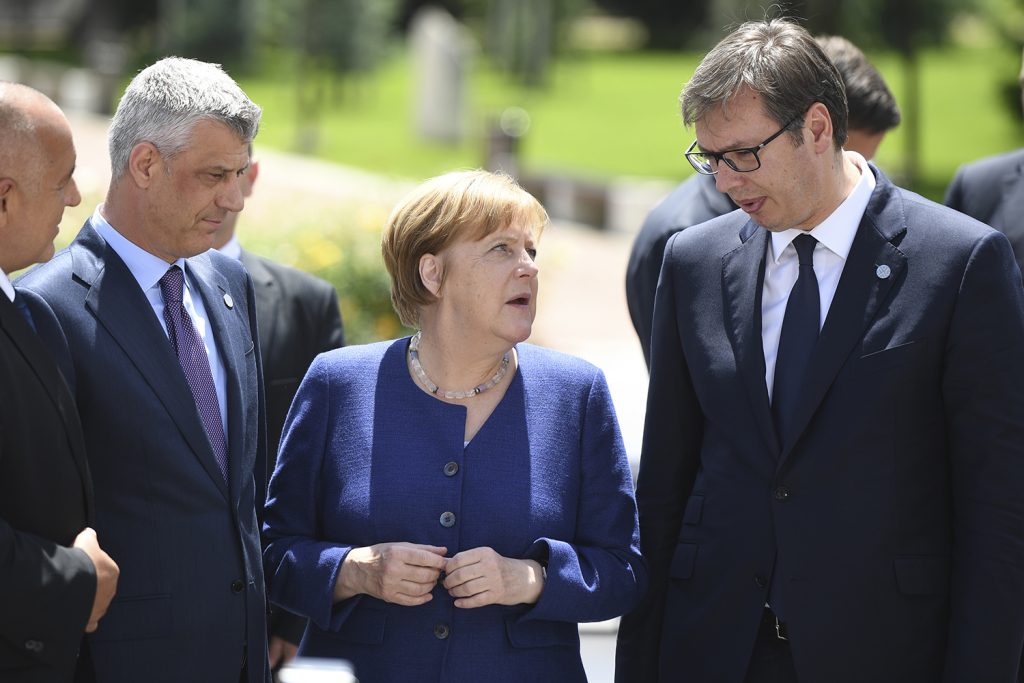 Germany's Chancellor Angela Merkel, Kosovo's President Hashim Thaci and Serbian President Aleksandar Vucic pose among other heads of state during the family photo at the EU-Western Balkans Summit in Sofia, Bulgaria, May 17, 2018. Vassil Donev/Pool via Reuters

Kosovo will undergo snap parliamentary elections on October 6 after the July 19 resignation of Prime Minister Ramush Haradinaj. These elections will be a critical determinant of the foreign policy direction Kosovo will take in the months ahead as preparations are underway to resume negotiations for the normalization of relations between Kosovo and Serbia.

There is new momentum on both sides in favor of normalizing relations that could lead to a legally binding agreement ensuring full mutual recognition as two independent and sovereign states. The new European Commission in November will facilitate these talks and Matthew Palmer’s appointment as US special representative for the Western Balkans by US Secretary of State Mike Pompeo could give new impetus to the process.

The talks between Kosovo and Serbia have been at an impasse as Pristina complains about Serbia’s diplomatic efforts to convince other countries and international organizations to oppose recognition of Kosovo, while Belgrade is angry over Kosovo’s tariffs against Serbian goods placed in response.  Although both countries have long had a difficult relationship, a lack of European engagement pushing the resumption of talks has left a nearly two year stalemate.

New High Representative of the European Union for Foreign Affairs and Security Policy Josep Borrell, the current Spanish foreign minister until November, will become the key facilitator in the Kosovo-Serbia talks. For Borrell, who comes from a country that does not recognize Kosovo yet, Kosovo will be a test of European leadership in the Western Balkans in the early days of his work.

But with the need for immediate action from the European Union on the Kosovo-Serbian issue, Borrell may need assistance as he takes up his new portfolio. The EU could appoint a special envoy on the dialogue, who would be directly engaged with Kosovo and Serbia. The lack of such an envoy in the past has limited the capacity of the EU to remain vigorously engaged in the dialogue and act as a significant facilitator.

With Borrell hailing from Spain, an EU envoy should come from an EU country that already recognizes Kosovo, thus creating a balance on the EU team that could be acceptable to both Kosovo and Serbia. But having a new envoy will not be enough to move forward with the process.

A new EU envoy should also act together with US Special Representative Palmer in the months ahead. Both the European Union and the United States must develop a common strategic goal for the process and communicate to both Kosovo and Serbia what is expected of them. While the United States has made clear its goal is mutual recognition, the European Union has no clearly defined desired outcome. The United States has shown readiness to consider different options, including border modifications, but some EU member states such as Germany and United Kingdom have been reluctant to consider this option, without offering any other alternatives.

The basic treaty between West and East Germany of 1972 that allowed the two German states to enter the United Nations without the need to recognize each other is not a model that will work for Kosovo. It will not resolve the problems between Kosovo and Serbia, it will postpone agreements on other key issues, and the European Union cannot ensure either that Russia and China will support it, or offer a concrete promise of EU membership for both Kosovo and Serbia. As we have seen in Ukraine, the Europe of today is not immune to the challenge of borders, and disputes like the Kosovo-Serbia impasse require concrete solutions, not delays.

In general, all key Western countries agree that the any deal between Kosovo and Serbia should ensure Kosovo’s seat at the United Nations and remove one important obstacle to Kosovo and Serbia’s EU membership drives. But how to achieve that goal has yet to be answered by the EU, its key member states, and the United States. Unless the West acts united in the process, the chances for progress are grim.

The time frame for a finalized deal between Kosovo and Serbia is limited too. To have proper US involvement, it must end before the 2020 US presidential election campaign. The upcoming elections in Kosovo will produce a new government that will need to address normalization of relations with Serbia more seriously. Serbia is also expected to have parliamentary elections next year, meaning there is a tight window between November 2019 and March 2020 for serious diplomatic engagement.

Kosovo and Serbia should agree to a compromise that would require Serbia to stop its diplomatic campaign against Kosovo by notifying all member states of the UN that Serbia does not oppose the stance of the countries that have already recognized Kosovo. In return, Kosovo should suspend its tariffs to ensure the resumption of talks. This could be a good faith action by both countries.

The dialogue between Kosovo and Serbia is not just about these two countries. It has a broader strategic and geopolitical context. If both sides agree to normalize relations and mutually recognize each other, it will close finally the last chapter of the dissolution of the former Yugoslavia and end the long “cold war” in the Western Balkans. For Kosovo, it will ensure recognition from Serbia itself and from EU members Spain, Slovakia, Greece, Romania, and Cyprus. These countries would have no argument to delay such a step. The EU must ensure that such a recognition would be granted immediately after a successful outcome of the dialogue.

Recognition would unblock Kosovo’s chances to start the accession process for the European Union and would ensure Kosovo’s membership of NATO is accelerated. Moreover, Kosovo would be able to submit its application for membership in the United Nations. While there is no guarantee that Russia and China would not use a veto to block this move, recognition from Serbia would leave them with no justification for vetoes. Both Russia and China have signaled in the past that they would agree to any outcome to which Serbia agrees. But this requires European and US engagement with Russia and China. They cannot be ignored at the implementation phase of the outcome of the dialogue.

Explaining to the people of Kosovo and Serbia the process and benefits of the normalization of relations is vital. This also requires a jointly coordinated effort by Brussels and Washington to counter disinformation and propaganda attempts to hinder the process. Externally, Kosovo on one side and the EU and the United States on the other must explain the needs and benefits of such an agreement to neighboring countries, European countries, and other important players across the world to ensure wide international support. Proper communication in such a complicated diplomatic and political process is very much needed to address misunderstandings and lower opposition.

If the reunification of Germany opened the door of Western Europe and NATO toward the East, an agreement between Kosovo and Serbia will ensure the same outcome. It is a strategic and geopolitical process that will require compromises and considerable effort by all sides.

But the benefits are immense for both Kosovo and Serbia. It will ensure both countries can focus on the real challenges they face: the fight against corruption, building rule of law, economic reforms, and progress toward European accession. As long as the Kosovo syndrome exists in Serbian politics and the Serbian syndrome in Kosovo’s politics, there will be no genuine focus on the future.

Muhamet Brajshori is a member of the Foreign Service of Kosovo at the rank of ambassador who has served as advisor to consecutive foreign ministers of Kosovo and a Deputy Director-General of the Ministry of Foreign Affairs of Kosovo. The views are exclusively the personal views of the author. Twitter: @mbrajshori