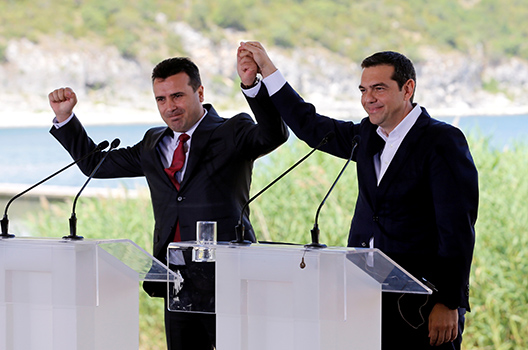 Greek Prime Minister Alexis Tsipras and Macedonian Prime Minister Zoran Zaev gesture before the signing of an accord to settle a long dispute over the former Yugoslav republic's name in the village of Psarades, in Prespes, Greece, June 17, 2018. (REUTERS/Alkis Konstantinidis)

On January 25, the Greek parliament approved a deal that will see its neighbor, Macedonia, renamed to the “Republic of North Macedonia”—a move that ends a twenty-seven-year dispute between the two Southeastern European countries.

The deal—known as the Prespa Agreement—was reached between Macedonian Prime Minister Zoran Zaev and Greek Prime Minister Alexis Tsipras in June 2018. The Macedonian parliament approved the deal on January 11. The agreement paves the way for the newly-minted North Macedonia to join NATO and potentially the European Union.

The Ohrid Group comprises senior international statesmen and diplomats who share a wish to see North Macedonia “prosper as a successful democracy with a flourishing economy and as a member of NATO and the European Union. Members of the Ohrid Group provided their reactions to the passage of the Prespa deal in the Greek Parliament on January 25:

“This is not just a historic day for North Macedonia and Greece but a monumental day for the Western Balkans.

“Among all the bad news in Europe today this agreement sends a robust message to the outside world that a Balkans tide is turning in a really positive direction.

“The farsightedness of the lawmakers in Athens and Skopje is to be admired. They have swept away decades of wasted time and can take huge credit for the breakthrough. The maps across the world will now be amended – the ‘Former Yugoslav Republic of Macedonia’ [FYROM] is dead and swept away. NATO membership is now to happen.

“The leadership of Prime Ministers Zaev and Tsipris has been an example to the world. Brave, bold, clever and wise; these politicians have delivered a settlement of historic proportions and deserve the highest praise.”

“As someone who was born and is living in the Balkans for all his life, I am so excited, full of hope and positive energy, that this unique achievement is giving an example to the world for political courage, wisdom, and bravery and is paving the way for sustainable peace in the Balkans.

“It is showing that beyond the shortsighted political games and pure national egoism, it is possible to take responsible decisions and make strategic agreements between neighboring states fully in the interest of the future generations.”

“Congrats to Alexis Tsipras and Zoran Zaev for leading this historic reconciliation between your countries. Now begins the work of becoming great allies and partners, anchoring a democratic, free, and peaceful Southeast Europe fulling within NATO and the EU.

“This agreement will restore [the Greek city of] Thessaloniki as the gateway port to Southeast Europe, reconnecting it to historic hinterlands in the Western Balkans and bolstering Greek economic and political weight in the region.”

“Macedonia and Greece did not negotiate as yesterday’s foes, but instead as tomorrow’s friends. Such an approach was the only one that could have made a breakthrough possible, which it eventually did.

“The opponents of this solution, not only in Macedonia and Greece but throughout Europe as well, continued to think in terms of the past, rather than the future—thus proving that the only world that exists in populists’ minds is the world of eternal foes.

“The breakthrough of the Prespa Agreement was only to be made by truly democratic governments—ones with profound respect for the rule of law, human rights, freedom of the media, and other core European values. Therefore, a political breakthrough was not really possible before the onset of substantial democratization in Macedonia proper, which took place in mid-2017.

“Macedonia is not a remote island, somewhere far away in the ocean—it is located in the middle of the Balkans, a region that has been contaminated by nationalist, war-mongering, xenophobic, and essentially anti-European policies for the last twenty-five years. Macedonia was actually the first country in the region to opt to leave such an environment for good. Macedonia thus has the potential to become a game-changer in a deeper, historical sense, and to stand at the forefront of new policies.

“It seems that wider international reactions to the Prespa Agreement have only confirmed that as the true friends of the European idea extended their genuine support, so did its adversaries tried to undermine Europe’s extension in the Balkans. In other words, the battle in Macedonia is not a battle for Macedonia only; rather, it is a struggle for the spirit that will eventually prevail in Europe at large.”