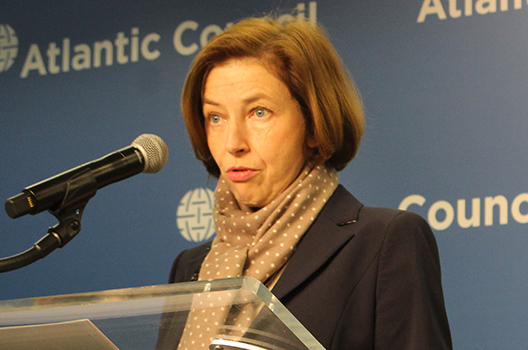 French Minister of the Armed Forces Florence Parly speaks at the Atlantic Council on March 18, 2019.

Amid continued criticism from US President Donald J. Trump about low defense spending levels in NATO countries, French Minister of the Armed Forces Florence Parly said France will “do our best, along with the Europeans, to take a larger share of the burden.” But, she continued, “we will call it ‘autonomy,’ and we will count on you to hear in this word nothing [other] than the bonds of a healthy, independent, and robust friendship.”

Despite concern about low European spending, Trump has also been critical of calls for European nations to form a common European defense force or strengthen their domestic defense industries. When French President Emmanuel Macron called for a “true, European army,” on November 6, Trump lambasted the idea, suggesting that it was an effort to “protect Europe against the US.”

Emmanuel Macron suggests building its own army to protect Europe against the U.S., China and Russia. But it was Germany in World Wars One & Two – How did that work out for France? They were starting to learn German in Paris before the U.S. came along. Pay for NATO or not!

Parly, speaking at the Atlantic Council on March 18, maintained that “building a European autonomy should never be seen as a move against the United States,” nor should it “be a reason for the US to be less engaged.” She argued that moves to strengthen Europe’s capabilities would help ease the burden off of Washington, especially as it shifts focus away from Europe and toward more pressing regions in East Asia and the Middle East. “We need to step up to help without waiting for the US to always foot the bill,” she said.

Parly noted that European countries have moved to strengthen their capabilities as the Continent’s “security environment has been sorely tested. In 2008, Georgia was torn into pieces. In 2014, it was Ukraine’s turn.”

Anxiety in European capitals has been heightened by Trump’s suggestion that Washington could condition its continued participation in NATO on increased European financial contributions to the Alliance. “They were not reassured,” Parly said, adding “They started to… wonder if the unthinkable might be slowly happening.”

Parly pushed back strongly on the US president’s threats to withdraw from NATO should partners not increase their spending. “The alliance should be unconditional, otherwise it is not an alliance,” she argued.

NATO Secretary General Jens Stoltenberg reported on March 14 that Alliance members had increased their defense spending in 2018 for the fourth year in a row. In the twenty-nine member Alliance, seven states, now including Latvia, Lithuania, and Poland, meet the 2 percent of GDP defense spending goal set at NATO’s Wales Summit in 2014. Romania is expected to meet that goal this year. France does not meet the goal.

Parly did concede that European partners must contribute more to NATO, saying that “the Europeans have a hell of a homework in front of them if they want to stand on their own two feet and really share the burden with America.” She said that France “fully support[s] the US insistence on the 2 percent” of GDP defense spending goal for NATO members and maintained that “France wants to be at the forefront of this effort.”

She tied this problem, however, directly with the lack of European autonomous capabilities, noting that the United States currently provides the Alliance with 91 percent of air tankers, 92 percent of its medium- and high-elevation unmanned aerial vehicles, and 100 percent of its strategic bombers and missile defense systems. Developing capabilities in these areas, she argued, would help lessen the burden borne by Washington and strengthen Europe’s ability to respond to crises without needing heavy lifting from the United States. Rather than seeing this strengthening as a threat, Parly continued, “autonomy should be a variation on friendship.”

Amid complaints from Washington about Germany choosing not to buy the American F-35 aircraft, Parly said that she was “concerned that the strengths of NATO’s solidarity might be made conditional on allies buying this or that equipment.” She explained that “NATO’s solidarity clause is called Article 5, not ‘Article F-35.’”

On @NATO, French Minister for the Armed Forces @florence_parly says Europe must enhance its defense capabilities, but “the alliance should be unconditional; otherwise it’s not an alliance.” Notes mutual defense clause is Article 5, not “Article F-35.” @AtlanticCouncil pic.twitter.com/8LDeKLJjuT

Parly also pushed back on Trump’s portrayal of NATO as a drag on US resources. “The Alliance is not a one-way operation. There is a strong pay-back for the United States,” she said. France, she explained, “has been America’s most effective ally,” pointing to the contribution of armed forces in the war in Afghanistan and the fact that Paris “was among the very first to enlist” in the US-led coalition to defeat ISIS in Iraq and Syria. Parly added that the 2013 French-led mission to prevent the overthrow of the Malian government by Islamic militants was an example of a European ally taking the lead in an operation while still enjoying “fantastic US support.”

Retired US Marine Corps Gen. James L. Jones, Jr., the executive chairman emeritus of the Atlantic Council, echoed Parly’s description of the value France provides the United States. “In the past decade alone, our two countries worked closely together to fight terrorism in the Sahel, to end ISIS domination of Syria and Iraq as members of the global coalition, to exchange operational military intelligence, and to cooperate on cyber defense capabilities,” he said.

While Paris and Washington have certainly disagreed on policy positions—from the Suez Crisis of the 1950s to the Iran nuclear deal today—Parly argued that this has never prevented France from “in practice being one of the most active allies in the field.”

Jones agreed, adding that “our two countries have disagreed or misunderstood each other in the past… but despite these policy differences the US and France are bound by liberal democratic values and common challenges, and cooperation does not stop when friends occasionally disagree.”

Parly argued that France’s ability to help the United States will only continue in the future. “You can count on us,” she said. “We will be there. Not only for today’s wars, but also for those of tomorrow.”